How to Lose Traffic and Alienate People 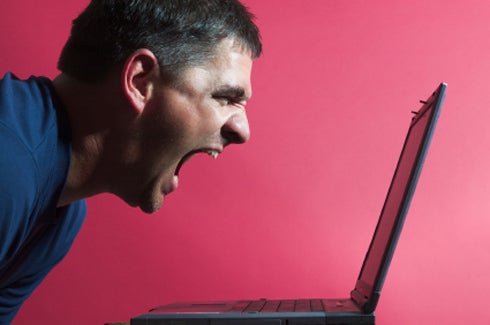 Whether you want to call it “2.0” or not, the fact is that a better, stronger, faster Web experience is quickly replacing the old one, and there’s a lot out there to be psyched about. But, for every Google Maps, Facebook and Flickr that does (most) everything right, there are a thousand more Web sites out there still clinging to archaic, annoying and even deceptive practices. What the operators of these sites fail to understand is that forcing me to endure these “experiences” is worse than not having a Web site at all. If your site employs any of the following, I recommend you shut down immediately and reopen only after you’ve taken out the garbage.

1. Old-School Mapping
Even MapQuest and Yahoo! Maps have finally (almost) caught up technologically to Google. So, with all of these slick, Ajaxified options to choose from, it blows my mind whenever I come across a site that links to a mapping 1.0 service like MSN Maps & Directions. Actually, I’m shocked that something like MSN Maps & Directions is even allowed to exist. Trying to locate an address on this abomination is like being transported back to a time when people used the word “cyber.” Zooming in and out or moving East and West sends you off to an entirely different Web page instead of bringing new views of the map to the page you’re already on. The only thing worse? “Contact Us” pages that still use a static screen grab of a 1999-era MapQuest grid to show their location.

2. CAPTCHAs
I hate these things. I just about lose it every time I’m forced to decipher that cruel puzzle of impossible-to-read words that challenges me as I’m submitting a form. Just the other day, I had some Ticketmaster seats sell out while I sat there wondering if my computer was really asking me to type in “Heroin Lembeck.” The idea behind CAPTCHA is that malware isn’t able to read the distorted type, and so the site you’re on knows that an actual factual human being is buying tickets, posting to a forum, or whatever. But here’s the catch: Computer programs have gotten wise to these wonky words, and so CAPTCHAs have had to become increasingly more intricate. The result? If they’re not easy for a machine to crack, then they’re impossible for a human to read. A computer now has a better shot at scoring those great seats than you do! I’ve seen audio and photo CAPTCHAs being used on a few sites, but now even those are susceptible to hackery. I don’t know what the solution is, but CAPTCHA is too much of a burden on the user to justify its dismal success at foiling any funny business.

3. Suspect Search Results
There are a few sites out there that seem to have the whole Google thing pegged and I’m really tired of seeing their crappy, irrelevant pages show up in my search results. No matter what in the world you’re searching for (and depending on the category), these sites consistently pop up in the top 10 with what appear to be Web pages dedicated to your query. It’s only when you click on the links that you realize you’ve been duped. Type “Major League Baseball 2K9” into Google. That is a video game which isn’t coming out until March and, as you’d expect, there’s almost no information on it. But look at these Google search summaries:
• “IGN is the ultimate Major League Baseball 2K9 resource for trailers, screenshots, cheats, walkthroughs, release dates, previews, reviews, soundtracks and news.”
• “GameSpot offers reviews, previews, cheats, and more. Count on us for all of the latest on the Major League Baseball 2K9 Xbox 360 Game.”
• “GameSpy is the most complete source for Major League Baseball 2K9 trailers, screenshots, cheats, walkthroughs, release dates, previews, reviews, soundtracks and news.”
• “GameStats has the largest collection of Major League Baseball 2K9 trailers, screenshots, cheats, walkthroughs, release dates, previews, reviews, soundtracks and news.”
Every single one of these is a lie. Not one of these sites has anything close to what they claim to offer. Someone over there figured out the precise combination of meta tags and keyword percentages to use in order to get noticed by Google, and that’s all you’re going to find there. Some folks might argue that it’s all just a big game and that you can’t blame these guys for figuring out to win it. As a frustrated user, I couldn’t disagree more. It’s dishonest and in the end I think it actually undermines Google’s credibility.

4. Tooltip Ads
Surely there’s a special place in Hell reserved for the sites that mislead users with this incredibly distasteful advertising tactic. If you ever spot a link on page that has two underlines instead of one, avoid it at all costs. This is an ad—it’s not content. When the page you’re on finished loading, an algorithm went through and sniffed for keywords associated with the site’s (or more likely, a third party’s) advertisers. The keywords themselves then became the ads. Of course, that’s only the half of it. You don’t even need to click on these faux links to be pestered by them. Simply mousing over a keyword—even if by accident—spawns a tooltip window that hovers above your pointer and contains a miniaturized advertisement. As a bonus slap in the face, your browser may even freeze up temporarily as the ad loads. If you do happen to click or mouseover one of these things, don’t be too hard on yourself. With names like IntelliTXT” and “ContentLink,” it’s an easy mistake to make.

5. Bottomless Dropdowns
The dropdown menu has become such a ubiquitous way of organizing Web site content that I’m actually surprised whenever one doesn’t magically pop out from beneath a navigation item I’m hovering over. I don’t much care for dropdowns because I think they show a lack of creativity, but I do appreciate—when used properly, elegantly and sparingly—their ability to cut down on the number of pages I have to trudge through before reaching my final destination. What I can’t stand, though, is when each option inside of a site’s dropdown menu splits off into more submenus, each of which splits further into even more submenus. You’ve seen this, right? It’s as if every single last page of the site has been made accessible from the main menu. That’s not helpful at all. It’s confusing and unnecessary. Though they’ve changed things up recently, the Verizon Wireless dropdown menu at one point actually had an account login form buried inside of it if you went deep enough. Now, that’s just overkill.

6. Audio Ads
These days, nearly all rich-media advertisements load with the sound turned off by default. Advertisers have listened to user feedback and they know that’s how we prefer it. But, I’d love to be in the meeting where a Web site’s advertising person convinces the rest of the staff that it’s a great idea to run those blood-curdling audio ads of a loud female voice congratulating visitors on winning a free iPhone. How could a human being possibly justify such a senseless pummeling of common decency? Who in their right mind experiences this aural-assault and then says, “Yes. This is exactly what our users want.” I’d like to know, because a site that runs these ads has got to hate its users. It wants to embarrass them while they’re at work or in class. It wants to puncture their eardrums and scare them into the hospital. I defy you to name anything even remotely redeeming about these ads. And if anyone has actually ever received a free iPhone from one of them, well drop a line in the comments and I guess I’ll have to eat crow.