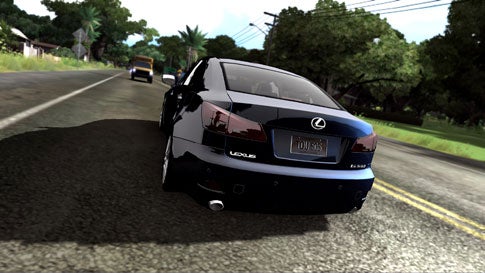 Yesterday, luxury carmaker Lexus announced that it has partnered with Atari to offer a downloadable “Lexus Car Pack” for the Xbox 360 video game Test Drive Unlimited, a race simulator set in the beautifully rendered island of Oahu, with more than 1,000 miles of actual roads. The first offerings include the new Lexus GS450h hybrid luxury sedan and the LS 460 premium luxury sedan-their flagship ride.

Now, I love the crossover here, but I’m dying to know what, precisely, they were thinking. After all, how many affluent, 45-to-65-year-old men who routinely purchase high-end luxury sedans that run in the very high five figures sit around playing video games on their Xboxes, especially Test Drive Unlimited. When you play the game, you have to make yourself a little hipster avatar by picking out edgy haircuts, skate-rat wardrobes, and gnarly goatees-I don’t think middle-aged, gray-haired and pudgy is on the menu there, nor are there sweater vests in the virtual closet. I suppose Lexus is hoping that their target market has teenage sons who play these games on the 52-inch LCD s in their living rooms and can sit there for an hour helping their old dads struggle with the wireless controller to test drive a Lexus.

Anyway, being squarely in the middle between young hipster and old geezer, I happen to have both an Xbox and a fondness for nice, luxury cars. So I go to Xbox Live and download the expansion pack with the two new cars. I open the game and quickly discover that I have to actually go to the dealership, on the north coast of Oahu, and buy the cars with the money I’ve accumulated so far in the game. Luckily, I’ve got about $150,000 in my virtual bank account-acquired after winning a bunch of challenges and street races-so I can at least afford the cars. But while you can usually just instantly zap yourself to any location on the island, I discover that you can only do that if you’ve actually driven to that place already. I’ve never been to the north shore of Oahu in Test Drive-in fact, it’s 45.7 miles away from where my car, currently a Mercedes AMG roadster, happens to be. So you know what that means? It means that I have to spend the next 45 minutes of my real life driving 45.7 miles across Oahu. In a video game. To test-drive a virtual Lexus. This is what my life has come to.

So I sigh deeply and begin my long, lonely drive to the dealership by jamming the gas down and roaring up to about 150 mph. At that utterly reckless speed, I struggle mightily to stay on the pavement through all the scenic, twisty Hawaiian roads. (It was a nice drive, actually-I have high-def.) I smash frequently into oncoming traffic and often fly wildly off the roadway. Fortunately, the car is programmed to not pick up any damage along the way, so I’m okay. But with the heavy traffic, limited access to open freeways, and all my spectacular wipeouts, it still takes time to get there.

A few minutes into my haul, I suddenly hear what sounds like some 12-year-old kid cussing at me. Seems that if you have your online account activated, Test Drive automatically drops you on the island with other online players. I have no idea who this kid was, where on earth he actually lived, or why he was yelling. I had to pull over and stop anyway so that I-that is, the real me-could go to the bathroom and grab a bite to eat. When I came back, the little rat had finally shut up. His mommy probably made him. I’m a grown-up, kid-I could play this stupid thing all night long if I wanted to.

With help from the game’s GPS navigation, I finally make it to the Lexus dealership. When I start to go in, a little red message flashes up saying I´m wanted by the police. Evidently, the Honolulu cops weren’t amused by my technique on the way to the Lexus dealership, and I now owe a fine of $223,000. Since I don’t have enough money, I have to go to jail. Nice. Didn’t even know that could happen. When I get out 30 seconds later, I have zero cash. So in order to buy my shiny new Lexus, I have to sell my entire inventory of cars, the Mercedes, a sweet little Volkswagen R32 and an Audi TT. Poof -gone!

I buy the LS 460 with the meager cash I get for the three cars-damned depreciation-because that’s the one I’ve actually driven in real life. The virtual hottie sales gal hands me the keys, and I drive off.

I have to admit, it was actually sort of worth it-that Lexus is a fine car! Having driven the real one on real roads, I can say that the virtual model pretty closely matches the real deal-even down to the luxuriously muffled interior, which you can experience if you cycle the camera view around to the behind-the-wheel perspective. You can check out the fully rendered interior-the plush leather, the GPS, which actually shows the accurately moving map, the dash instruments-and as best as I can tell, the driving dynamics of the front-engine, rear-wheel-drive 340hp boat are spot-on. I toss it around the Hawaiian back roads with abandon.

This brings me to my final quibble: I´m not sure if testing new cars in a video game is such a great idea from the dealer perspective-I was able to find out all kinds of really interesting things about this car that I wouldn´t have in a real test drive. For instance, if you crest a curving dipsy-do at 137 mph and go airborne and then skitter off the road and into the trees, the Lexus does very little to help you recover. My AMG Mercedes, on the other hand, handles it like a champ. So, you know, even though Lexus led this particular collaboration, I might have been sold on another car brand. Who knew video games might lead to honesty in advertising? Thanks, Lexus!