Is Multi-Millionfold Speedup Proof That Google Is Really Quantum Computing? 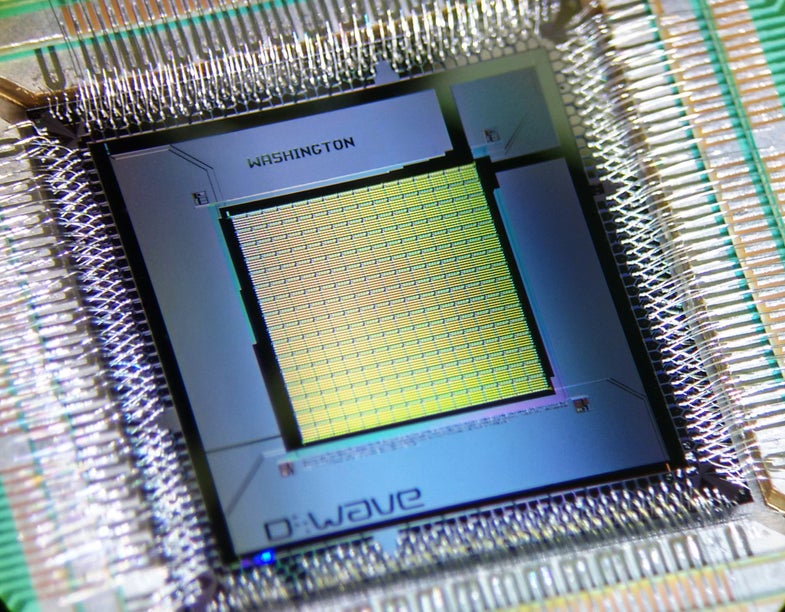 This week, Google announced a breakthrough that could prove its quantum computer is actually using quantum mechanics. When researchers gave the D-Wave 2X a carefully crafted test problem, the 1,000-qubit computer solved it 100,000,000 times faster than a classical computer could.

Quite a few tech giants and government organizations are investing in quantum computing. And many of them, including Google, NASA, and Lockheed Martin, are working with the commercial quantum computers built by D-Wave. The idea is that these devices can harness the counterintuitive effects of quantum mechanics to solve problems faster than conventional computers, which could potentially improve artificial intelligence, materials science, space exploration, and even Google web searches. (Skeptics, however, have suggested these practical applications are far-fetched and that quantum computing would most likely be applied to a less glamorous business: proving the theories of quantum mechanics.)

No matter how we plan to use quantum computers, we have to jump a big hurdle first: proving that a computer is actually using quantum mechanics to solve a problem. One sign of QC in action is quantum speedup—and that’s just what a team of Google researchers has discovered [disclosure: one of the researchers is friends with this author]. In their paper, released on the arXiv pre-print server, they designed a problem that a real quantum machine should be able to solve more effectively than a classical one. Then they posed this problem both to their D-Wave 2X and to a classical single-core computer. The D-Wave 2X was significantly speedier than the classical machine, and 100 million times faster than a classical computer running an algorithm that mimics quantum computing.

So Google has proved their quantum computer is really a quantum computer…right? The D-Wave 2X certainly seems to be using quantum effects. But the problem it solved was designed to be easy for a machine like the D-Wave and difficult for the algorithm it was competing against. It’s as if you tested the intelligence of a physicist by having her compete with a literary critic to solve a complex math problem: The scientist may ace that specific test, but it doesn’t prove she’s smarter than the critic overall—and it doesn’t prove that she would beat a mathematician in the same competition. If the researchers had chosen a different problem, or if they had compared the D-Wave 2X to a different algorithm, the quantum machine may not have been quite so impressive.

Ultimately, extraordinary claims will require extraordinary proof. To win over critics, D-Wave computers will have to demonstrate quantum behavior over and over again. In the process, researchers will learn how to improve these devices so they have more computing power and commit fewer errors. And that’s a big win for everyone.