I Have Detected a Ghost with Science

This being the time of year for ghosts, I decided to install a piece of software designed to detect when... 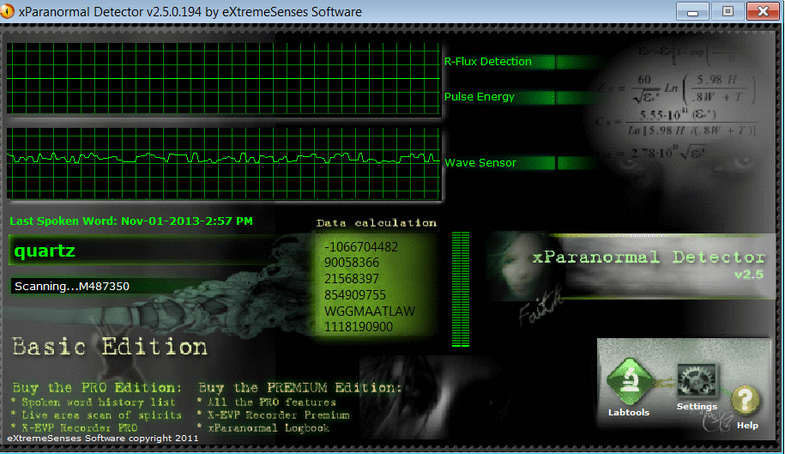 This being the time of year for ghosts, I decided to install a piece of software designed to detect when spirits may be, unbeknownst to me, spying on my Internet habits. I’m not sure who would be interested, exactly – personally I can’t think of anything worse than watching over someone’s shoulder as they play Bejeweled over and over again and switching to an Excel spreadsheet whenever a coworker walks by. But hey, there are all kinds of weirdos in the world and it stands to reason that some of them have died and are now cursed to wander the Earth doing boring things.

In the past decade, ghost-detecting has become a science in much the same way that I became Wolverine for Halloween festivities last night: possessing the ornamentation, if not the essence of the thing. Spirit hunters now come armed with an array of impressive devices, like EMF detectors, since, like pretty much everything else in our modern society, ghosts apparently emit low-level electromagnetic radiation. And now, ghost-ologists also have apps for their iPhones and laptops. There are so many apps available, in fact, that you will find it shocking that as of this writing not one has actually found any evidence of a ghost.

Undeterred by the statistics, I downloaded the xParanormal Detector v2.5, which “employs your existing computer hardware to measure abnormal changes and detect vibrations, images, energy to help any spirits to communicate with you.” It has impressive graphs with squiggly lines scrolling across them, and I watch them tentatively to see if any dead people want to make their presence known via the “R-Flux” detector or the “Wave Sensor.” Nothing happened after ten minutes, so I picked up my laptop and shook it violently. Neither line showed any change. I wondered what vibrations they may be picking up if they can’t pick up a violent shake. I was losing confidence, which was especially distressing considering that I began with zero confidence. I was now at negative confidence.

While waiting for something to happen, I tried to better understand what was happening. Arthur C. Clarke quite famously opined that “any sufficiently advanced technology is indistinguishable from magic,” and accordingly I place computers and all other electronic equipment into the “magic” category. Because of my ignorance, I needed to Google “R-Flux” to figure out if that’s even a thing. My search lead me back to the xParanormal Detector website, which explained that “R-Flux” means “rapid single flux quantum.” They helpfully linked to the Wikipedia page, which explained that RSFQ is a technology that is not used by everyday computers, in part because you need a cryogenic (very very low temperature) environment for it to work.

Just as I figured that out, the xParanormal Detector detected something! I felt a tingle go up my spine, as wind howled outside my window and my weird possible-meth-dealer-neighbor yelled something indistinguishable at cars passing by on the street. The R-Flux line jumped and a pop-up window helpfully informed me that a spirit spoke a word: “quartz.” This is the one other interesting feature of the Detector: not only can it use a technology that does not exist in your computer, but it can also translate ghost language. A dead person quite desperately wanted me to know that “quartz.”

I looked around to figure out what the ghost may be getting at. Nothing on the web pages I was reading referred to quartz. I wasn’t shopping for gems. I was drinking a root beer on the couch, and my cats were playfully wrestling on the floor in front of me. That’s when I realized: the spirit must have been trying to say “cats” but the software couldn’t quite understand it, or perhaps the spirit had a strange accent or something.

“What about the cats?” I asked the empty living room. The cats stopped playing and stared at me. Clearly they were also sensing a strange presence in the room, or perhaps they thought I had finally gone insane and were hoping I’d open all the cans of tuna at once.

It has now been fifteen minutes, and the spirit has yet to reply. The quartz are asleep. The wind is still howling outside my window but my neighbor is quiet. I’ve stopped shaking my laptop because I’m told that may not be good for it. I only hope that the ghost, by whispering that single word, has now found the closure it needs to move on from this earthly realm, because I’m going to uninstall the xParanormal Detector as it’s probably just a virus or something.