Say Hello To Mobile Ubuntu, Coming To An Android Phone Near You

A brand-new operating system for your previously-Android device! 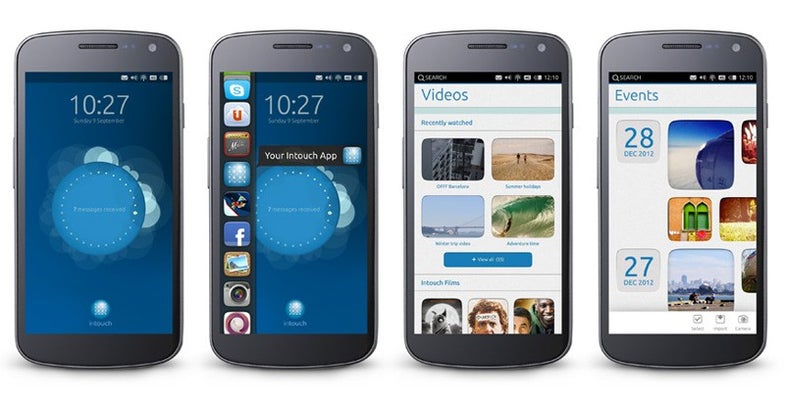 It’s not every day that we see a new mobile OS, even if it’s not entirely new. Canonical, makers of Ubuntu, the largest distro of Linux, showed off a very-nearly-finished build of the Ubuntu mobile OS yesterday, and it actually looks pretty good!

So you can install Ubuntu on most Android devices–it’s not an Android skin, it’s a completely new OS, but since it’s built on Linux, the same way Android is, Canonical says it’ll be no problem to install on modern Android phones. They’ve been demonstrating it on a Galaxy Nexus. There may be native Ubuntu hardware in 2014, but nothing’s been announced, so let’s treat this as an alternate OS for Android devices for now.

The OS completely tosses out any permanent buttons, be they Home, Back, or anything else, in favor of a gesture-based system. You trigger different functions by swiping in from the sides or top of the screen, a bit like on Windows 8 (or on WebOS, if you go back a few years). Swipe in from the left and you’ll get a sort of dock showing your most frequently used apps, while swiping in from the right cycles through recently used apps to function as an app switcher. Swipe down from the top to access messages and change settings. That last seems like a great idea, a bit like Android’s notification shade but with even more options, since you can move left and right to access other menus. (Swipe down on the messages icon to see messages, but then move right to see connection options, move further right to see screen options, that kind of thing.) Swiping up from the bottom within an app gives you more options, like the Menu button in Android.

The app situation is a little up in the air; it’ll have icons leading to both web apps and native apps. The latter is preferable, as it relies more on the power of the phone than on the speed of wireless connection, and can take greater advantage of the phone’s hardware. Eventually there’ll be some kind of app market.

Interestingly, this is a full version of Ubuntu, so there’ll be a way to dock the phone so you can use Ubuntu with a monitor, keyboard, and mouse, just like you would a computer. That had been tried before by Motorola, with not very good results, but the Motorola version gave a glorified web browser and Ubuntu’s is a full operating system, so hopefully it’ll work a bit better.

Engadget says Ubuntu for the Galaxy Nexus “will be available for download within the next few weeks.”