Yesterday evening, Microsoft gave us our first glimpse at the next version of Windows. The world’s most popular operating system... 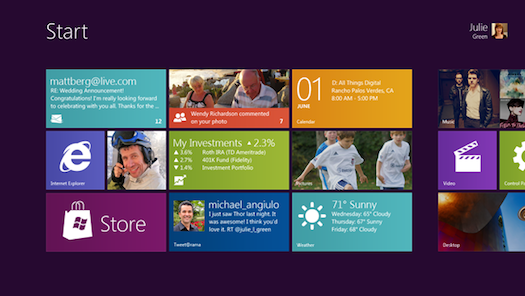 Yesterday evening, Microsoft gave us our first glimpse at the next version of Windows. The world’s most popular operating system is due for its biggest overhaul in decades. Designed as a one-size-fits-all OS, Microsoft wants Windows 8 to be used in both tablets and desktops–and rather than split the difference, they simply added a new, Windows-Phone-7-like tablet interface right next to the traditional keyboard and mouse interface.

Windows 8, which is currently just a codename, is a split-brain operating system. It’ll run two totally different kinds of apps: the traditional Windows software, looking (at least at this stage) pretty much like Windows 7, and a touch-focused tablet-like interface that’s in the vein of the angular, aggressively 2-D, thoroughly modern, and quite beautiful Windows Phone 7 smartphone OS. The whole shebang is designed to be used with touch–it’ll have keyboard and mouse support, but that’s really only for what will soon be legacy Windows apps. It’d be like having your MacBook run iOS, just like your iPad–except when you need to run Mac OS X apps, at which point it turns into a typical desktop. It seems a bit disjointed, for sure, but we’ll say this: The tablet-like part looks fantastic.

Left out of the tablet game while Apple, Google, and BlackBerry (BlackBerry!) runs ahead, Windows 8 is Microsoft’s plea for tablet attention. It looks mostly like an expanded, more powerful version of Windows Phone 7 (which you can read more about here): The homescreen is made up of tiles, which are somewhere in between icons and widgets in that they display some information while still acting like a shortcut to the full app. Everything is in bright colors with sharp angles, and the OS is heavily text-based, rather than image-based.

To get around, you can swipe from the right, which brings up your taskbar, loaded with the Start button, search, and settings. Swiping from the left lets you switch through apps, like an Alt-Tab command, but it’ll also let you snap two apps onto the screen for multitasking–a Twitter app could run on the side while you work in a browser on the majority of the screen, and you can resize those two apps (or swap in different ones) at will.

Microsoft wants this OS to run on lower-powered machines like tablets, so it supports ARM-based processors (like those used in tablets) and is actually more efficient in terms of power usage than Windows 7. Hopefully that means long, tablet-like battery life, something current Windows tablets struggle with. We’ll be seeing more about Windows 8 (and eventually learning its real name) in the coming months. It’s definitely promising, though we’re not necessarily sold on the idea of having a desktop interface on our tablets and a tablet interface on our desktops–the idea of having one OS for all purposes sounds great, but we don’t yet know how Microsoft plans to merge the very different sides of Windows 8 into a coherent whole. These are essentially just interface mockups–Microsoft is playing around with how Windows 8 might look and behave, and everything is subject to change. But it is a unique strategy, and we’re definitely excited to see how it develops. Check out the video above for a closer look, and we’ll keep you updated as we find out more about Microsoft’s new hybrid OS project.