For four years, it borrowed inside a man's head. Now, researchers are learning how. 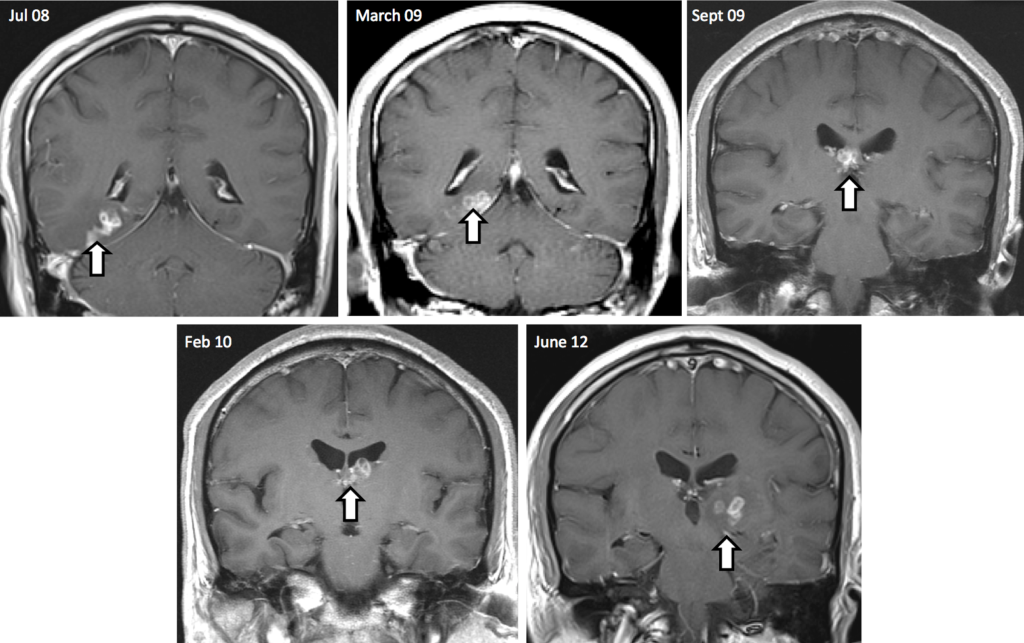 A Timeline Of Burrowing

In four years, the worm traveled 5 centimeters from the right side of the brain to the left, as shown by the cluster of lesions the larvae produced.

For many years, a Chinese man in the U.K. experienced a range of debilitating neurological symptoms with no understood origin — including headaches, memory loss, and seizures. Doctors conducted a biopsy on the patient, finding inflammation in the man’s brain, but they were unable to pinpoint the exact cause of his symptoms.

Then in one final biopsy, surgeons unearthed the source of the man’s neurological issues; they pulled out tapeworm that had been burrowing into the patient’s brain for the past four years. The 1-centimeter long parasite had travelled 5 centimeters from the right side of his brain to the left, before it was successfully removed through surgery. (Don’t worry, the patient is doing just fine now.)

Part of the removed worm was placed on a histology slide to confirm the man’s diagnosis – but then it was used for much more unique purpose. Researchers from the Wellcome Trust Sanger Institute successfully mapped the genome of this man’s particular tapeworm, revealing it to be an extremely rare species known as Spirometra erinaceieuropaei. It marked the first time this species of tapeworm had ever been sequenced, and researchers hope its genetic information will help clinicians better diagnose and treat this worm, plus others like, it in the future.

To feed, it absorbs fats through its skin. Fortunately for the worm, our brains are full of fatty acids on which to munch.

According to Dr. Hayley Bennett, lead researcher on the project, Spirometra erinaceieuropaei infection is seldom seen in humans. “Before 2003, there was only 300 cases reported in the literature, predominantly in China and Southeast Asia,” Bennett tells Popular Science. The parasite lives in water, and it’s believed that people become exposed by eating infected crustaceans or raw meat from amphibians and reptiles. It’s also possible that human infection occurs when people apply raw frog poultices to their eyes – a traditional Chinese remedy for eyesores.

In the human brain, Spirometra erinaceieuropaei causes sparganosis, or inflammation of the body’s tissues, which results in headaches and seizures. And to feed, it absorbs fats through its skin. Fortunately for the worm, our brains are full of fatty acids on which to munch. However, not much has been known about its overall biology and lifecycle.

When examining the tapeworm’s genome, the researchers found it to be much larger than expected. “It’s 1.26Gb long, which is almost comparative to the human genome,” says Bennett. “We don’t know why the genome is so large, but we looked for repetitive sequencing in the genome, and we found the repetitions make up quite a large percentage.” Spirometra erinaceieuropaei‘s genome is around 10 times larger than other tapeworms that have been sequenced, and it is filled with many genetic sequences that help it to break up proteins and easily invade its host.

More importantly, the research indicates that the tapeworm is resistant to albendazole, a widely used anti-tapeworm drug. Now with the genome mapped, researchers can pinpoint new drug targets in the worm that might be effective – both for Spirometra erinaceieuropaei and other tapeworms like it.

Bennett says this researcher highlights the need for the sequencing of more tapeworms, in order to create a global database of parasites and their genetic information. Such a database would go a long way in helping doctors to both identify and treat these parasitic pests, which prove to be a substantial problem across the globe.

“From a clinical perspective, tapeworms are a big problem all over the world. They are the largest cause of preventable epilepsy in developing countries,” says Bennett. “We hope the genome we produced will help people decide what kind of worm they get, but we’re just scratching the surface at the moment.”

The researchers published their work in Genome Biology.