A new book showcases images from the forgotten Gemini mission, which taught NASA how to live and work in space 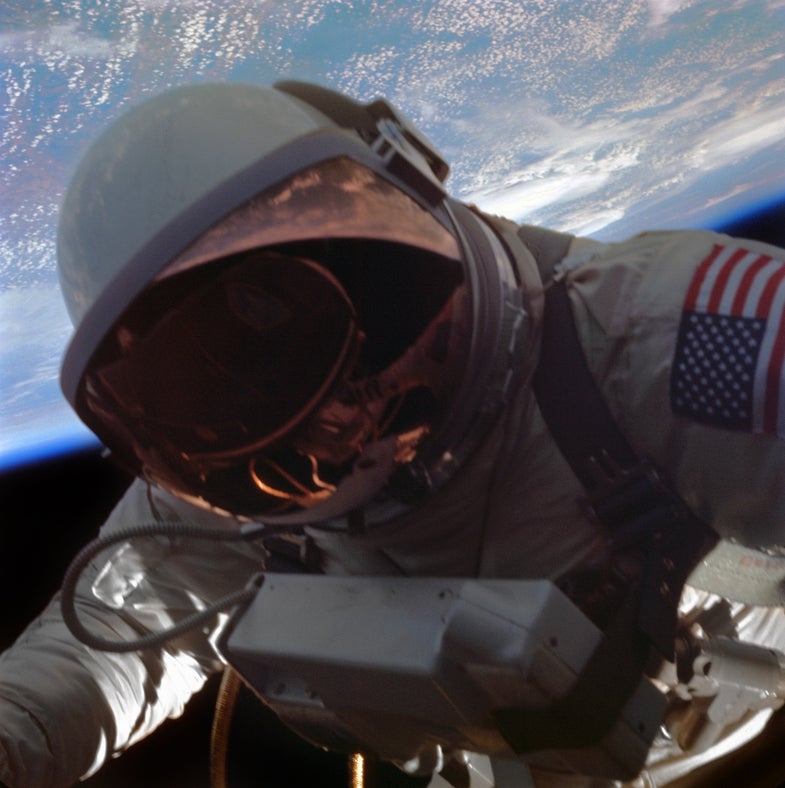 White’s helmet is equipped with a detachable visor assembly with two sep-arate over visors. The gold film-coated outer visor offers protection against visible sunlight (which is blinding when unfiltered by Earth’s atmosphere) and ultraviolet rays. An inner visor provides protection against micrometeoroids and heat. His chest pack contains an emergency oxygen supply and a ventilation control unit for cooling. The open hatch and its window are reflected in his visor. Bisney/Pickering/University of New Mexico Press
SHARE

When we think of historic spaceflight programs, we tend to think of Mercury, the first program to send American astronauts into orbit, and Apollo, the program that landed men on the Moon. We don’t often think about the Gemini program, the program that taught NASA to actually work and live in space. The program met the major goals of the Moon landing program: living in space for two weeks, rendezvous and docking, and debuted technologies like fuel cells and spacewalking. 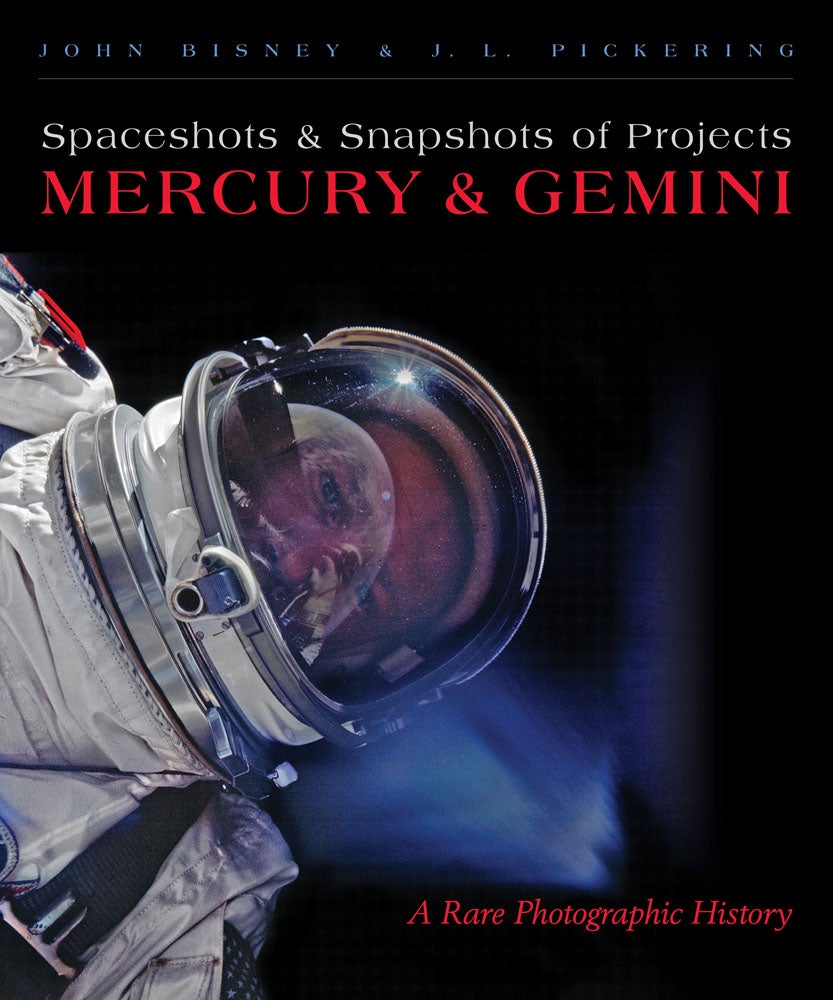 Spaceshots & Snapshots of Projects Mercury and Gemini is available now. 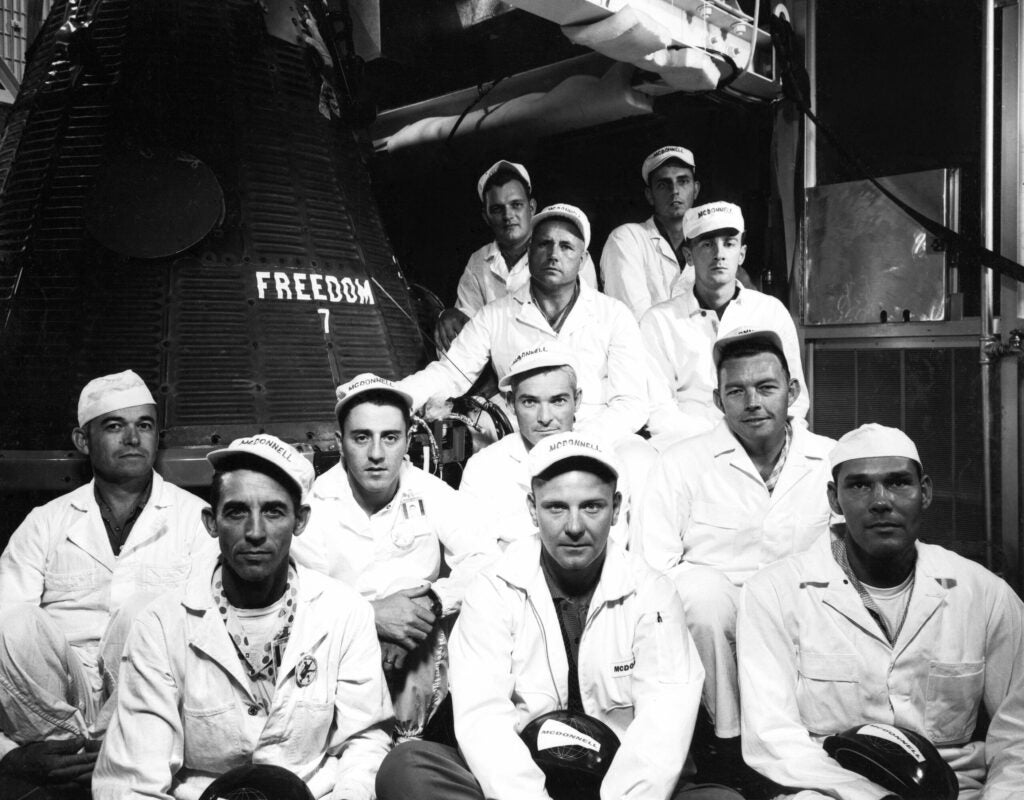 The second shift of McDonnell Aircraft workers pose with Freedom 7 in the white room at LC-5 on April 28, 1961. Ed Sieblist, assistant foreman, is first-row center. McDonnell won the Mercury spacecraft contract over the Grumman Corp. in 1959 largely because the federal government knew Grumman would have its hands full with a number of critical US Navy projects. 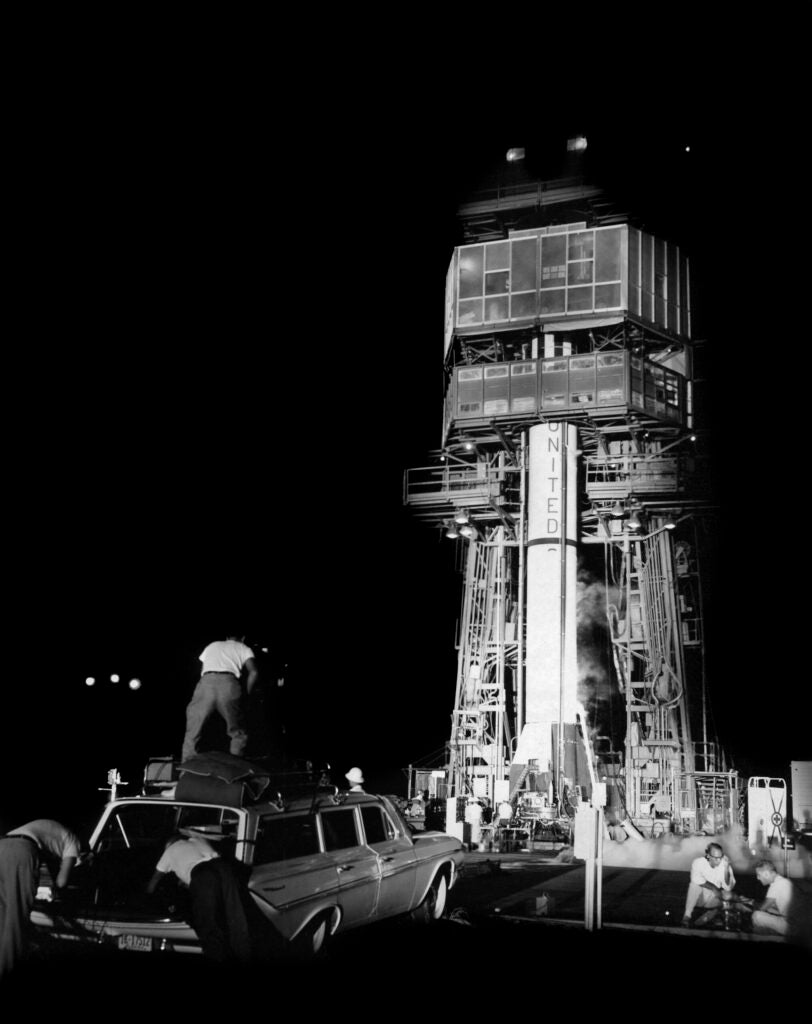 A television cameraman perched atop a Chevrolet station wagon provides TV network pool coverage at LC-5 early on July 19, 1961—the second launch attempt—which, like the first on July 16, was called off due to bad weather. 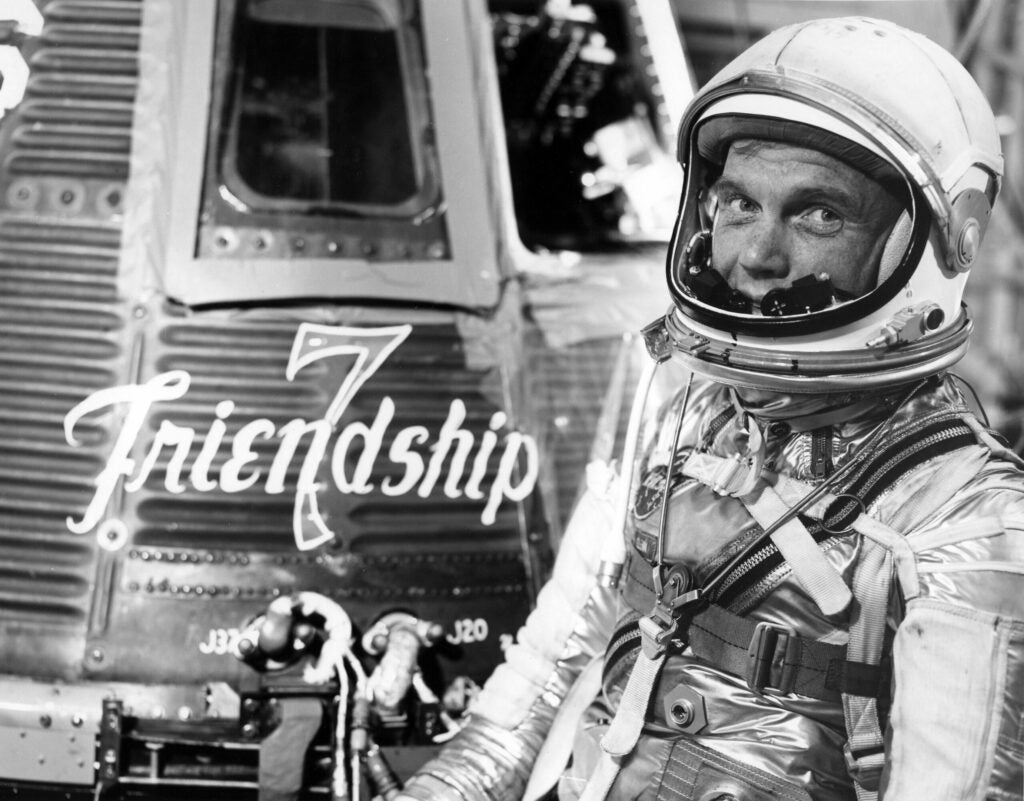 Glenn in the white room at LC-14 on January 20, 1962 (one month before the eventual launch). The “J” numbers on the spacecraft identified umbilical cable connections. 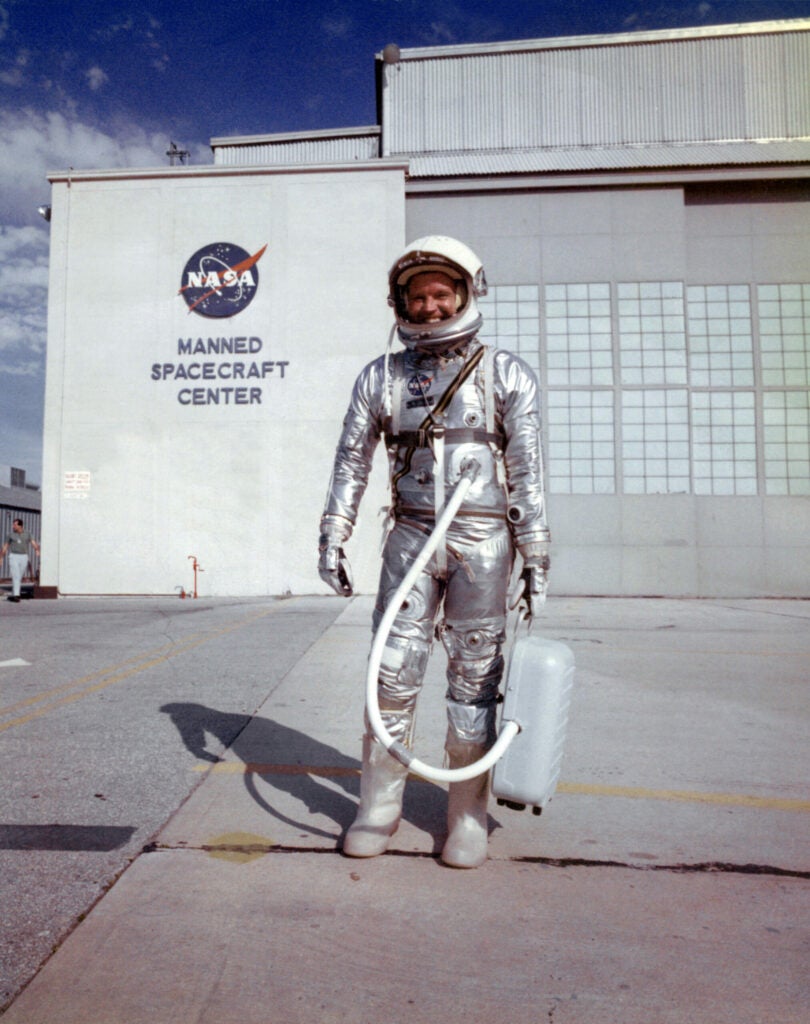 End of an Era

Cooper with his suit ventilator in front of Hangar S at Cape Canaveral. His Mark IV Goodrich suit incorporated many changes from Shepard’s suit, including boots, improved gloves, and new shoulderconstruction. 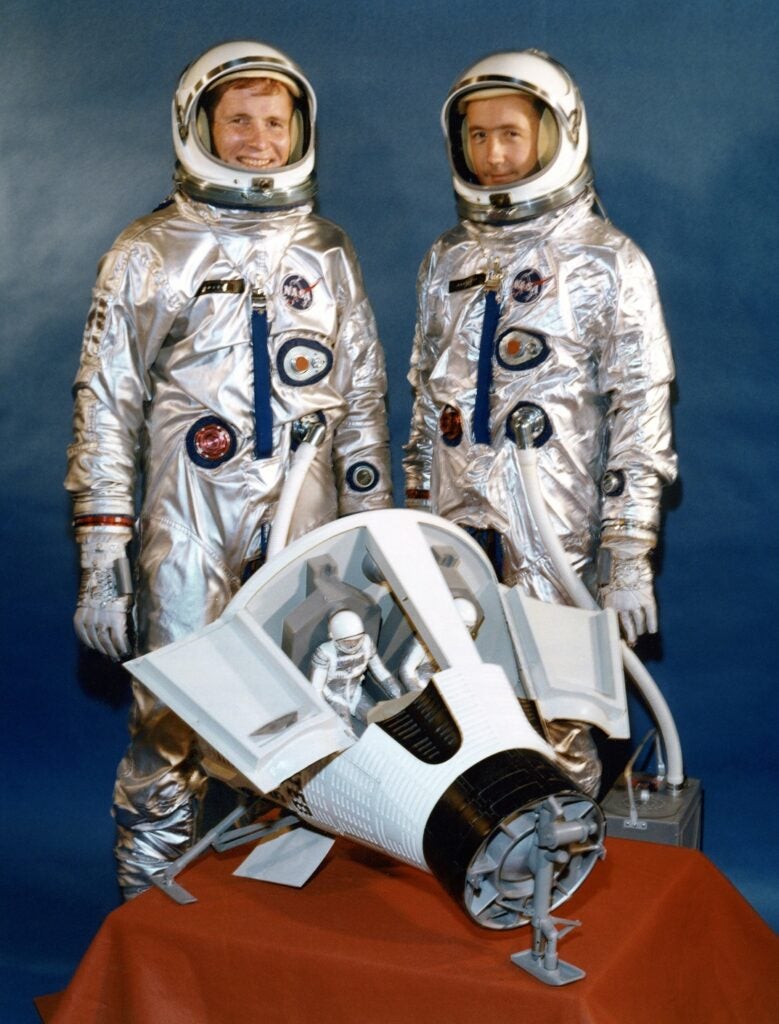 White and McDivitt on July 29, 1964—two days after they were named as the Gemini IV crew. McDivitt was chosen as command pilot over the six remaining Mercury astronauts (Glenn had resigned), as all but Cooper had medical issues at the time. The spacecraft model is shown in a proposed configuration—by then abandoned—to touch down on dry land using skids and an inflatable paraglider. For more on the paraglider, check out this old article on Vintage Space: http://amyshirateitel.com/2011/05/22/losing-rogallo-from-gemini/ 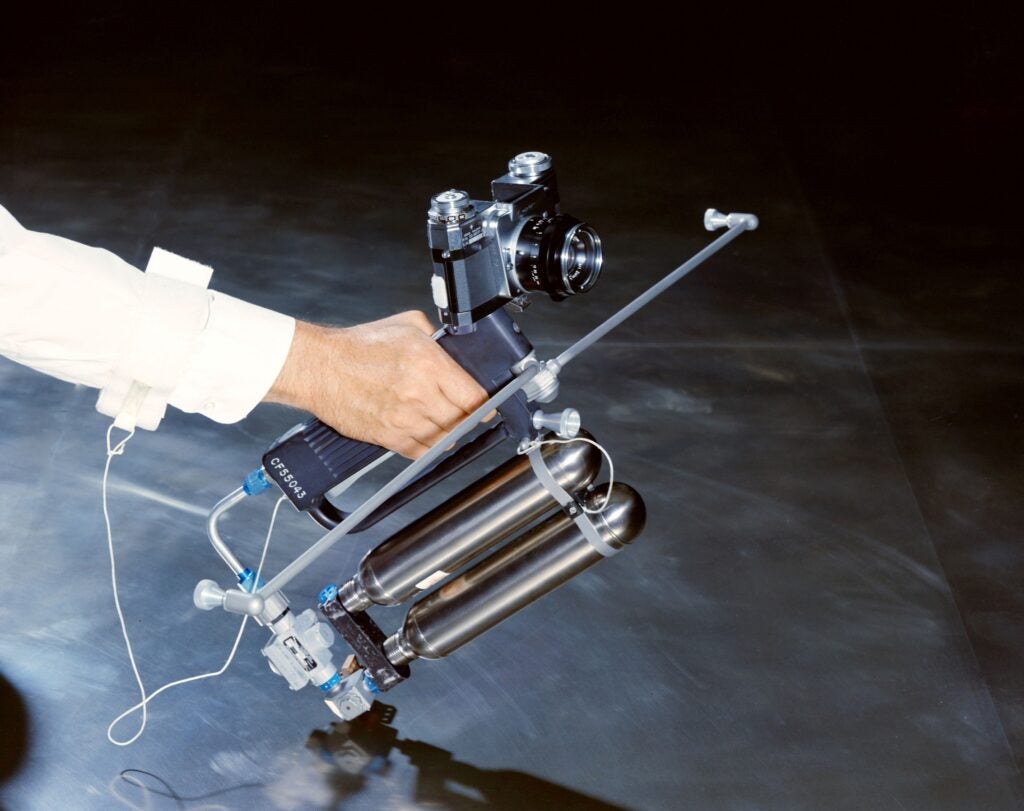 White’s Hand-Held Maneuvering Unit (HHMU) displayed with its wrist tether. Powered by compressed oxygen in the two bottles, one forward-facing jet and two rear-facing jets on the extensions allowed White to make small movements during his EVA. A Zeiss Ikon Contarex Special 35mm camera with a 50mm lens is mounted on the unit. 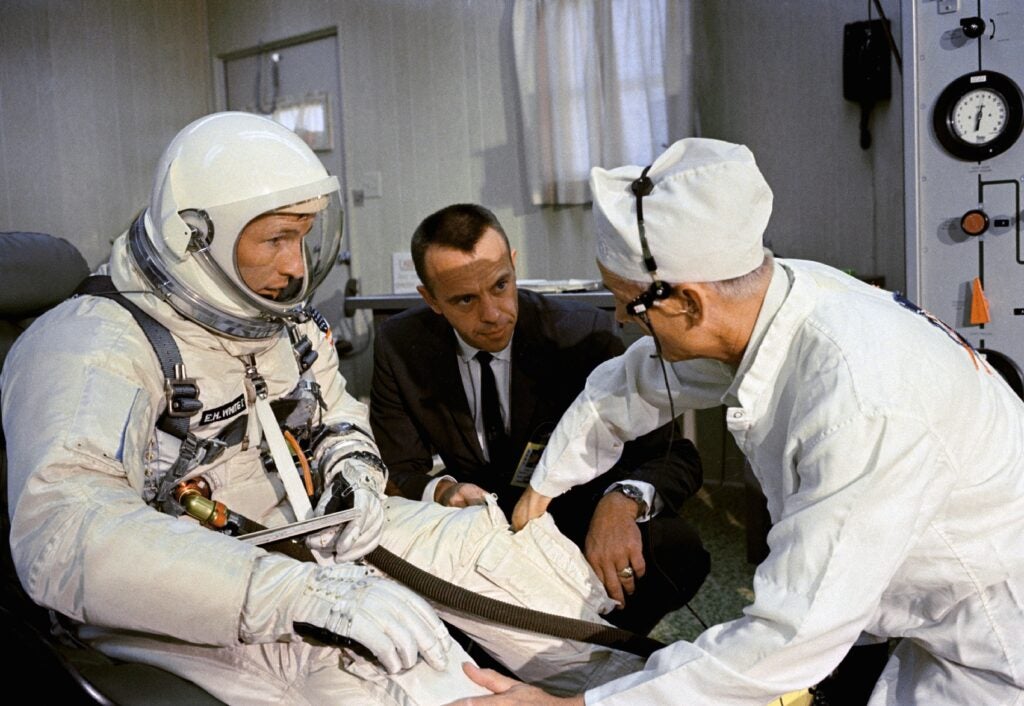 Suit tech Joe Schmitt reaches into a pocket on White’s pressure suit on launch morning in the suiting trailer at LC-16. Astronaut Office chief Alan Shepard (center) had been named to command Gemini 3 before an inner ear disorder took him off flight status in 1964. 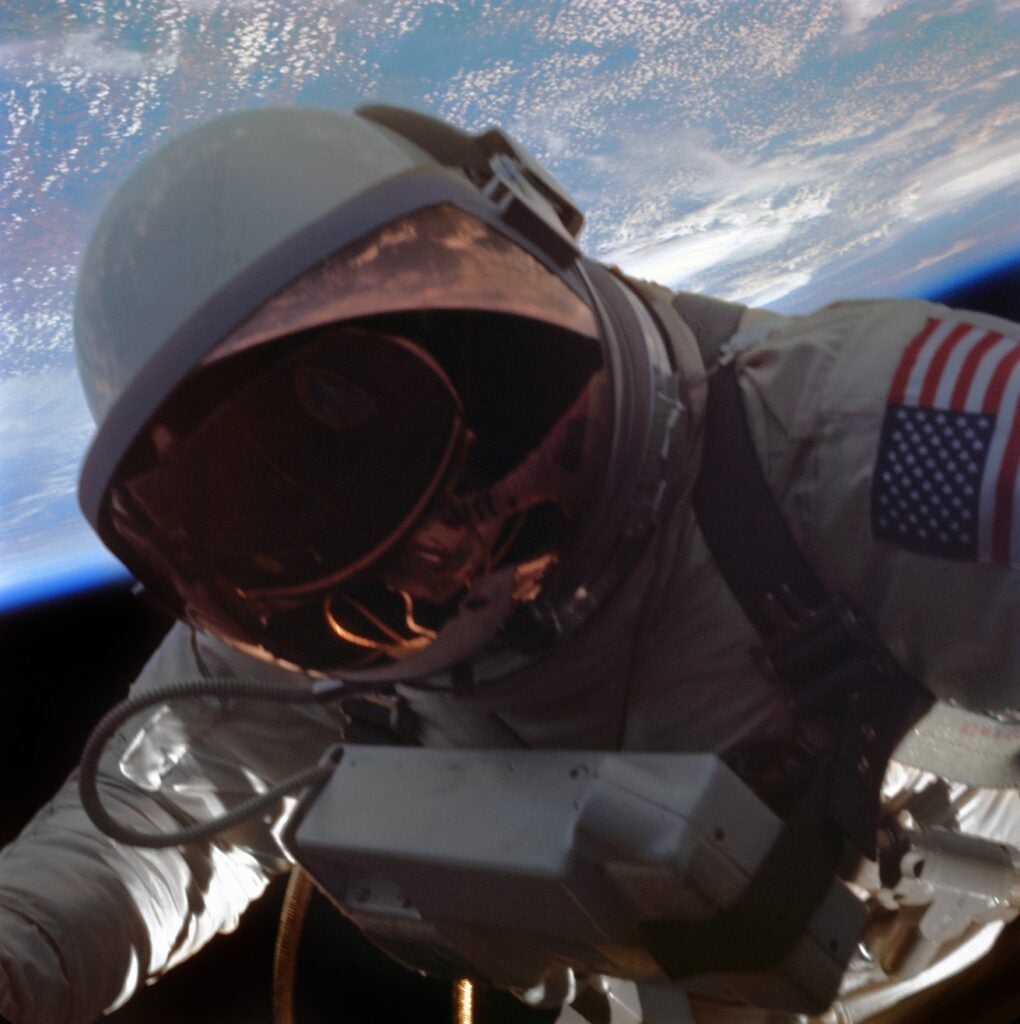 White’s helmet is equipped with a detachable visor assembly with two sep-arate over visors. The gold film-coated outer visor offers protection against visible sunlight (which is blinding when unfiltered by Earth’s atmosphere) and ultraviolet rays. An inner visor provides protection against micrometeoroids and heat. His chest pack contains an emergency oxygen supply and a ventilation control unit for cooling. The open hatch and its window are reflected in his visor. Pat McDivitt, right, briefly speaks with her husband at the flight director’s console in MOCR 2 as Pat White listens in on June 4. As the spacecraft passed over Texas, McDivitt told her husband their young children thought he was still in Cocoa Beach. It was the first time family members spoke with astronauts during a mission. 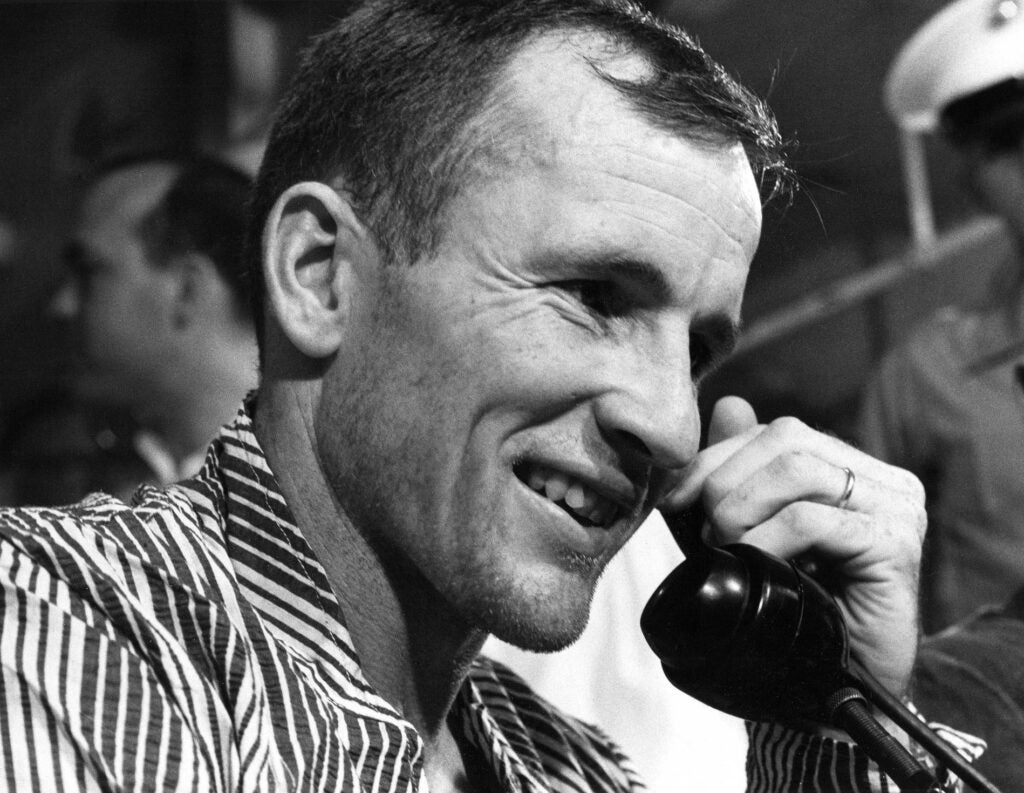 White speaks with President Lyndon Johnson just before 6 p.m. (EST) on the Wasp. Johnson called them from the Fish Room at the White House and invited them to visit him at his Texas ranch that weekend. With no razors aboard Gemini IV, the astronauts had not shaved in four days. 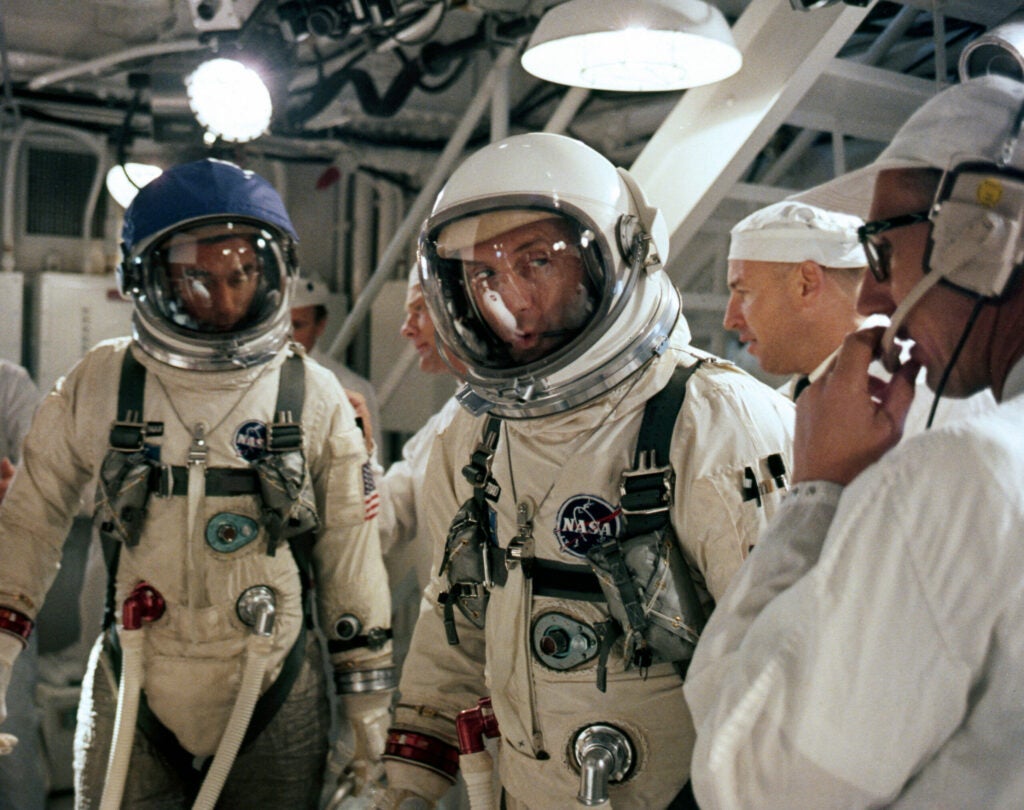 In the white room at LC-19, Cernan and Stafford prepare to enter Gemini IX-A on the morning of June 3, 1966: their launch day. Backup Pilot Aldrin is behind Stafford, with backup Command Pilot Lovell and McDonnell pad leader Guenter Wendt to the right. The legs of Cernan’s suit are covered with Chromel-R, a cloth woven from stainless steel fibers to protect the astronaut and suit from the hot exhaust thrusters of the AMU. A blue cover protects his EVA helmet visor. Beginning with this mission, Gemini helmets were made from multiple layers of epoxy-impregnated fiberglass cloth and visors were made of polycarbonate, providing far better impact protection than Plexiglas used previously. Each crewman has two gray life preservers on his parachute harness. 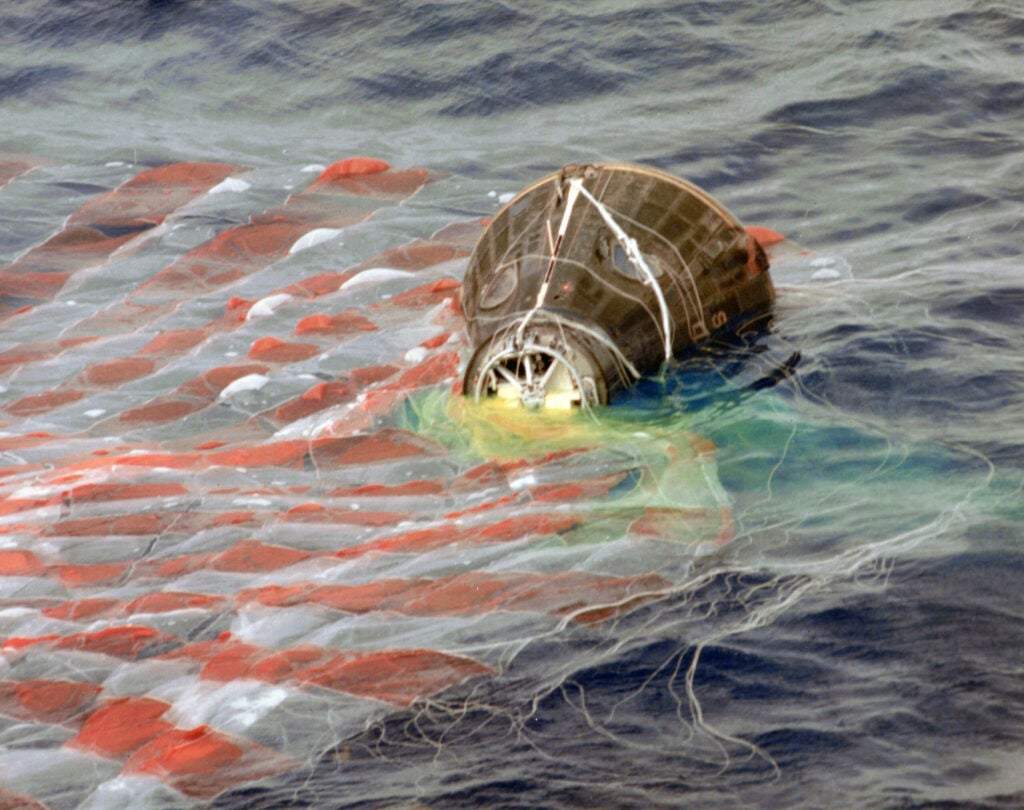 The spacecraft is covered with its bridle and parachute lines after the eighty-four-foot-diameter main chute settled around the spacecraft because of the lack of wind. 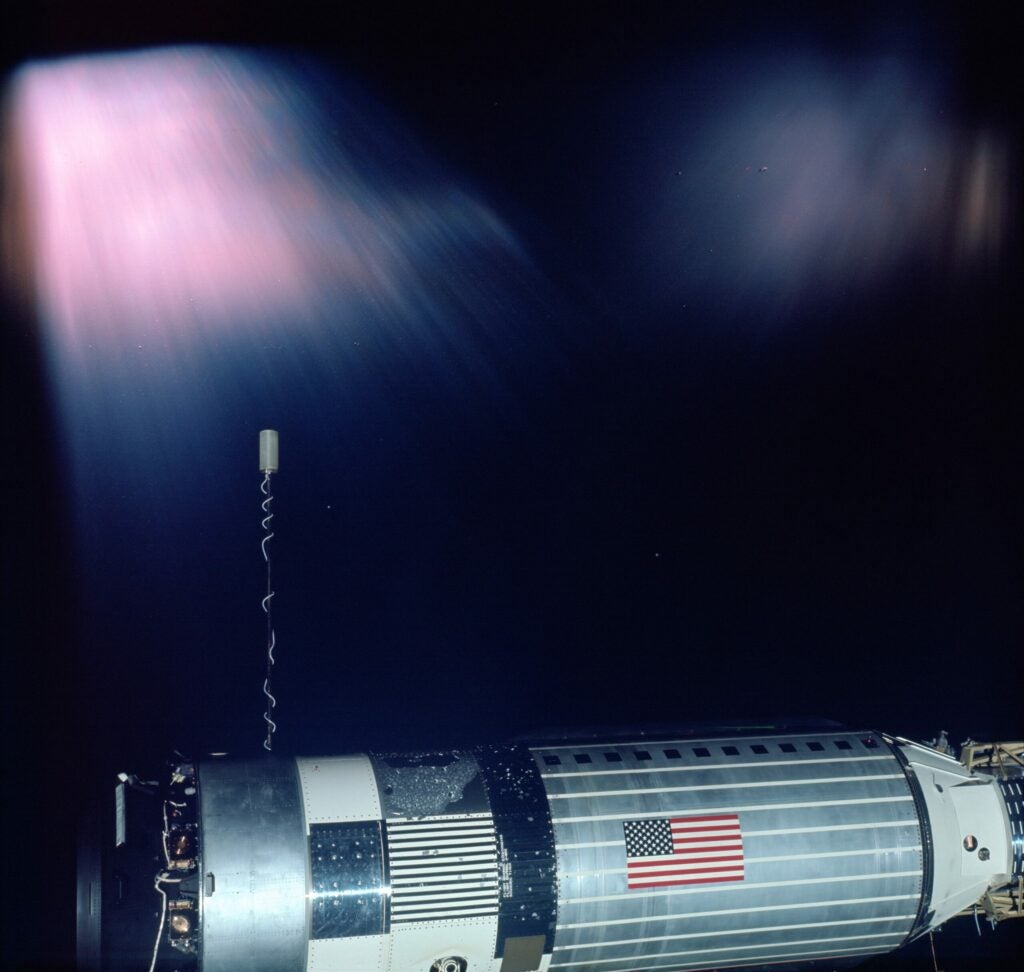 Gemini XI’s view of the ATV at a distance of twenty-five feet after the astronauts caught up with it over the California coast about an hour and twenty minutes after launch. The docking cone is to the far left and one of the ATV’s horizon sensors is at the bottom edge (center left). The crewmen (who’d been watching the ATV’s acquisition lights in darkness) donned sunglasses when it flashed into sunlight over the Pacific.
Space
history