Traeger's flagship pellet cooker is one of the best and most versatile grills available. 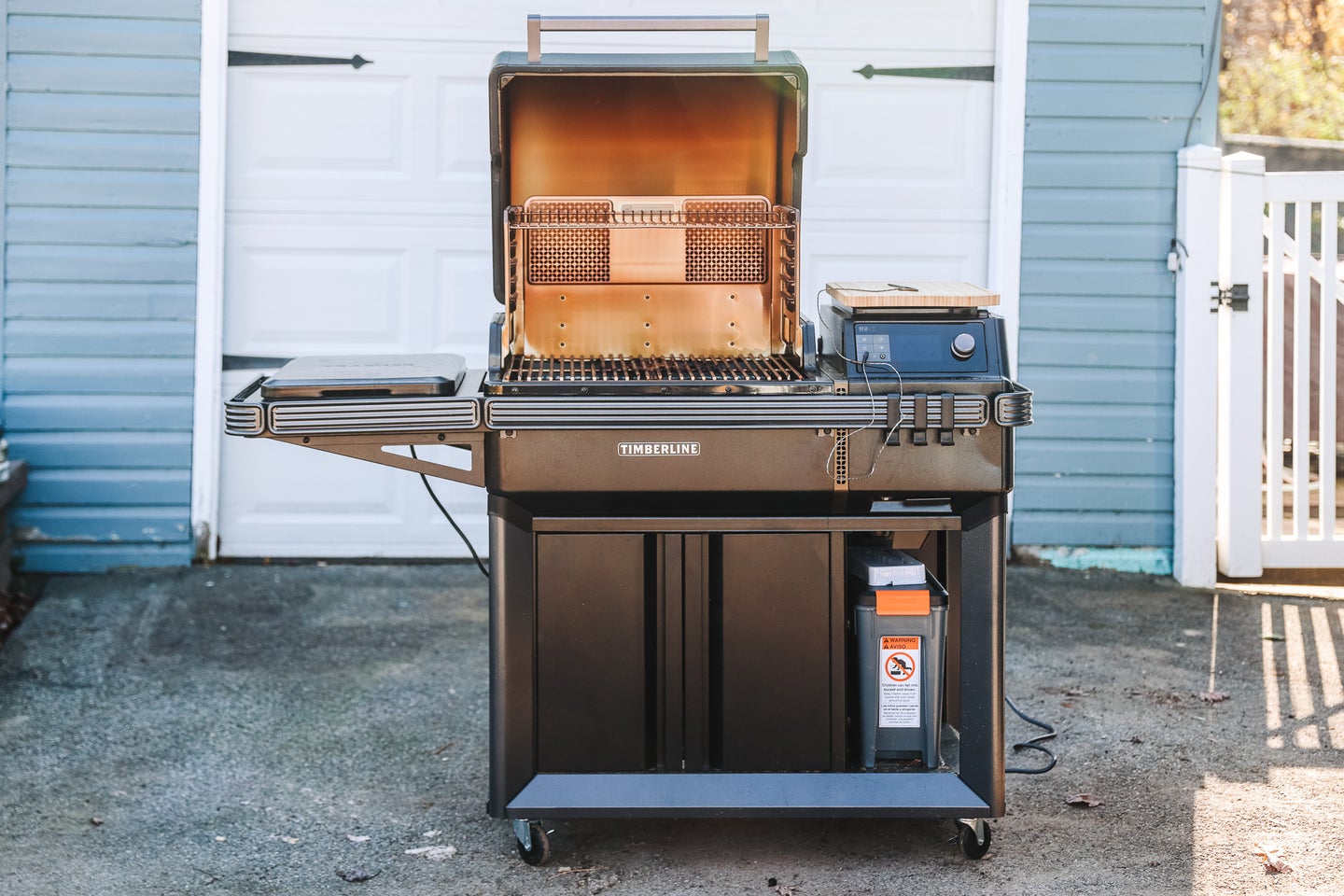 The Timberline takes up about as much space as a typical gas grill. Stan Horaczek
SHARE

I’m standing in my driveway at 11 p.m., bathed in smoke and illumination coming from under a grill’s sturdy lid. I saw a recipe for smoked apple crisp earlier in the evening and I couldn’t resist its call. Just a few hours—and roughly $18 worth of apples—later, my entire neighborhood smells as if I lit the largest, most intoxicating Yankee Candle ever created thanks to the Traeger Timberline and my hunger-induced fugue state.

Apple crisp isn’t typical fare for testing a smoker, but the Timberline—the company’s flagship pellet cooker—isn’t an average grill. It’s a high-end outdoor cooking machine with tons of features, bells, and whistles that aid in the cooking process without interfering with it. Once you get over the initial (and substantial) cost, it provides one of the most complete and enjoyable outdoor cooking experiences you’ll encounter. And, yes, it cooks the hell out of some meat, too.

What is the Traeger Timberline?

The Timberline is a $3,499 cooker that’s designed to handle everything from smoking, grilling, baking, and even searing. It offers the company’s highest-end finishes, as well as its most advanced technologies. This year’s Timberline model introduces a totally new connected control module, which introduces a touchscreen color display and a revamped user interface. It’s a connected grill so, while you can use it without the app or the included wireless Meater probes, you’ll be missing out on a chunk of the useful features available if you don’t introduce a smartphone to the mix.

The standard Timberline offers 880 square inches of cooking surface, which makes it about the size of a typical propane grill. It easily fits more than a dozen burgers on the main cooking rack and two auxiliary racks up above make extra room for vegetables or anything else you might want to bombard with smoke. The Timberline XL costs $3,799 and augments the total cooking area to 1,320 square inches. The upgrade is likely only worth the extra money and space if you do a ton of entertaining or you’re regularly smoking several big hunks of meat at the same time. Adding size extends warm-up times and requires more pellets for each cook, so it’s not simply a “bigger is better” situation for every use case.

As you’d expect with a flagship grill, everything here feels high-end. The double-wall stainless steel lid on the cooking chamber is heavy in the way you want it to feel heavy. It’s surrounded by burly gaskets that soften the sound it makes when it closes. The double doors on cabinets below the cooking chamber don’t chatter and clang when you open them. Traeger even added a bamboo cutting board on the lid of the pellet hopper, which I found surprisingly handy. Comparing it to a luxury automobile might be an obvious metaphor, but it’s also extremely apt.

A textured rail surrounds the front and sides of the grill. This is part of Traeger’s P.A.L. (short for Pop and Lock) accessory attachment system. It allows optional accessories like condiment containers, utensil hooks, and even a sturdy front shelf to quickly and easily attach to the grill. The rail provides a remarkably sturdy connection to the accessories and it made me dangerously curious about what other doodads I could buy from Traeger to attach to it. The P.A.L. system is one of those features I appreciated way more in practice than I did when I read the spec sheet.

Traeger also includes a side burner on the left side of the main cooking chamber. Because there’s no gas tank, Traeger included an electric induction burner, which is a first for this kind of cooker. Rather than relying on an open flame to get the pan hot, it uses induction, which means the burner itself stays cool to the touch and the pots and pans heat up due to electric current. The process is quicker and more efficient than it is with gas, but requires compatible cookware. So, you can’t just slap an old, crusty cast iron pan on and expect it to work.

Setting up the Traeger Timberline grill

Traeger has put a ton of work into its branding, packaging, and overall user experience. That effort really pays off during the assembly process. From start to finish, it took my middle-school-aged son and I roughly 90 minutes to put the whole thing together at a casual pace. The kit includes all the necessary tools and a surprisingly sparse number of screws and bolts. It was mercifully simple.

Connecting the grill to your home Wi-Fi network and Traeger app proved simple as well (assuming your Wi-Fi is strong, so consider an extender if walls are blocking your signal). Traeger has streamlined that process and it felt a lot like setting up a high-end piece of electronics. I did run into a bit of trouble initially. The first time you actually pump pellets into the grill, it’s meant to run a 30-minute, 500-degree cycle to season the cooking chamber and the racks. For some reason, my grill topped out around 200 and wouldn’t go up from there. I canceled the seasoning process and went back to it later and it worked fine, but that was the only real hiccup I hit during setup.

Cooking on the Traeger Timberline

Built quality and Wi-Fi features don’t mean much on a grill like this if it can’t put a solid smoke ring in a pork shoulder. The main cooking chamber includes a primary cooking grate, as well as two secondary grates that sit above the main surface. During my testing period, I cooked everything from a whack of brisket burgers and sausages cooked at high heat to a low-and-slow picnic shoulder and pork belly burnt ends.

Regardless of the temperature you choose, the Timberline heats up quickly and efficiently. I started the grill before I started slathering mustard and rub on the pork shoulder and it had hit the 230-degree target I set for it by the time I was done. It stayed within 10 degrees during the entirety of the long cook, except when I opened the lid. That double-wall lid does an excellent job of maintaining temperature in the main cooking area. It’s considerably better than the older Traegers—such as the Ironwood 885—I’ve used in the past.

The Timberline comes with a pair of wired probes that connect to sockets on the front of the controller. They work as you’d expect, but the grill also comes with a pair of Meater wireless thermometers that integrate with the controller and the Traeger app. I have always been a fan of Meater’s products, even before Traeger purchased the company. They work even better here thanks to the native integration. Just make sure you keep them charged before you cook.

The grill provides a calibration process for both the wired and wireless probes, but I didn’t go through it as they seem pretty close straight out of the box when compared to my typical instant-read thermometer.

As you might expect, the Traeger does a phenomenal job when it comes to meat. It’s the easiest thing to test on a grill like this and I pushed my Costco’s meat selection to its limits. Traeger offers a Super Smoke feature, which adds an extra dose of smokey taste to meat, but I prefer to use the standard cook. It’s quick and reliable and it does an overall excellent job, even with overnight cooks in changing humidity and temperature environments. That double-wall cooking chamber does what it promises.

Baking still feels slightly indulgent on the grill. I have a countertop convection oven that heats up extremely quickly and efficiently, which I still prefer. But, that smoked apple crisp did have a really unique (and frankly, awesome) taste that I’ll use more often.

Pellet grills promise an easy way to get food packed full of smoke taste and this absolutely delivered in every cook I threw at it.

I’m not an induction burner veteran, but I did get a few opportunities to try the built-in one on the Timberline. I cooked some bacon to go with burgers and seared off some steaks that I had put through the reverse sear process by slowly cooking them on the main grill first. The induction burner heats up very quickly, stays cool to the touch, and is very easy to clean because the surface is totally flat. I was surprised to find that I prefer it to a gas burner like I’ve used in the past.

The more you use the Timberline, the more little things you’ll find to like about it. The pellet level monitor now sits directly over the auger so it gives accurate readings about how much fuel you have left. The grill comes with a pellet storage container and you can easily empty the pellets out of the bottom of the hopper by simply opening a sliding door. That makes switching pellet types quick and very simple.

A pair of lights on the side of the hopper shine into the main cooking chamber. That’s great for night cooking, but they also double as a sensor to determine when the lid is open so it can get ready to stoke the fire and bring the grill back up to temperature after the heat escapes. This is the kind of detail you don’t get with a basic cooker.

One of the biggest improvements in the new Timberline shows up when it’s time to clean the grill. A fan now blows ash out of the burn pot and onto the slanted surface below the grates. Rather than reaching into the pot, you can simply scrape the ashes and the grease into a hole. It falls into a removable canister that’s very simple to empty and replace. Metal liners for the canister make it even easier to clean.

This cleaning system is a huge improvement over the old-style grills and even Traeger’s lower-end cookers. Cleaning out grease and ash can be enough to dissuade me from starting an outdoor cook, but that’s not the case here.

So, who should buy the Traeger Timberline?

At $3,500 (or $3,700 if you want to step up to the XL model), the Traeger Timberline is a serious investment but a worthwhile one for people who are going to use it very regularly. Traeger designed this grill as a total outdoor cooking solution, and it has really achieved that goal. If you plan to cook outside on the regular, it’s hard to find a better or more versatile cooker. Some purists will say that the extra features hinder the connection with the fire. I get where they’re coming from. I’ve cooked a pig over a cut-apart shopping card in a hole in the ground. And while that was fun, telling my phone to make me a perfect tray of pork belly burnt ends while I play Overwatch 2 is even better. I’ve embraced my status as a weirdo who grills up dessert in the middle of the night and the Traeger Timberline is right there with me.