Convection cooking and a companion app make the Traeger Ironwood 885 pellet grill ready for anything. 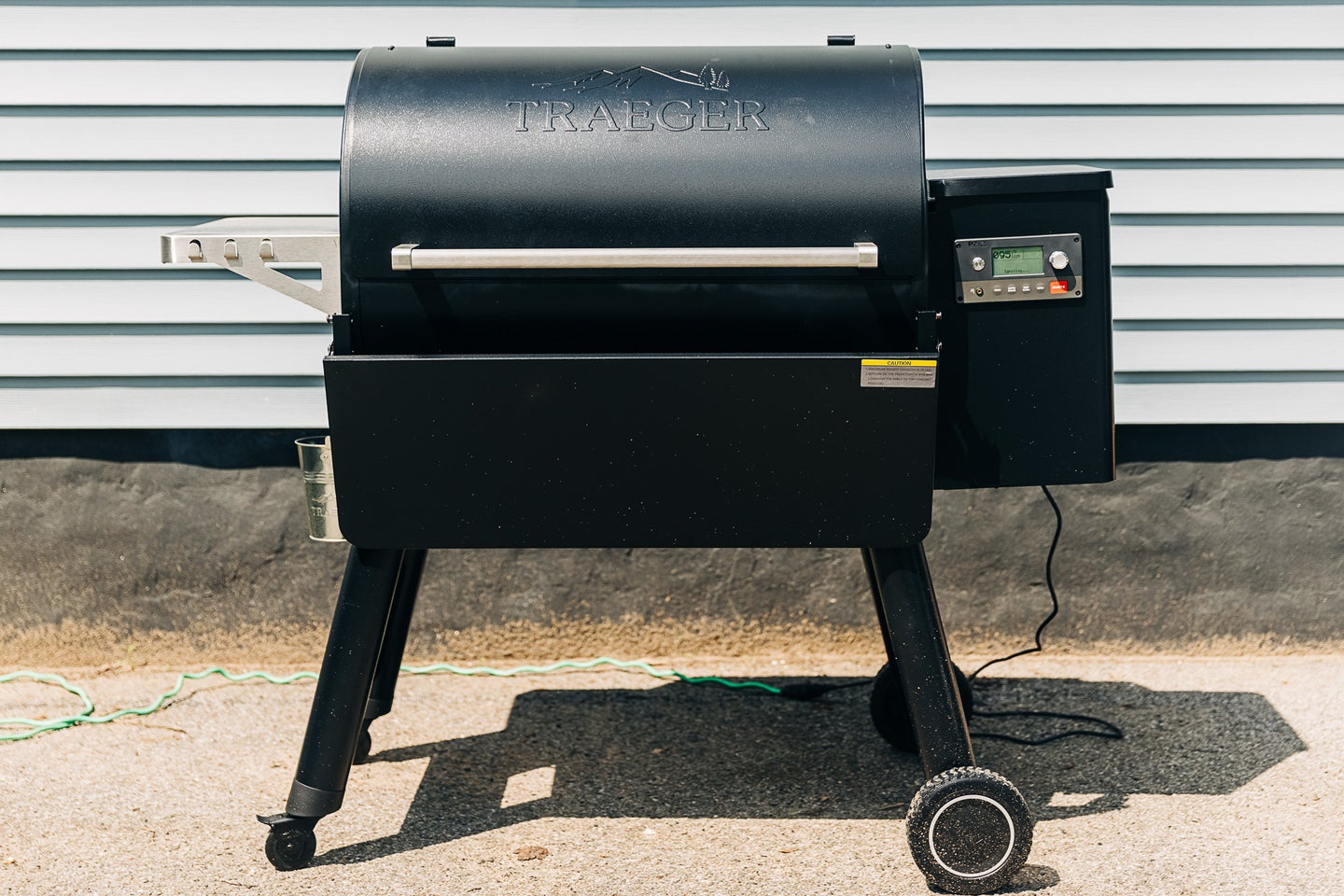 It’s hard to nail down exactly how much fancy technology belongs in a grill. Some cooks will tell you that no one needs more than an old oil drum, a sack of charcoal, and a disregard for the wellbeing of your arm hair. Others prefer propane grills with more knobs than a space shuttle. But it’s tricky. Go too basic and cooking becomes a chore. Make it too simple and you lose the “meat juice dripping into an open fire” vibe that’s missing from our lives. The Traeger Ironwood 885 pellet grill nails that balance.

What is the Traeger 885 Ironwood pellet grill?

Pellet grills work much like pellet stoves folks use to heat their homes. A screw-shaped auger pushes a steady stream of pressed wood pellets into a burning crucible, which fills the chamber with smoke and just the right amount of heat. A fan system directs airflow around the chamber to manage how much time the smoke spends around the food.

Traeger is the 800-pound gorilla in the pellet cooking space and the $1,500 Ironwood 885 offers its most universally appealing set of features.

As the name suggests, the Traeger Ironwood 885 has 885 square inches of total cooking area spread across its main grate (570 square inches) and upper rack (315 square inches). It’s a lot of room. I fit two racks of ribs on it with no problem. Traeger says you can fit ten full chickens in there. I couldn’t test that because my corporate expense account for “10 whole chickens and five pounds of potato salad,” got unceremoniously declined. But, I believe they would have fit.

If the 885 seems like overkill for your regular needs, Traeger grills offers a smaller 650 square inch version. It fits fewer chickens, but takes up less room in your garage and won’t require as many pellets to keep the chamber at temperature.

The Traeger Ironwood 885 arrives in an expectedly massive box. The grill itself weighs roughly 175 pounds, so assembly requires two people. The pieces come clearly labeled and neatly arranged with all the tools you need in the box, which is handy. It took two people roughly 30 minutes to get it out of the box and ready to start burning pellets.

Once it’s assembled, you still have to season the grill by filling the hopper with pellets, then cranking up the temperature over 500 degrees for a time before it’s ready for any food.

The grill itself feels high-end. The exterior steel surfaces are powder coated and the door has a good weight to it. The wheels are chunky and stable and the handles feel substantial. The tolerances weren’t exactly Ferrari-level accurate on our test model. The door closed a little crooked and the lid on the pellet hopper scraped a little against the main barrel right out of the box. It was all simple to adjust and understandable considering its journey through the freight shipping process.

Cooking with the Traeger Ironwood 885

The Traeger Ironwood 885 setup process includes pairing the grill to Traeger’s companion app, which works on both iOS and Android. You could use the grill without the app, but you’ll miss out on a lot of handy features. I could have done without some of the cutesy branding stuff in the process—it offers a number of tongue-in-cheek, meat-themed names for your new cooker—but the app is very well-designed and useful. That’s a small trade-off for my grill sporting a name like “meat cave.”

The Traeger D2 controller oversees the entire cooking process. Once you set your temperature, the auger starts pushing pellets into the fire pit and circulating air with a built-in fan. It took between 10 and 15 minutes for it to get up to 225 degrees. I find that it usually overshoots the target temperature a little and then comes back down, so rather than sitting and staring at the numbers on the display, I just let the app tell me when it’s ready. That’s one beautiful thing that comes with the tech.

I tried most of my familiar barbecue recipes, including picnic shoulder, ribs, and the barbecue champion (at least for my money), pork belly burnt ends. They all went swimmingly and, because of the connected nature of the grill, I didn’t have to babysit them during the cook.

It’s all about airflow

If you have an older Traeger smoker, it likely has a chimney sticking out of the top. The Traeger Ironwood 885, doesn’t have that adorable little smokestack. The internal fan creates a rolling vortex of air inside the chamber. Traeger calls this feature Tru Convection. It keeps the smoke-filled air circulating around the food on the grates before pushing it out through a channel on the back of the cooker.

You can enable the Super Smoke Mode, which manages air circulation at low temperatures (between roughly 170 and 225) to impart the highest level of smoke into your meat. First, I smoked picnic shoulders in both regular mode and Super Smoke. I did notice a difference, but whether you’ll find it an improvement or not will come down to personal taste. I preferred the typical cooking method, but your tongue may be different than mine.

The app allows you to monitor the grill’s overall temperature as well as the temperature from a meat probe that plugs into the controller. After roughly a dozen cooks, I never had trouble with the Traeger Ironwood 885 getting too far away from its target temp.

Of course, you lose heat when you open the door, but it always quickly shot back up to the correct setting. Consistency is key for low and slow cooks, and the Ironwood 885 does it well. The advanced controller helps, but the construction also plays a part. The double-wall steel cooking chamber helps, as does the tight-fitting, gasket-equipped lid.

Under the hood, Traeger equipped the Ironwood 885 with its first DC brushless motor to power the auger. Wimpier motors can get jammed up when the pellets clump together, but I didn’t experience any of that with this model.

While the low smoking temperatures often get most of the attention, you can take this grill all the way up to 500 degrees and use direct heat to sear meat if you’re feeling like a steak instead of a 12-hour brisket. I threw some steaks on it, as well as a couple of pre-made burgers (with a special brisket and bacon blend) and the Traeger handled all of it with aplomb.

The rest of the tech

Look around the Traeger Ironwood 885 and you’ll find other handy little features that make cooking simpler. The pellet hopper has a built-in light with a sensor that tells you how much fuel you have in nearly real-time. The hopper itself can just barely hold an entire bag of pellets, which means I won’t spill the leftovers on the garage floor when I’m looking for a place to store them. There’s even a convenient pellet chute on the hopper so you can empty it and swap out the kind of fuel you’re using without wasting it. That’s a lot easier than scooping it out because you want to use a sweeter wood with your pork.

Who should buy the Traeger Ironwood 885?

$1,500 is not a small amount of money to spend on a grill, but the Ironwood 885 really is an extremely versatile machine. Each bag of pellets will set you back roughly $19, but I got two full pork shoulder smokes out of a single bag and still had plenty leftover. That’s hours of heat.

You may take some heat from the barbecue “purists” out there who would rather cook over a hole they dug in the ground, but the Traeger Ironwood 885 is undeniably capable of churning out some top-tier grub.

There are times when it all feels a little extra. You can buy individual liners for your drip tray and your grease buckets, which make life easier and reduce wear on your grill. It’s easy to get spoiled. But, even if you feel a little guilt, it will almost certainly melt away when you smell the smoke and bike into a perfectly wiggly bit of pork covered in rendered fat and bark.