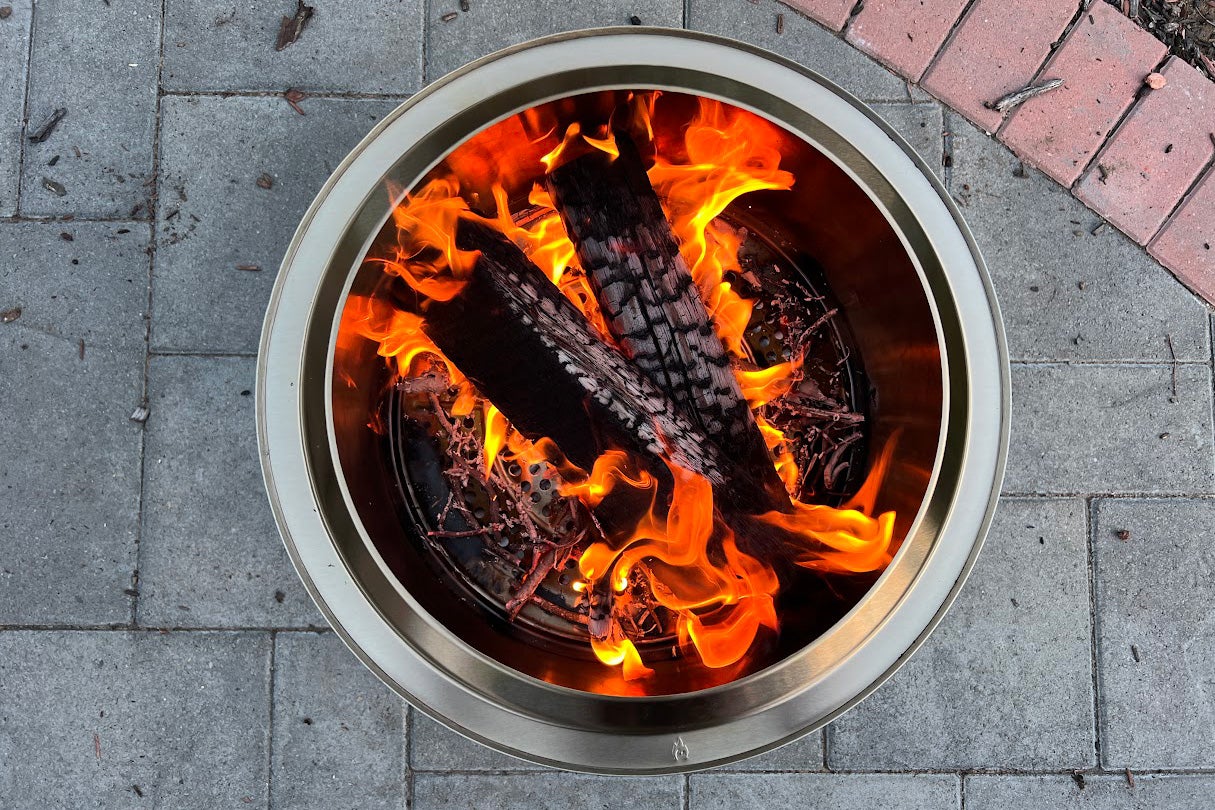 It's a very pretty thing when it's going. Stan Horaczek
SHARE

I suck at starting traditional campfires. I burn through all of my kindling but the big logs never catch. Next thing you know, I’m left with nothing but a small smolder and the crushing scorn of my increasingly chilly guests. The Solo Stove Bonfire 2.0 has largely fixed this issue. This decidedly sophisticated stainless steel fire pit does everything in its power to help get a fire going and keep it roaring for as long as possible. Its power comes from clever engineering, which manages airflow in such a way that it’s easy to start and all but eliminates smoke that would otherwise always find a way to blow in your face. While its relatively high price and decidedly un-primal nature may put off some pyro purists, this is easily the best fire pit I’ve ever used.

What is the Solo Stove Bonfire 2.0 fire pit?

Take the Solo Stove Bonfire 2.0 out of the box and you’ll find that it’s essentially just a stainless steel cylinder. With the collar around the top edge, it resembles a huge, squat soda can with a subtle Solo Stove logo embossed into the side. I also used the included Solo Stove Stand to slightly elevate the fire pit up off of my stone patio.

While the stove looks simple, its stainless walls contain some clever engineering and precise manufacturing. Holes in the bottom of the cylinder pull air into the chamber, through the walls, and out through another set of holes in the top. As long as you don’t block airflow into the main burn chamber, the air current feeds the fire plenty of oxygen to get it rip-roaring in no time. The direction of the airflow and location of the vents also all but eliminates smoke at just about every phase of the burn.

The Bonfire is the middle size in the Solo lineup. It measures 19.5 inches across, which I found accommodated typical split logs from the local garden store without much room to spare. If you cut bigger logs, you might want to go up to the larger Yukon model, which measures 27 inches across. The company also offers the 15-inch Ranger for smaller spaces.

The Bonfire will likely best suit most people as it strikes a solid balance of heat and flames without burning through a ton of increasingly expensive firewood. Plus, the Bonfire is relatively easy to pick up and move at just 23 pounds.

Come on, baby, light my fire

Solo provides clear instructions about how to get the fire going. It’s a typical process, which involves adding some kindling (I use small haybale-style starters out of laziness) and arranging the wood with some space underneath. I followed the directions the first time and it went flawlessly.

The second time I started the fire, I simply threw a few logs into the chamber with a starter set between them and lit it to see if the Solo Stove would enable my lazy ways. Much to my delight, it caught quickly and started roaring in just a few minutes.

In subsequent tries, I found it’s still quicker and more reliable to follow the instructions, but every once in a while, the Solo Stove affords you a lazy start.

The lighting process is likely the only time you’ll encounter much smoke at all. Even then, it’s just a few wisps.

Once the logs have caught, they burn evenly and efficiently. I typically start the fire with a few kiln-dried logs and then add whatever wood I have laying around to the hot fire. Adding wood that’s not all the way dry may cause a little smoke, but it’s trivial, even with moderately fresh lumber.

Once the fire is going, the sides of the fire pit do get very hot. You’d expect the heat—it’s made of stainless steel after all. However, it gets warm enough that even a quick touch is enough to really sting. Leave it on for more than a second and you’re going to find your skin scalded like a slice of Taylor Ham on a New Jersey breakfast sandwich. I was slightly concerned my dopey dog might not notice the heat and rub up against it, but she hasn’t had an issue even after many burns.

As I mentioned before, the smoke control really is impressive. Typical fire pits put off tons of smoke and, because your body provides a convenient wind break, that plume typically ends up billowing directly into your face. The Solo Stove Bonfire effectively combats that effect by directing the airflow and preventing that familiar stinging sensation in your eyeballs while maintaining the ideal fire smell.

We don’t need no water

The updated Solo Stove Bonfire makes cleaning considerably easier than it was in earlier models. The wood sits on a perforated surface that lets air flow in and ash fall through. A removable ash pan in the bottom of the stove catches just about everything that tumbles through the holes so you can easily dump it out once you’re done with your burn.

Pouring water into the Solo Stove while it’s hot can cause damage and dumping sand over the fire (as the manual suggests) makes clean-up a hassle. Your best bet is to let the fire burn all the way down until it’s cool and then dump the ash. The process takes hours, though, so you’ll want to plan around it or just suck it up and deal with the sand.

The Solo Stove Bonfire burns material so efficiently, I thought it might go through wood too quickly, but I was surprised to find that wasn’t the case. Because it burns so efficiently, every log produces flame and heat until it’s down to small coals. It actually felt a little more efficient than my old traditional fire pit because I didn’t need to keep adding wood to make the fire feel substantial.

I put roughly a dozen burns on the Solo Stove during my review process and it shows some wear and tear, but that’s to be expected. The color on some areas has yellowed a little from the smoke and heat, and the grate has blackened a bit, though it’s still perfectly structurally sound. I would expect to replace that grate every couple of years but, otherwise, I expect the Solo Stove Bonfire to last quite a while.

So, who should buy the Solo Stove Bonfire 2.0?

At $399, the Solo Stove Bonfire 2.0 is the Rolex of fire pits. You can often find it discounted, which helps, but it’s still going to set you back considerably more than a basic burn pit from a big box store or a simple pile of rocks stacked in your backyard. It does everything in its power to justify that high price, however. It’s much easier to start than a typical pit and it will last considerably longer than a cheap model pulled off the store shelf. It’s also more efficient with its wood consumption, so start enough fires and you’ll get some of that investment back—especially as firewood gets more expensive.

If your idea of a wonderful evening involves sitting around a fire and having a beer instead of fiddling with kindling, then the Solo Stove Bonfire 2.0 is worth the upgrade. And if you’re truly pathetic when it comes to starting fires, it’s definitely worth it—and I’m right there with you.