An easy way to scan an object and let the world 3-D print it. 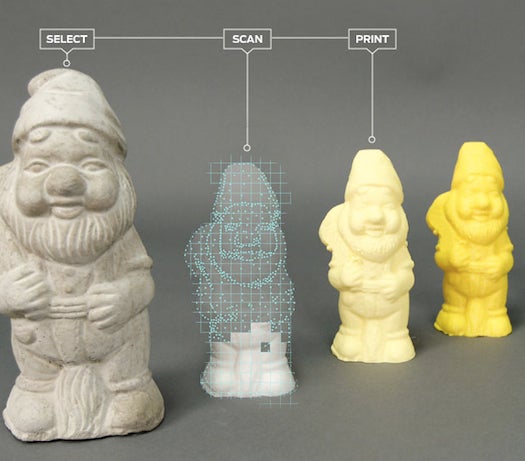 Right at the start of South by Southwest, MakerBot CEO Bre Pettis has announced the company’s 3-D printing desktop scanner: the MakerBot Digitizer Desktop 3D Scanner. It’s exactly what it sounds like: a Makerbot-created tool that can scan real, 3-D objects and turn them into digital files. Those files can then be sent to other 3-D printers, and the objects printed on demand.

Lasers and cameras in the device scan the object and digitize it. After that, with the file handy, it can be shared–ideally meaning hobbyists without much experience in scanning will be able to create and share files with other hobbyists without much experience in scanning. That’s pretty neat, considering one of the main hurdles to 3-D printing has been learning to handle the software. It’s definitely not the first 3-D scanner ever created, and people besides giant industrial corporations have been able to get through the process in their homes. But (and this is early) if the digitizer, still a prototype right now, is simple enough to use, that could help democratize the system a bit.

It’s early, so it’s hard to say where this might fit in the scheme of desktop scanners. We imagine it gets closer in detail to a professional 3-D scanner, but it might produce scans that are easier to master but similar in quality to what home hackers have gotten with a webcam or a Kinect (or the 3-D scanning functionality that Microsoft announced this week will be available on the Kinect). Either way, this lines up nicely with Makerbot’s pitch: make the technology as accessible as possible and let the community do the rest. There’s a long way to go, too, when what’s seen as an “affordable” 3-D scanner from 2009 can run to almost $30,000. But we’ll still have to wait a while, of course, before we see exactly how this digitizer affects that community.