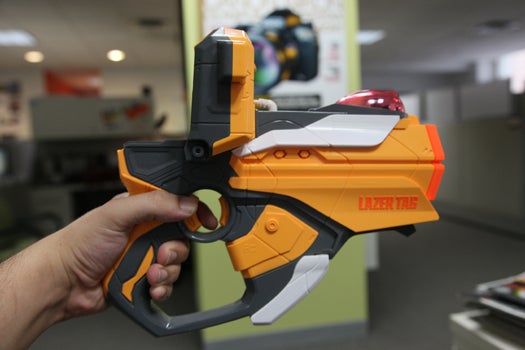 Born in 1984 as the Star Trek Electronic Phasers, laser tag has always been a great halfway point between games and reality, letting kids and adults go toe-to-toe over the din of electronic blaster noise while still in their living rooms. Nintendo’s NES Blaster, the beam-based controller for the game “Duck Hunt,” was released the same year, but this was “Duck Hunt” where the ducks fired back. After that, it was often relegated to one-off games in arenas built by businesses, whether Dave & Buster’s or a company specializing in the sport. There have been numerous home blasters released along with those, of course, and now the styrofoam sculptors of Nerf are trying to bring the idea into the present by building the experience around Apple’s iPhone and iPod Touch.

The Lazer Tag Blaster is a standard plastic gun that piggybacks on a free app for the iPhone and iPod Touch. Plug the phone into a cradle on the gun’s back, then connect it through the phone’s headphone jack. The screen works as a viewfinder that you can spot opponents through, and it also displays stats on your health and ammo. In multiplayer mode, the gun works as the target: hit it close enough with a beam and it picks up on the shot, delivering damage to the opponent. (You can also play through your phone sans gun by downloading the app, if you’re so inclined. But then you won’t be enjoying multiplayer.) So instead of wearing vests or armor, like previous laser tag sets might force you to do, this one senses hits on the gun itself.

Another big draw is the single-player mode, something pretty much impossible before adding a smartphone to the mix. If you’re flying on a solo run, virtual drones swarm you on the phone or iPod’s screen, and you use your blaster to knock them out while accumulating points to spend on better weapons and special abilities. (Although it seems to take a lot of matches to build up enough points, unless you want to bypass that by coughing up a couple dollars through the app store.) You stay in position and turn 360 degrees to fire at the machines, which are superimposed on whatever environment you’re in. 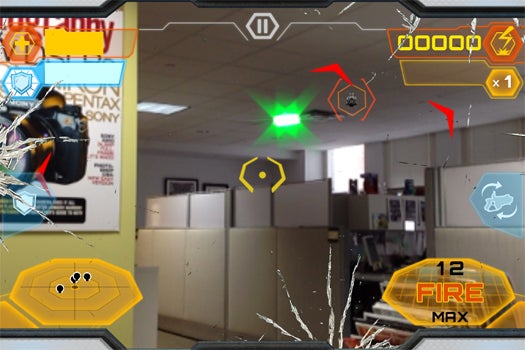 The multiplayer mode really seems to get it right. To shoot, you have to open yourself up to being shot at. It values (fair) strategy in a game that should be all about strategy, even if it’s for kids. We ducked through the halls of the PopSci offices, and a four-person free-for-all was enough to make you constantly afraid someone was flanking you. I suspect two people would be enough in the right environment, even though the game can operate with up to 24.

The display looks better than I expected, too. I’m wary of this sort of thing, usually: Taking a real environment and placing it in the context of a virtual one can wind up looking like those photobooths with options for adding hearts and suns to your portrait. But this one works. Your virtual screen starts to crack when you’ve taken too much damage, and it’s done just cartoonishly enough to be good. It uses the display screen to its maximum potential, which, if someone’s going to invest in one of the guns over an iOS-less model, they’ll probably expect.

The design of the blaster also works well: It’s heavy, but you’re meant to hold it with two hands so you can keep your secondary digits on the reload button (more strategy!) and a button on the outer side of the trigger lets you use your special attack.

Man, this thing is loud. Yes, you can adjust the volume, and you’ll want to do that every single time you play. The gun signals “DANGER DANGER DANGER” whenever it detects an enemy within a few feet, even if you were completely hidden. To be able to make the most out of the game, you’ll have to silence it (less strategy!). That’s kind of unfortunate, since hearing the pew pew of a blaster unloading is one of the joys of laser tag.

The single player mode is fun the first couple of times, but I don’t think I’d want to take much more of that. (I don’t know if a kid would feel differently.) It’s really neat. You have to spin around in your chair or crouch to fire across your living room and square in the eyes of a drone. But this is where it differs from a toy like the Wii or Kinect. It’s still “immersive,” if you want to call it that, but the enemies in those are put into a small, defined area–a TV. If you can keep your eyes on that, you’re fine. It’s fun for a minute having to move in all directions, but that gets tiring quick.

It also has to be said that there were some slight bugs. The app would crash unexpectedly midway through a game, forcing players to pause and tap back into action a minute later. Sometimes our phone screens went dark after being put into their cradle at the back of the gun. Since you’re doing everything through that, you’re flying blind. 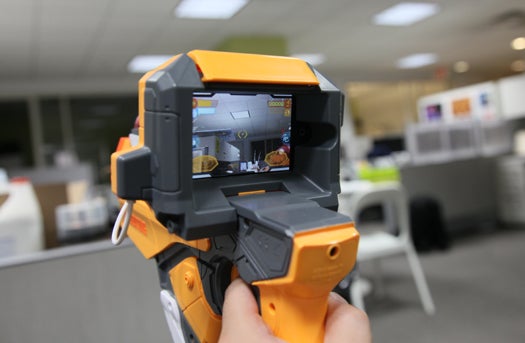 The Blaster’s Heads Up Display

A two-blaster set goes for $74.99, while a single blaster will set you back $39.99. The app is free. That’s about the same price as a lot of home laser tag sets, and it doesn’t seem too unreasonable for what you’re getting. What really sets the game apart from some other model, like the Lazer Tag Mobile Attack Blasters ($99.99 on Amazon), are the interactive features. If you have an iPhone and are in the market for this, then why not? Even if the sum is less than its parts, it’s something a little bit more interesting.

Getting a group together and playing a few rounds was a lot of fun, enough that I’d definitely consider getting it as a Christmas gift if I had a couple of iPod Touch-toting cousins who were into this sort of thing. Could I see myself playing the solo mode for hours? No, although admittedly I’m not the target audience. Still, even if I was, laser tag should be shared, and the Lazer Tag Blaster nails that aspect.