A battery-powered 500GB hard drive that wirelessly beams video and audio to your iPad, iPhone, or Android phone--anywhere 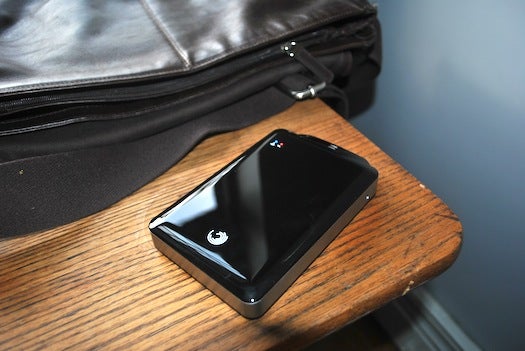 The Seagate GoFlex Satellite is a simple idea: take a big hard drive with you, wherever you want to go, that doesn’t need any advanced setup, that doesn’t need to be connected to a Wi-Fi network, and can beam your music, videos, photos, and documents to whatever device you happen to have with you–iPad, smartphone, laptop, whatever. And it does exactly that. Congratulations, iPad/smartphone/etc owner: You now have 500GB of extra storage, no matter which device you’re using.

The Seagate GoFlex Satellite is the first portable hard drive (it uses a 2.5-inch laptop drive, in a 500GB capacity) we’ve seen that’s designed to be used on the go with another portable device. It’s got a battery Seagate says lasts for about five hours (which may be slightly optimistic, but is not egregiously far off), connects via USB (including USB 3.0, if you’re lucky enough to have it), and, most importantly, beams its contents to a mobile device via Wi-Fi. It comes with apps for Android and the iPad that make streaming easier, but it can be used with basically any Wi-Fi enabled device, including laptops and tablets. At the moment, you can connect up to three devices at a time to it.

The thing just works. It charges really, surprisingly quickly over USB, then you press the power button on the drive. Look in your available Wi-Fi networks setting on your phone/tablet/laptop, pick “GoFlex Satellite,” then open up the app, and bam: all of your stuff, available anywhere. It spits out a pretty good wireless radius–you’ll probably want to be in the same room with it, but I used it a few times while stuffed in my backpack and it worked just fine. Streaming is very fast, the app is simple and easy to navigate, and streaming video quality was as good as if the file was on the device’s own storage.

If you’re using a device that doesn’t have an app (which are only available for Android and iOS at the moment), don’t fret: you just connect to the GoFlex’s Wi-Fi network as usual, then open up your web browser and go to any address. You’ll be automatically booted to a web interface that just about exactly replicates the app’s. Easy!

I love that it works with just about any device: the company who made my ancient Palm Pre Plus doesn’t even exist anymore, but the phone can stream episodes of Louie from the GoFlex without blinking.

Plus, it’s a nice-looking hard drive, fairly small, and Seagate is my personal favorite hard drive manufacturer–I’ve found their drives to be very reliable, which is about the only thing to like or dislike about a hard drive, normally. Of course, you can connect it via USB to a Mac or Windows machine and it appears as a normal 500GB hard drive. 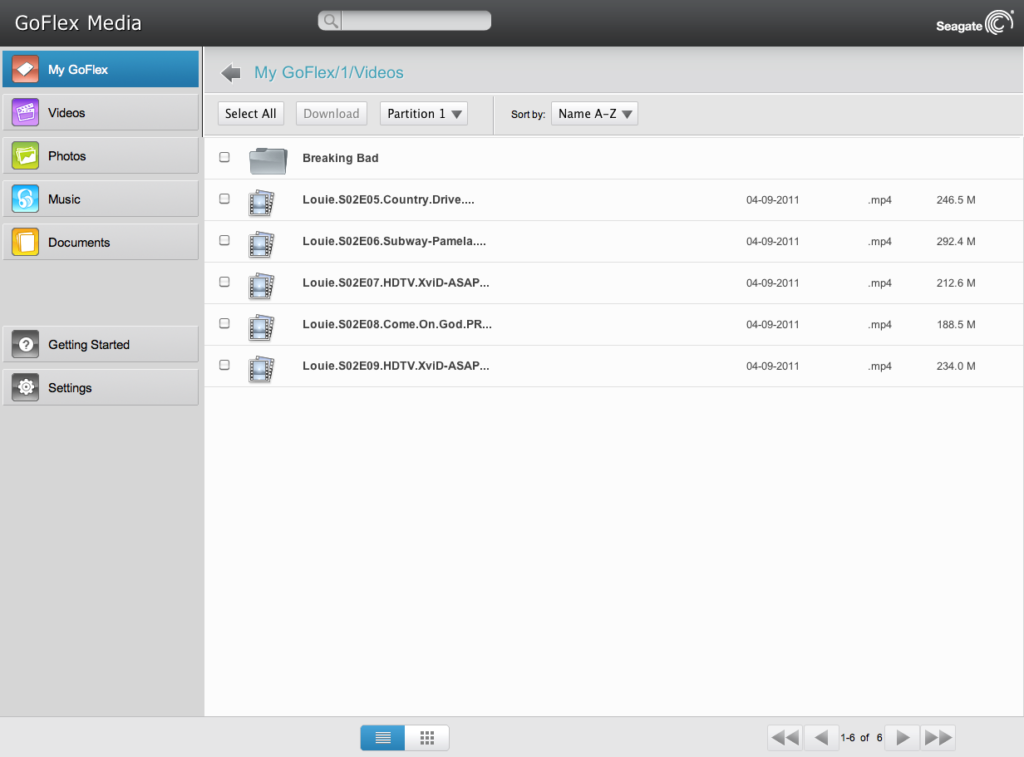 It uses a non-standard USB cable, which is something we always frown on. If you lose the cable, you’re basically out of luck. It requires the installation of a teeny bit of software before you can connect it via USB to your Mac (I think because it’s NTFS-formatted, which Mac OS can’t write to)–annoying, but only for a second, and then it worked perfectly.

To use it wirelessly, you do have to log into the GoFlex’s wireless network, which means you can’t do anything else on the internet while you’re connected. Trying to open up a page in your web browser, for example, will just kick you back to Seagate’s GoFlex browser. Oh, and this isn’t really fair, but your device can only stream files that are supported by your device in the first place–if your iPad can’t play .MKVs, you won’t be able to stream them from the GoFlex either. So I ended up converting all my videos.

$180 from online vendors like Amazon and Newegg. That’s about a $90 or $100 premium over an equivalent drive without the wireless functions or battery. It’s not necessarily cheap, but I wouldn’t say it’s too expensive either, if you want one.

I really like the GoFlex. It’s not necessarily an essential purchase, as much of our media lives in the cloud, at Netflix or Hulu or Rdio or Google Docs, but not all of it, not yet. What I especially love about the GoFlex is that it works. Wireless gadgets often have issues–various incompatibilities, all completely inscrutable, because who has any idea how wireless really works? We’ve had issues with these kinds of devices, like the Roku and Eye-Fi, before. But the GoFlex works exactly like it should, and as most of our gadgets (especially those made by Apple) have basically no way to add storage, I could see it being a great help on trips or vacations. If you just need some expandable storage, well, there are cheaper options. But if you’re already thinking about all the uses you might have for 500GB of storage you can access from any device, this is the gadget to get.