Rdio and MOG Jump on the Free Music Bandwagon

Can eliminating any cost at all give subscription music services a leg up in the U.S.? 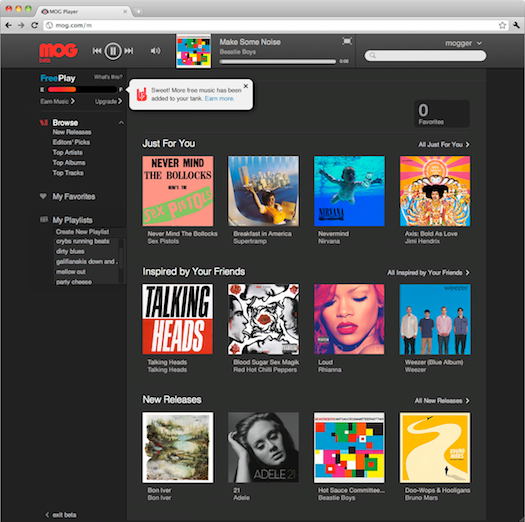 When Spotify launched in the U.S., it came with a ton of hype and momentum, but not actually a ton of improvements over our homegrown services, namely Rdio and MOG. The big difference, the difference that all the analysts said would finally allow subscription services to make it big in this wonderful, backwards country of ours, is Spotify’s free service. And now Rdio and MOG have debuted their own free versions.

As a quick brief, Spotify, Rdio, and MOG are subscription music services–it might be easiest to think about them as Netflix for music. You pay a very low flat monthly fee, and then you get access to all the music you can stream. There are some differences in the catalogs of these services, but they all have millions upon millions of songs, so it tends to be a rarity when you want to listen to something they don’t have. All offer some kind of mobile app, usually with a download option so you can listen even when you don’t have service (like on the subway). Of course, as soon as you stop paying, you lose your access, but we really love these services; that instant when you realize you can listen to anything, absolutely anything, on any device, completely legally, gives you that “whoosh” feeling of “whoa, this is the future.”

Spotify’s free version, which they refer to as “freemium” but we will not because that is not a word (according to the Scrabble dictionary, which is the only dictionary anyone needs), is necessarily crippled: It’s ad-supported, but there still need to be a few big limits to encourage heavy users to eventually make the leap to the paid versions. The tiers have become pretty standard: A free version, ad-supported in some way, which limits you to a web-only interface and likely some kind of capped amount of music you can listen to, sits at the bottom tier. Above that is a $5-per-month tier, which gives you unlimited access and no ads. And above that is the $10-per-month tier, which everyone should really get because seriously, $10 is not a lot of money, which adds offline downloading and, most importantly, access to the smartphone app.

Rdio and MOG both have strengths Spotify doesn’t. Rdio’s interface is easily the nicest of the three, and its “collection” idea (in which you build a music collection within Rdio, rather than relying on playlists) makes much more sense than Spotify’s starred playlists concept. MOG has great editorial features and a catalog that leans towards more independent tastes. And now they’ve both announced they’ll have free versions as well.

MOG’s is a little bit convoluted. The free version will be ad-supported, though not for the first 60 days. There will be a limit on how much you can listen to, but only sort of: you get a “tank” that shows how much listening you can still do each month, but you can also refill that tank in almost a game-like way, by sharing music via Facebook, listening to ever more music, interacting with ads, that kind of thing. It sounds like the kind of idea advertising executives love (“this way, they’ll want to click on the ads!”) and the kind of idea that users tend to dislike and/or ignore, but it does give a way of getting more free music, which we like. MOG’s free service will launch today.

Rdio’s is much simpler, almost feeling rushed. Rdio will now have a free version, without ads, though it’s not yet clear whether there will be any sort of limit on how much you can listen to (we would assume so, otherwise there’s no reason to jump to the $5-per-month tier). Rdio’s free service will launch “soon.”

Will these free versions encourage more users to jump into the subscription well? I certainly hope so; these are great services, all of them, and definitely have the potential to, for example, curb illegal pirating, even if they don’t earn much for artists. All of these services, especially MOG and Spotify, lean on Facebook integration, which is a great idea: you can see what your friends are listening to, share or recommend music, all without having to worry about actually getting the music itself, since you already have access to it. We just hope enough people sign up for the paid versions to keep these services afloat.