Amazon Kindle Touch Review: Should You Touch Your Books?

It's got 3G and a touchscreen, but are those worth the price bump over the stocking-stuffer $80 Kindle? 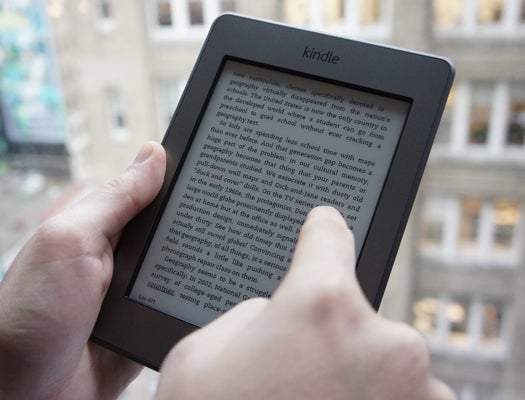 The Kindle Touch is Amazon’s top-of-the-line e-ink reader, a compromise between a tablet like the Kindle Fire (easy typing, faster navigation) and the e-ink, single-focus ebook reader named simply Kindle. But Amazon’s relentless price slashing makes me wonder if there’s a need for this in-between.

This is the first touchable Kindle. That’s the big difference. Otherwise, not too much is brand-new compared to past Kindles: it’s got the same e-ink screen as the $80 Kindle, the same (optional) WhisperSync 3G as the Kindle Keyboard, the same massive catalog of books, the same ease of use we’ve all come to frankly demand from Amazon.

I should say up front that I was not sure I’d like the Touch. Ebook readers are one of the few devices that I had always assumed needed buttons–you didn’t want to get your fingergrease all over the screen, didn’t want to touch the screen at all. The Kindle’s buttons fell perfectly under your thumb–why change that? But I really like the way the Touch’s operations work. The interface is very simple: touch along the top border for the menu, along the left border to go back one page, and anywhere else–more than half of the screen’s surface–to go forward one page. It works, and it’s more responsive than I expected. Also, I have yet to leave an excessively disgusting fingergrease smear on the screen, and it escapes the reflectivity problem seen in some of Sony’s touch-enabled e-ink readers.

What I especially love is how the touchscreen allows Amazon to slice off the lower few inches of the older Kindle without losing any functionality. You don’t need to use the keyboard that much, really, but when you do, the $80 Kindle’s directional pad was a real pain. The touchscreen on the Touch eliminates the need for that sacrifice, so it’s small and functional. The hardware feels great; small, light, attractive. I like the new home button, too.

The touchscreen isn’t perfect. I can’t think of a better layout for the “touch zones,” but if you’re holding the book in your right hand and need to go back a page, you have to stretch awkwardly across the width of the Kindle to tap the screen along the left edge, like playing a game of Twister with your fingers. That really hurts your ability to read one-handed, a major benefit of the Kindle over books. The other option is a swipe, like you use to flip pages on a tablet or smartphone’s Kindle app. But that doesn’t feel natural, since the page doesn’t move with your finger the way it does on an LCD, and I found myself forgetting which direction I was supposed to swipe. 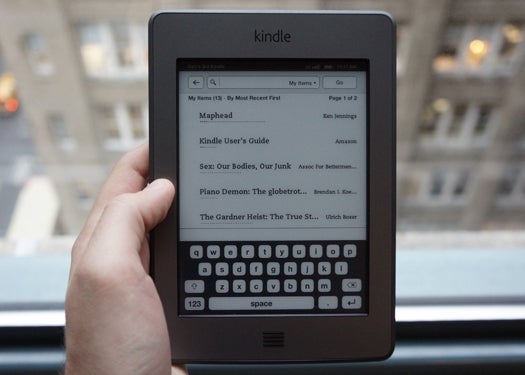 I found more accidental presses with the Touch than I have with any button-using Kindle, and Amazon’s eternally frustrating opposition to actual page numbers can sometimes make it hard to figure out where you were and how to get back when you accidentally turn a few pages. Sometimes it just feels too sensitive. The screen isn’t capacitive like a smartphone or tablet, so any brush with any object–not just electrical-stimulus-giving fingers–will trigger a touch.

A Note About 3G
The Touch uses WhisperSync, Amazon’s not-lauded-nearly-enough system of syncing bookmarks (among other things–read more about WhisperSync over in our Kindle Fire review) between devices. WhisperSync works on Wi-Fi-only Kindles, but not that well; you have to be connected to Wi-Fi, after all. With the 3G-enabled Kindles like the higher-end Kindle Touch, you are constantly synced. Read your book on the subway, stick it in your backpack, and then the next time you’re waiting in line, or in the bathroom, or whatever, whip out your smartphone, open the Kindle app, and your place is saved. It’s great. Plus, with 3G, you can download new books anywhere.

Alas, Amazon seems to have made a change in their 3G plan. Before, the Amazon 3G was an almost suspiciously good deal: it was entirely free (as in, no signing up, no monthly plan, no nothing), and let you browse the web as much as you wanted, with the not inconsiderable limitation of using the Kindle’s e-ink screen. You were never going to watch Hulu, but you could, even in other countries, check the news or your email, for free. No more. My 3G-enabled Kindle Touch demands that I connect to Wi-Fi before using the web browser. That kind of sucks, and I could see it being discouraging for those thinking about springing for the $50 more expensive 3G versions.

There are two tiers, with two options each. The Wi-Fi-only Kindle costs $100 (with ads; they are only on the homescreen, never showing while you’re reading) or $140 (without ads). Add 3G, and it’ll run you $150 (with ads) or $190 (without ads). I find the ads only mildly irritating, which is high praise, though I do like the artist portraits Amazon uses for the screensaver on the ad-free versions. 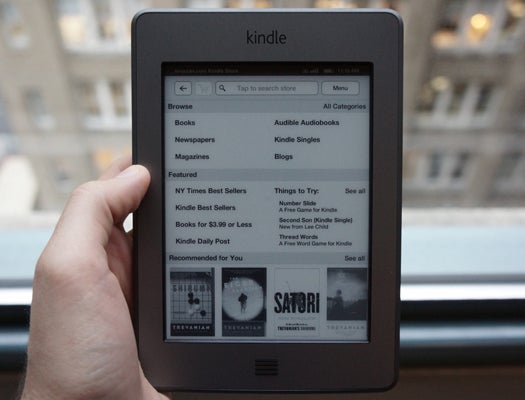 So, I am somewhat divided on the Kindle Touch. I like the touchscreen for some things–selecting books from my list, shopping in the store, entering text–but for the thing I do most with my Kindle, turning pages, I’m not convinced it’s better. The loss of 3G web browsing stings, though I still love WhisperSync. What’s very weird about this new Kindle is the way the $80 Kindle has made it feel overpriced, when it never did before. Is it really worth the extra cash? I’m not so sure.

The other question, the more basic one, is: should you even get a Kindle? The only real competitor at this point is Barnes & Noble’s Nook line, which is also great. The Nook Simple Touch is very comparable to the low-end Kindle Touch: tiny, touchscreen, $100, library book access, large catalog. Amazon has free books online; Barnes & Noble has free books in-store. Really, it’s a toss-up for me: I happen to like the Simple Touch’s design a little more, but I’m already locked in to Amazon’s marketplace. You’re choosing a vendor more than a device at this point, so I’d recommend going with whichever you’re more comfortable with.

You won’t be unhappy with either–both of these devices are right at the top of the game, and all my faffing around about the Touch shouldn’t conceal the fact that Kindles, including the Touch, are awesome–but I’m hesitant to recommend it over the vastly cheaper non-touch version.