The next version of Samsung’s blockbuster Galaxy S Android lineup, sensibly named the Galaxy S II, is shaping up to... 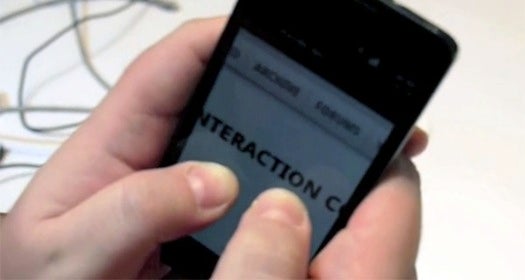 The next version of Samsung’s blockbuster Galaxy S Android lineup, sensibly named the Galaxy S II, is shaping up to be a very impressive platform. That newest innovation we’ve seen from Samsung, via Android Community, is a change from the now-standard, Apple-pioneered “pinch-to-zoom” interface. Instead of pinching, you simply move the phone forwards and backwards to zoom in or out.

A little background, first: The Galaxy S II brings some new power and size to the Galaxy S platform, with a 4.3-inch (as opposed to its predecessor’s 4-inch) screen, a dual-core processor, a variety of 4G and faux-4G (faux-G!) connections, and an absurdly slim profile (at 8.49 mm, it’s thinner than the iPhone 4). It’ll also come with the next version of Samsung’s mostly-tolerated TouchWiz skin, which includes a few bells and whistles. The latest bell (or is it a whistle?) is this new zoom tool.

The phone has both a gyroscope and an accelerometer, and it’s not clear which is being used (of course, it could be both). But the idea is very simple: Put two fingers on the screen, and move the phone forwards and backwards to zoom in and out. In the video, it looks super smooth, which is very important, although whether it proves to be as natural as pinch-to-zoom (which was used on the original Galaxy S, along with just about every other phone on the market) remains to be seen. Still, it’s good to see some interface innovation from Samsung–let’s just hope this version of TouchWiz is better-received than the last.