Samsung Galaxy S III Review: A Phone in Need of an Editor

Samsung has been let free to stick all kinds of ideas into their phone. The results are...mixed 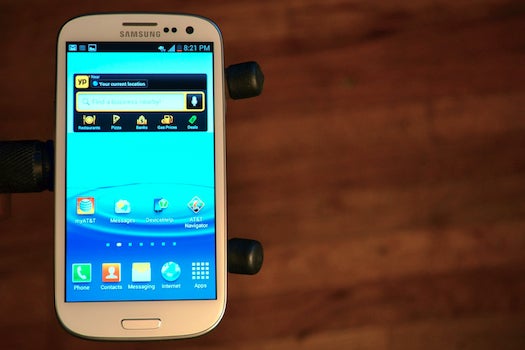 The Samsung Galaxy S III is going to be a wild smash hit, I’m sure. And it’s a very good phone; a lot of people will be very happy with it. But stepping back to look at the current state of Android smartphones, it’s interesting to look at the S III compared to last November’s Samsung Galaxy Nexus—a slightly older but extremely similar phone, loaded with a pure install of Android 4.0 that Samsung wasn’t allowed to mess with, on Google’s orders.

This time, Samsung put their hands all over the Android install inside the Galaxy S III, and it’s a phone crammed full of ideas–new gestures, camera options, sharing options, big and strong hardware, and the best implementation of near-field communication we’ve seen yet. But do all these new features really improve the experience? Or is it just a phone badly in need of an editor–someone to say “no”?

The Galaxy S III is most similar to the company’s own Galaxy Nexus. The Nexus is Google’s reference line–there’s one Nexus for each version of Android, the first phone to have that version, and each Nexus has a completely clean, Google-approved version of the operating system with no carrier interface add-ons allowed. The Galaxy S III has slightly improved hardware and adds Samsung’s TouchWiz, an interface skin laid on top, and a whole mess of new Samsung-specific features.

Samsung is the biggest phone-maker in the world. The Galaxy S line is its flagship, the best it has to offer. This year’s, the Galaxy S III, has a very large 4.8-inch screen, though the body is about as thin as an iPhone 4S (which is to say, extremely thin). It has built-in NFC, 4G LTE compatibility, an absurd number of new camera features, gestures, and sharing options. There are tons of new ways to share documents, photos, videos, files, and music. And it comes with the newest version of Android, Ice Cream Sandwich, modified a bit to Samsung’s liking. 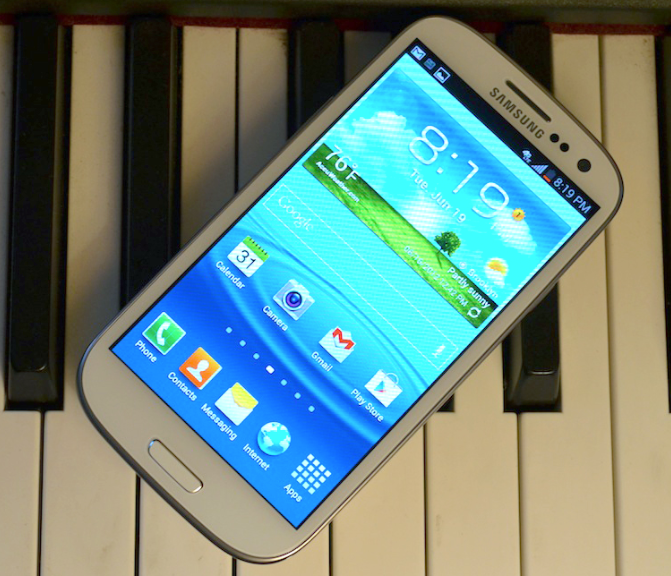 Speed: The phone is fast fast fast fast FAST. It’s so fast, with its 2GB of RAM, that it makes up for what I have long assumed is a software weakness in Android–Android phones often have trouble keeping up with your finger as you swipe and dart around. Not here. The camera app, too, is screamingly fast, with basically no shutter lag at all. (More on the camera below.)

As a modern Android phone with a ton of horsepower, the GSIII tears through Google apps. Android has always had the best Maps, Gmail, Reader, and YouTube implementation of any platform, and the Galaxy makes those legitimately fun to use. After months with an iPhone, it was great to get back into Android’s Maps app.

Software: Ice Cream Sandwich, the latest version of Android, remains very solid even with Samsung’s TouchWiz layered on. I love the WebOS-inspired swipe-to-close programs–just grab it and throw it off the side of the phone, like you’re heaving unwanted cargo off of a ship. I love the subtle, not-too-bright blinking of the LED indicator light above the screen–blink, blink, you have a new message. Thank you, Blinky. It manages to have an external microSD slot and a replaceable battery without sacrificing thinness. The notification shade which you pull down from the top gives you quick access to settings, Wi-Fi, Bluetooth, GPS, and more. It’s years ahead of Apple’s, partly because, well, Android has literally been doing it for several years longer than Apple. 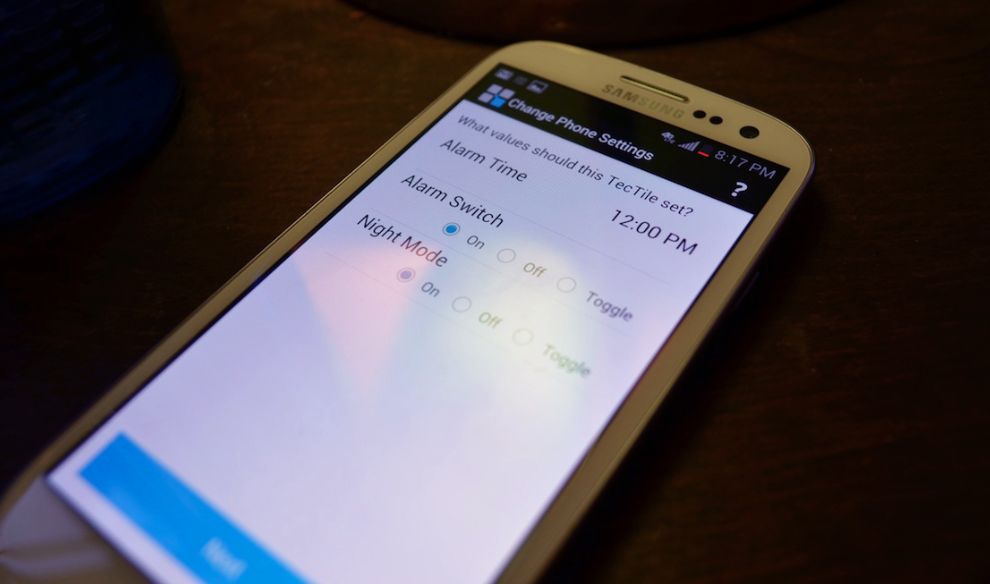 NFC: This is probably my favorite part of the phone. Samsung is selling “TecTiles,’ which are little NFC stickers, at five for $15. Like the Galaxy Nexus, the Galaxy S III has NFC built in. When you tap a TecTile with the back of your phone (provided you’ve downloaded the free app), you’ll be able to program the TecTile to trigger all kinds of fun things. Stick one on your bedside table, so when you put your phone down, it’ll turn the alarm clock on, set the phone to nighttime mode, and make sure the volume’s at the right level. Never worry about forgetting to set your alarm again. Stick an NFC sticker on your front door, tap it when you go inside, and it’ll connect to your home Wi-Fi network.

It can change settings, make calls, check you into Foursquare, show a message, and more. I could see restaurants sticking Foursquare-branded NFC stickers on entryways–tap to check in. Or movie theaters with NFC stickers on the wall, with a big sign saying “Tap Here to Silence Your Phone,” alongside a picture of a dancing popcorn box making a shushing motion.

NFC, or near-field communication–check out our primer on the subject if you’re unfamiliar with it–is one of those latent technologies that’s cool, but that in America has proved hard to market. The TecTiles are legitimately exciting; they’re simple but useful. You can immediately see why they’d be a good thing to have. They work perfectly (although I’d prefer some more advanced options). And that’s not the only way to use NFC; there’s also a feature called S-Beam that lets you tap the back of your phone to somebody else’s phone to share files. It works via Wi-Fi Direct: the NFC triggers an ad-hoc Wi-Fi network, meaning a network just between two devices, without the need for a router or Wi-Fi hotspot. Wi-Fi networks are fast, so you can transfer big files between phones easily and quickly. You’ll have to find someone else with an NFC-enabled phone, but it’s genuinely futuristic.

In a phone that is overstuffed with ideas, this is one that I really like. 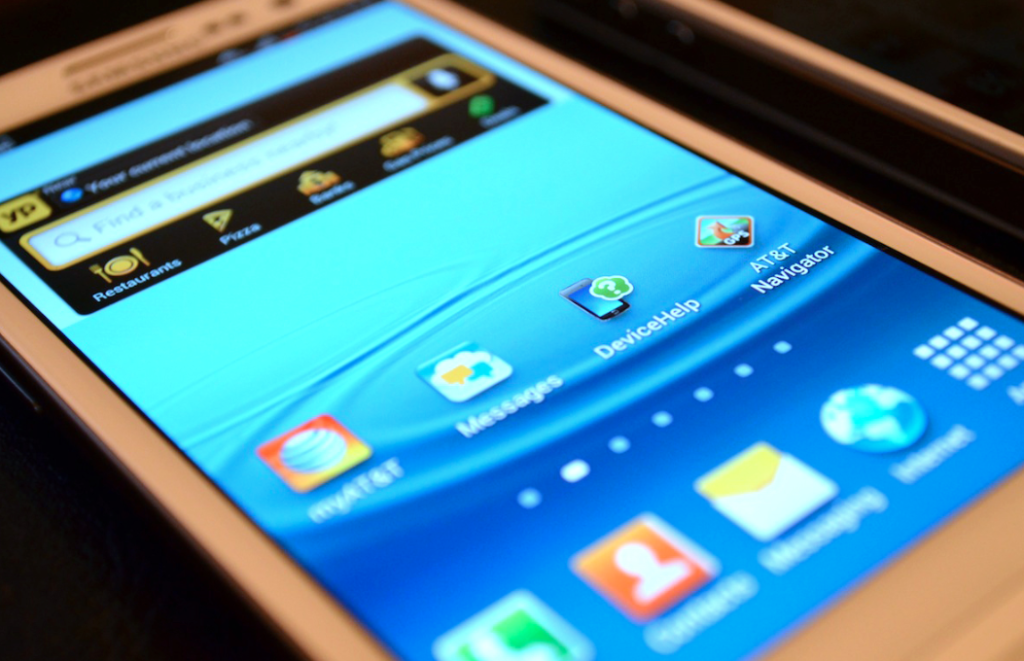 This phone is crammed full of ideas. We appreciate the thought, but not always the execution.

Your first few days with the phone will be laden with pop-ups telling you about new ways to do simple things. The camera has a bajillion modes, settings, and options, far more than you’d need, and, frankly, more than the quality of the camera in this phone actually warrants. There are a million ways to share things, from DLNA to AllShare to AllShare SugarSync to ShareShot. You’ll need a tutorial on each. There are a dozen new gestures, some good, some bad, but all will be bombarding you with newness. New things you have to learn.

These aren’t all bad features. Some of them I even like. And I’m not opposed to new features. But all at once, they are exhausting. They make the phone feel much more complicated and intimidating than it really is. It seems like Samsung tested all this to make sure it works, but not to see if anyone would ever actually use it. An ideal phone, just like anything else in life (#philosophy), should include just the things that are good. We don’t need to have the other things just because they exist. I mean, really, did we need a way to pan around web pages in the browser that requires you to move your entire body?

Hardware: The hardware design cannot be classified as bad, but it’s not pushing anything forward. Samsung’s designers are stuck on this curvy featherweight plastic thing when everyone else has moved beyond it to substantial materials like glass and metal. It’s light, sure, and it doesn’t feel fragile, but that’s not the same as feeling good. Just poach a designer or two from Apple, Microsoft, or even Nokia, huh?

The screen is not great, which is surprising, since Samsung is known as a pioneer and leader in LCD tech. This is a PenTile display, a technology used by most Android phone-makers (Motorola, HTC) to save battery life. It’s like looking at your phone through a fine screen door. It’s also not especially bright, rendering it so reflective outdoors that it’s basically unreadable in direct sunlight. THe GSIII has a 720p display, and it’s not a bad screen–it nicely gives you different color temperature options for those who find it too cool or too warm–but I’m not particularly impressed by it. And considering it’s summer here in NYC, I found its difficulties in sunlight to be a major problem.

I appreciate that Samsung has finally condensed the line–remember that the Galaxy S II was offered in about twelve different variations, each with silly names, and that this one is simply called the Galaxy S III wherever it appears–but I’m still annoyed that it’s only available with a giant screen. Samsung does sell some smaller phones, but they’re also not as good; if you want a good phone, you have to get a big one, and if you want a small phone, you have to settle for a crappier one. It is blatant discrimination and I hope the League of Small-Handed Gentlemen stage some kind of protest in which they hold tiny signs.

The battery life is about what I expected from a 4G LTE phone with a giant screen: just okay. It’ll get you through a day of moderate use, but heavy use will leave you very low on juice by that night, and you can forget about not charging it at night. Get used to bringing your chargers around with you, people. The voice command is Samsung’s, not Google’s, and it tries for a Siri-like understanding of natural human language. It’s pretty bad, and very rarely understood what I was trying to get it to do. 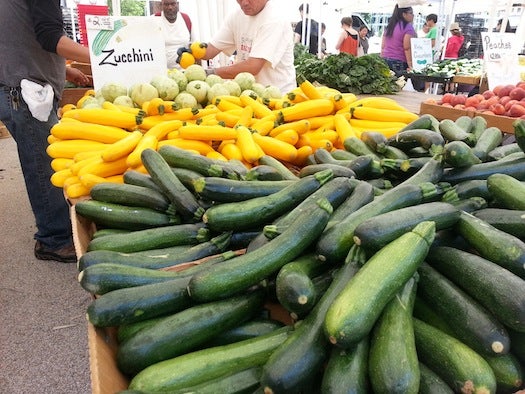 The camera is amazing on paper, but I actually wasn’t very impressed with the shots I took. They seem washed-out and lack the kind of vibrancy and detail that the iPhone 4S has. And it was slow to deal with sunlight, often leaving big white splotches in my photos. It’s kind of an indoor phone, I guess.

No word on price yet. It’ll be available on all four major networks (Verizon, AT&T, Sprint, and T-Mobile) first online, and then in stores “in the following weeks.” It’ll be available in 16GB and 32GB versions, though it has that microSD slot so the storage is definitely flexible.

If you’re looking at an Android phone, you should be looking here, you should be looking at HTC’s One line, and you should be looking at the Galaxy Nexus. Me personally? The Galaxy S III would be my third choice of the three. I like the HTC’s entertainment-focus, and I like the construction and the screen more. The Galaxy S’s speed and its smart NFC implementation are great, and I even like some of the goofy gestures–and as an adult, I am fully capable of ignoring the stupid ones (here’s how I did it: every time the phone asked me if I wanted to turn something on, I refused, and then I told it never to bother me again). But here’s the more important thing: Android is still best when it’s left alone (or mostly alone, as in the HTC One). The Nexus, the cleanest, Google-approved Google phone, is still reliably the better Android phone. It’s a more reasonable size, with a better screen. It’ll get updates first. It won’t come with tons of apps pre-installed. It won’t bug you about weird gestures. And best of all? You can still take advantage of the NFC TecTiles–Samsung tells me they’ll be compatible with the Nexus as well.

Sometimes I just want to grab Samsung by the lapels (already, I have imagined Samsung is a corporeal being, gender non-specific, dressed in business casual) and shake it. “Just stop!” I want to say. “You don’t have to use every single idea you’ve ever had!” The Galaxy S III is a great phone, for sure. But it’s not what I’d buy.