Logitech's Google TV device, the first of its kind, offers lots more than Apple TV. But is it worth the price? 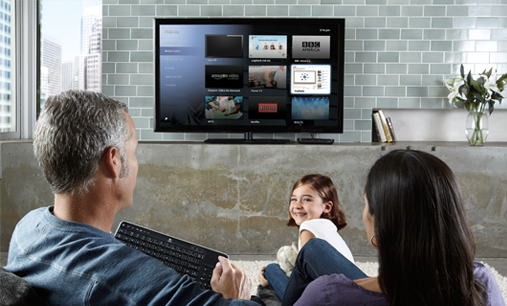 Logitech just announced the very first Google TV box, to be called the Revue. With video calling, a full QWERTY remote, and lots of apps, it’s much more capable than the Apple TV (which is either “streamlined” or “barebones,” depending on who you ask). But to get the full Revue package, you’d have to spend enough to buy four–yes, four–Apple TV units. Eeep.

Google TV is coming. Fundamentally different from, say, Apple TV, Google TV wants to insinuate itself into your existing media setup. It wants to work with your DVR, your cable subscription, your Netflix subscription, and your home network. It might be found built into your TV or Blu-ray player (Sony will make some of that integrated hardware), but the very first device about which we’ve got concrete information is a set-top box.

Our sister site, Sound & Vision, was actually at the event. Click here for an exclusive gallery, and here for their coverage of the Logitech Revue.

Logitech’s Revue is the first Google TV device to get a price and a release date, and it’s also the first to give us a clear idea of how Google TV is going to look. The Revue is at its core a set-top box, packing HDMI-out, two USB ports, Wi-Fi, and Ethernet, which will cost $300. But Logitech set up an exclusive partnership with Dish Network, so if you’re a Dish subscriber you can snag it for $180. That $300 package also includes the Revue keyboard remote ($100 by itself), which is like a slightly smaller wireless computer keyboard with a little trackpad and some specialized buttons. 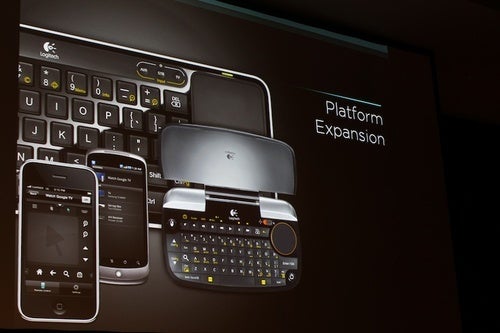 The keyboard that’s included is pretty big, and not everyone will want what’s basically a desktop keyboard on their coffee table. So Logitech also announced a new version of their teeny DiNovo Mini keyboard, a little palm-sized QWERTY keyboard with its own tiny trackpad. That’ll cost $130. Of course, there’s also an Android and iPhone app that’ll let you use your phone as a remote control–probably the best option, and one that also happens to be free.

The final piece of the puzzle is the webcam. Logitech says eventually all its webcams will work with Revue, but at the moment, there’s only one that can handle the specific brand of compression needed for Revue video chat. The webcam is equipped with a Carl Zeiss zoom lens and dual microphones (supposedly for better sound in a living room setting) costs $150.

Assuming you can get by with either the included keyboard or a smartphone app, the total package costs $450. The Boxee Box, which does not integrate your existing cable TV subscription but does support a wider variety of web content, costs $200; the Apple TV, which supports only iTunes, Netflix, and YouTube, costs $100; and the cheapest Roku, which (starting soon) supports Netflix, Hulu, and other apps like Pandora, costs $60. Conclusion: The Revue is damned expensive.

Logitech is also giving us the fullest view yet of how Google TV will actually work in your home. A lot of the Google TV experience relies on apps–Google recently released a video showing exactly how important apps are–so it’s a little bit disheartening to know that the Android Market, the central repository of Android apps, won’t be coming to Google TV until 2011, well after launch. But the Revue will still launch with a ton of worthwhile apps, including Netflix, Pandora, Napster, CNBC, NBA Game Time, and the Chrome browser (rejiggered for the TV screen).

The Netflix integration does not look thrilling–Engadget notes that it looks disturbingly similar to the last-gen Roku integration, which lacks such basics as search and the ability to add titles on the device. Hopefully that sees an update soon; the Apple TV’s Netflix integration is excellent, and Google TV has to keep up. Hulu, too, is a no-go, at least for now. The Logitech spokesman said that Hulu currently blocks Google TV, but that the companies are discussing ways to un-block it. That, too, is a must for Google TV.

What’s both curious and a little troubling is that even in this very first iteration of Google TV, it’s showing signs of the splintering that’s so common to Android phones. An HTC Android phone can’t do everything a Motorola Android phone can do, and vice versa–a problem not shared by, say, the iPhone. In the case of the Revue, it seems Logitech’s deal with Dish resulted in some solid integration with Dish DVR. But something like a Sony Google TV device might not support Dish’s DVR integration. That means you can pick and choose the precise right device for you, but also could prove frustrating and complicated.

Logitech will also be using its own media app, which pulls in audio and video from computers on the network. It looks pretty solid, and supports a wide range of formats (including the pirate-friendly .MKV, yes!) but I do wonder why there isn’t a built-in Google TV media player–or at least why Logitech is bypassing it. 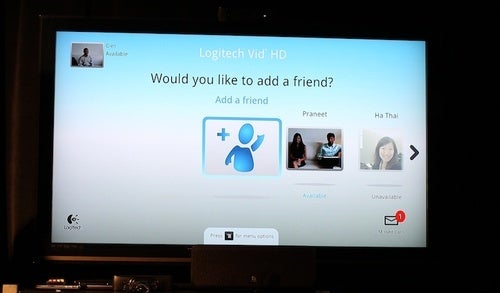 Video calling looks great–picture quality is very clear, and the dual-mic setup in the camera will hopefully ensure good audio quality. You can chat with other Logitech Revue users as well as anyone who has downloaded the Revue app for their computer.

Google TV looks really promising, and the Logitech Revue has a lot going for it. I do wonder whether the asking price will scare off potential customers–for the same $450, customers could buy a home theater PC and a webcam, which would be much more capable (though not as simple). Even the webcam-less package is pricey at $300. But Google TV is really something new, a way to bring the existing TV experience into the future, and I can’t wait to see what developers will do with the platform.