At first glance the just-announced Verizon Droid X by Motorola looks a ton like Sprint’s HTC EVO 4G, and at... 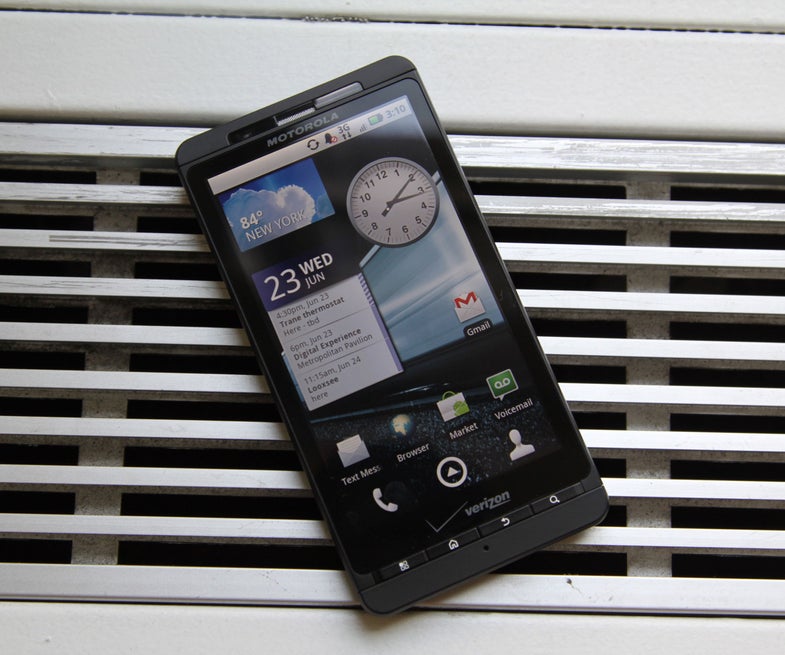 At first glance the just-announced Verizon Droid X by Motorola looks a ton like Sprint’s HTC EVO 4G, and at second glance the two handsets are more or less comparable (save for the EVO’s 4G connectivity, which doesn’t do most of the country any good, anyway).

Now, the specs: The Droid X has a massive, bright 4.3-inch touchscreen LCD, and an eight-megapixel still camera with dual-LED flash that’s also capable of 720p high-def video recording. On the inside is a one-gigahertz Texas Instruments processor (an upgrade from the original Droid‘s 550-megahertz, for sure). To compensate for the larger screen and zippy processor, Motorola has upped the battery to a 1570mAh model, which, they claim, will keep the battery life consistent with its older sibling at about one full day.

At launch the Droid X will be running Android 2.1, with an upgrade to 2.2 (aka FroYo) coming by the end of the summer. But the big story here is Flash; an upcoming upgrade from Adobe will mean full Flash support on all Web sites through the native Android browser, including embedded videos, games, and animation-heavy Web pages.

The phone uses some parts of Motorola’s Motoblur homescreen, but thankfully, reserves those updates to a few custom widgets for e-mail, Facebook, Twitter and the like, which you can choose to use — or, ya know, not use in favor of apps and widgets from the Android Market. Also pre-installed is a Blockbuster video-on-demand app, from which you can rent of buy titles to watch on the handset or on an HDTV connected via HDMI. And, in addition to the standard Android suite, Verizon has added Skype Mobile and NFL mobile.

The Droid X goes on sale July 15 for $199 (after a $100 mail-in rebate and two-year contract). Verizon is also so giddy to get these phones out there, that they’re offering an early upgrade to existing subscribers with contracts expiring anytime in 2010.

Check back soon to see how the Droid X fared in our PopSci.com review.