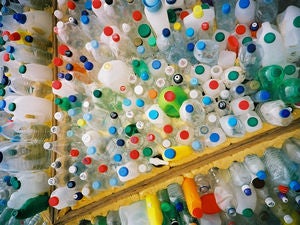 If you’ve bought a bottle of water in the past few years, you’ve probably spotted a “BPA-free” label or twenty. A chemical that leaks out of polycarbonate plastics, bisphenol A is determined “safe at the current levels occurring in food” by the Food and Drug Administration, but there’s evidence that it can disrupt our brain and endocrine systems at higher doses.

While BPA has been removed from baby bottles, sippy cups, and infant formula packaging, it is still present in plastic food containers, thermal papers, and can linings—and is detectable in over 90 percent of Americans.

The prevalence of this chemical has urged many researchers to investigate its mechanisms for interacting with the human body. A new study might provide additional evidence for how BPA could influence the developing brain in the womb.

BPA exposure before birth alters the way the brain deals signals of “hungry” or “full” later in life, according to the study in Endocrinology. The researchers found that when they fed pregnant mice low doses of BPA—lower than what FDA considers safe—they gave birth to pups with underdeveloped brain circuitry in areas related to satiety, or how much they want to eat.

Normally, at eight days after birth, a surge of leptin occurs in a baby mouse’s brain, helping set up the satiety circuitry in the hypothalamus. Leptin is a hormone that comes from fat cells, and it inhibits appetite when there’s no need for energy intake.

“Once you miss that critical period, you can’t restore it in adults,” says senior study author Alfonso Abizaid, a neuroscientist at Carleton University in Ottawa, Canada.

That’s exactly what happened in mice exposed to BPA before birth. They had no leptin surge at day eight, and had much less branching of neuronal fibers in their satiety circuitry as a result. What’s more, when researchers injected leptin into these mice in their adulthood, they did not eat less and lose weight as the control animals did—which suggests that they had permanently lost their ability to respond to leptin, the metabolic signal telling the brain how much fat is in the body.

Leptin has a similar function in humans, says Thomas Zoeller, an endocrinologist at the University of Massachusetts in Amherst, who was not involved in this study. “Children that have genetic defects in their leptin signaling system are absolutely obese. It’s a medical emergency that those children are identified and treated in some way.”

“So we know how the leptin system is [important] for humans. It’s not just the animals,” says Zoeller. “I don’t think we can say in this case that [mice] are not humans. [Mice] have very similar regulatory systems, and I think it’s an important paper.”

Having studied BPA in thyroid systems, Zoeller thinks this paper is asking the right question. “They are asking what BPA is doing to the way the brain controls body weight,” says Zoeller. “BPA doesn’t increase body weight per se. What it does is change the ways the brain understands metabolic signals.”

Another outside expert, Scott Belcher, a toxicologist at North Carolina State University, emphasizes that this study is a nice mechanism research, but we must not jump ahead of ourselves and conclude that BPA causes obesity.

“To me, this [study] does not raise any more concern,” says Belcher, because researchers have already known that BPA is changing some aspects of metabolism, which is a bad thing. “I wouldn’t go that far to say it leads to obesity,” says Belcher. He studies BPA’s effect in the heart, as part of the NIH-funded Consortium Linking Academic and Regulatory Insights on BPA Toxicity.

But should pregnant women worry about BPA’s effect on their babies’ brain at all?

For now, we can’t really be sure. But Abizaid cautions that pregnant women working in environments with higher exposure should be careful: “For example, if you are a mom at a supermarket, constantly handling these receipts made of thermal papers [that contain BPA],” he says.

Zoeller agrees that pregnant women and lactating women need to be cautious. “We live in a plastic society, and it’s not perfect,” says Zoeller. But there are simple things we can do to reduce exposure to BPA. Heating plastic can release the chemicals, so keeping tupperware out of the dishwasher and microwave can help.

Heating a frozen dinner in its plastic container for a few minutes won’t necessarily increase any risk. But Zoeller would rather play it safe with a paper plate. “I had no idea if I had microwaved it in the plastic [whether] I would have increased my exposure to BPA,” says Zoeller. “I am certain that I would have increased my exposure to chemicals that were in the plastic. I don’t know what they are; I don’t if [they had any] risk. But I could reduce that very simply. It took no more time.”

On the other hand, regulatory agencies could do more. Removing BPA from baby products is not going to solve the problem, since BPA can get to babies through the placenta and breast milk.

Right now it is not “crystal clear” how much BPA crosses the human placenta and how that affects the fetus at different points, says Thaddeus Schug, a program administrator at the National Institute of Environmental Health Sciences, which funds a variety of BPA research projects. Schug also says that BPA doses used in this mouse study, while technically within the levels considered safe, are also some 10-100 times higher than what we humans are normally exposed to. “I think we need more research to try to figure out exactly what chemicals [at] what doses might have an impact on human development and human metabolism,” says Schug.

More research is also needed for BPA substitutes in the plastics like BPS and BPF, according to Zoeller. Structurally similar to BPA, they could have similar actions as well, and we don’t know much about them yet.

“[Saying] something is BPA-free doesn’t mean they essentially get rid of the effect,” says Zoeller.

Besides more research, Schug points out that scientists and regulatory agencies could stand to know a little more about how companies are replacing BPA with other chemicals—to make sure what they are doing is “a green and consumer-friendly process.”

“There’s some trade secrets that manufacturers use. And they probably need to use [them] to maintain their patents and their ability to make money,” says Schug. “But I think there’s also the communication problem where [regulatory agencies] don’t communicate enough with them to find out what they are using and how they are using it.”

“It’s really [FDA’s and EPA’s] job to work with industry to figure out some of the questions, but we should be at the table too,” Schug speaks on behalf of the National Institute of Environmental Health Sciences. “Because we do the research that helps identify what some of those problem chemicals might be. It does require communications between industries [and] FDA, EPA and the NIH that does the research.”

Schug and his colleagues are making progress. For example, in collaboration with the FDA and the National Toxicology Program, the NIEHS recently developed the Consortium Linking Academic and Regulatory Insights on BPA Toxicity, or the CLARITY-BPA program, to conduct a complete guideline study on BPA.

“That was pretty helpful to have [different stakeholders] at the table and having them all working together to try to reach some consensus,” says Schug. “It wouldn’t be really easy to do something like that for an individual chemical again.”

The CLARITY-BPA program cost 32-million dollars. It includes 12 grantees doing different endpoint analysis in “metabolism, cancer, fertility, diseases, and more experimental types of the assessments where they looked at RNA level and epigenetics that aren’t normal components of a guideline study,” says Schug.

Zoeller has more to say about how to do BPA safety research. Resonating with the recent debate covered in Science, Zoeller says, “Regulatory agencies must acknowledge, appreciate and consider these kinds of study”—like this Endocrinology paper—when they evaluate the impact of artificial chemicals on human health. FDA and EPA should not only focus on “overt adverse effects,” says Zoeller, but also examine how a chemical might influence the brain and change the way the body functions later. “That’s what they should be doing.”

This post has been updated to clarify a statement from Schug.