Children sliding on laps are liable to break their legs. 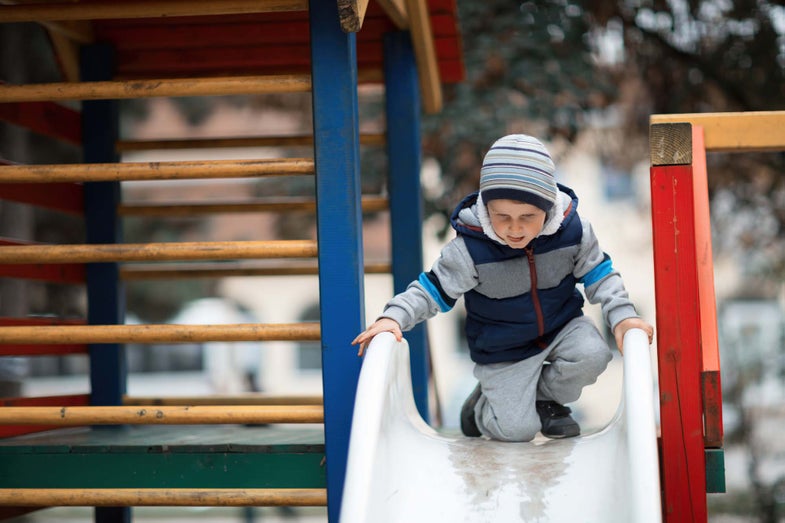 It’s a familiar sight on any playground: A parent placing their small child on their lap before they glide down the slide together. You can almost hear the tyke screaming with glee.

Parents often do this because slides can seem especially dangerous for small children struggling with basic coordination. A toddler is less likely to topple from such heights if she’s within a parent’s firm grasp. And slides can get as hot as 200 degrees on a sweltering summer day—it’s better that the parent’s bum take the brunt of the burn than a toddler’s delicate skin. The problem, according to research presented on Monday at the American Academy of Pediatrics National Conference & Exhibition in Chicago, is that parents are actually making slides even riskier for their kids.

Lead by Dr. Charles Jennissen, a clinical professor and pediatric emergency medicine staff physician at the University of Iowa Carver College of Medicine, the research found that placing children (especially infants and toddlers) on adult laps increases the risk of injury to their lower leg, including broken bones.

“I’ve seen a lot of these injuries throughout my career, and I hadn’t seen anybody talk about this issue,” says Jennissen.

So Jennissen scoured the National Electronic Injury Surveillance System (NEISS), which collects injury data from emergency departments across the United States. He and his colleagues found that an estimated 352,698 children under the age of six were injured on slides in the U.S. from 2002 to 2015. Injuries were most common among kids from 12-23 months of age, and the most common injury (36 percent of them) were lower leg fractures.

To tease that out that data, the researchers looked at the accompanying “narrative” (notes recounting the incident that led to the injury) from 600 cases. Of those, 94 percent involved lower leg injuries. This is important, because that’s not how a kid falling off a slide solo would usually get hurt. If a child tumbles while climbing a slide’s ladder, she’s likely to injure her head or face—or her arms, if she reaches out to break her fall. If the injury happens while the slide is in progress, hands and faces are still the most logical injury site. A kid whipping forward off of the end (or falling off the side edge mid-slide, if he’s really unlucky) is still likely to go down on his head or arms.

The fact that so many kids are getting lower leg injuries—and that those injuries seem to get less common as kids get older—suggests something else is at play.

Jennissen thinks that the most likely way for a child to injure their legs on a slide is for them to catch their feet along the edge. This, of course, also happens when kids go down slides by themselves. But when they’re sliding solo, they aren’t going fast enough or carrying enough body weight to hurt themselves. When they’re sitting on an adult’s lap and their foot gets caught, they have the added momentum of an adult body wrenching their tiny leg backwards.

“We think a lot of these lower extremity injuries are because they’re on the lap,” says Jennissen. “We don’t know that for sure, because the narrative doesn’t say that. But from my experience, and the data that suggests it, we think almost all of these are kids are on the lap.”

Jennissen isn’t arguing that you should never go down the slide with your kid—he admits that it’s fun and that he’s done it with his own kids—but he thinks adults should be aware of the risks.

“The safest thing is not to go down the slide with an infant or toddler on your lap,” says Jennissen. “But if they do so, parents really need to use extreme caution. You really need to make sure that you’re watching and controlling the child’s lower extremities so they don’t catch on the side of the slide.”