Go eat in the woods. You’re lost in the woods, days out from civilization, and your stash of granola has run low. How you strayed off the path—on a vision quest gone bad or while searching for your favorite bird—doesn’t matter. Soon you’ll need to find food.

But you won’t have to look far. All around your mud-spattered boots is a nutritious buffet just waiting to be plucked, cracked, and uprooted: wild edible plants.

Despite what many people believe, most vegetation in North American forests is safe to consume, according to Andrew Townesmith, a botanist and edible plant expert at the Missouri Botanical Garden. The challenge, he says, is finding plants that are both nutritious and tasty—especially when they’re uncooked.

“The majority of plants in your environment are edible,” Townesmith says. “But they may not taste good or provide much in the way of calories.” In other words, you have to be choosy if you want a decent meal.

Here’s how to find greenery that pleases your tongue and satisfies your hunger—and how to avoid their potentially-dangerous cousins.

Know what not to eat

As Susanne Collins wrote in that seminal survival guide, The Hunger Games, “Plants are tricky. Many are edible, but one false mouthful and you’re dead.”

Fine, that’s a bit of an exaggeration. But there are some plants you should be sure to avoid.

Don’t be fooled by leafy plants that look like familiar edibles, says Christopher Nyerges, author of Foraging Wild Edible Plants of North America. For example, a lot of wild plants look like Italian parsley, including hemlock—the plant that, in the form of a toxic tea, killed Greek philosopher Socrates.

“You don’t have to know a single poisonous plant,” he says. “You just have to know what you’re eating.” In other words, only bite into something if you recognize exactly what it is. 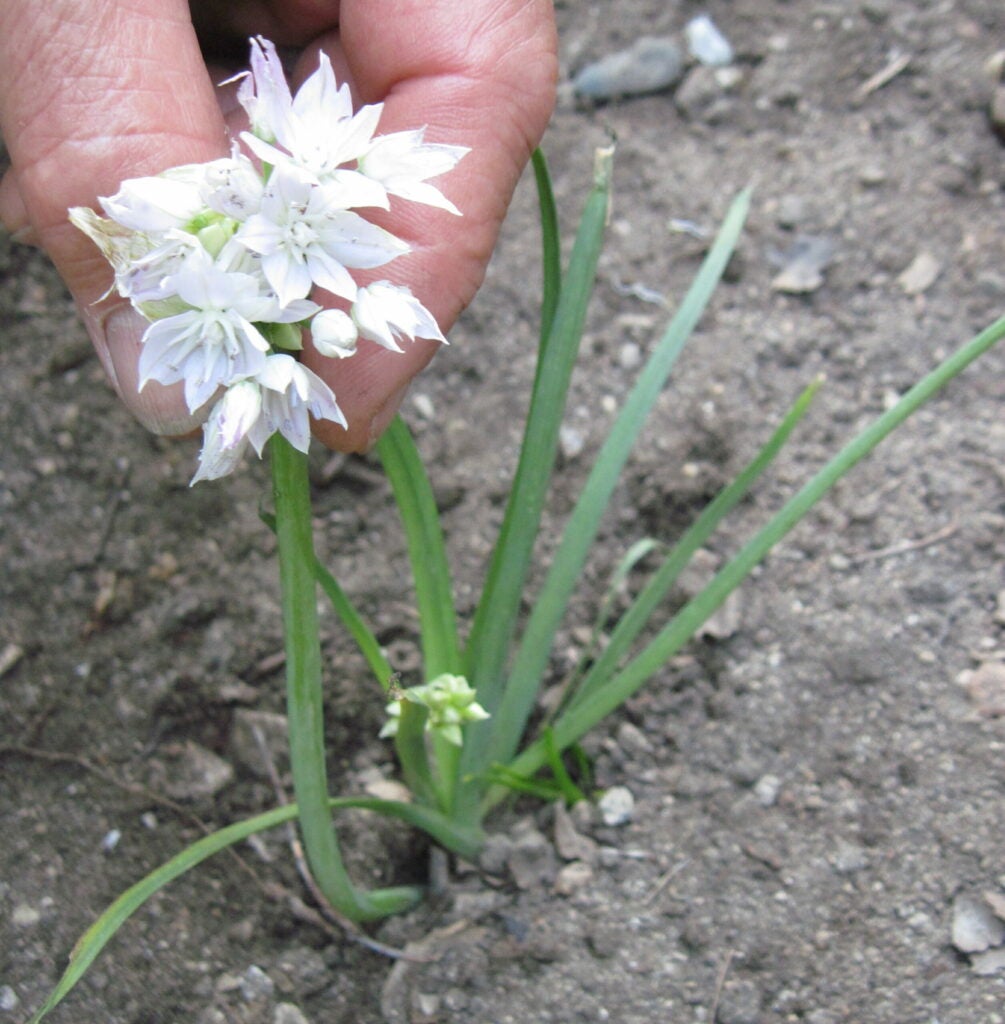 Don’t chomp into this weed unless it smells like an onion.

Nyerges recommends that you double-check a plant’s identity through smell. For example, loads of wild onions grow in forests across the country, and they make a great food source. But, he says, “If it doesn’t smell like an onion, don’t eat it.” (Your nose can also come in handy for sniffing out poisonous plants—avoid any non-almond that smells like almonds, as that could be a sign of poisonous cyanide.)

So what are the plants you should be looking out for? You might be surrounded by leaves, but as any vegetarian knows, it takes legions of lettuce to feel full. If your goal is survival, you should turn to fattier, more calorie-dense plant parts. Tree nuts, Townesmith says, are a great option—and they’re available in most North American woodlands.

If you’re east of the Great Plains, search for hickory nuts, considered one of the most calorie-dense wild plant foods. Produced by tall, deciduous hardwoods, these protein-packed snacks are hard to crack into: They have both an outer husk and an inner shell, which envelopes the brain-like nut meat. But it’s well worth your effort if you do, Townesmith says. They taste like pecans—in fact, pecans you buy at the supermarket come from a southern species of hickory—and you don’t need to cook or soak them before chowing down, Townesmith says. Just be sure the nut looks veiny, like a pecan. Like hickory nuts, poisonous buckeyes also have double-shells, but the meat looks very different—smooth and rounded. 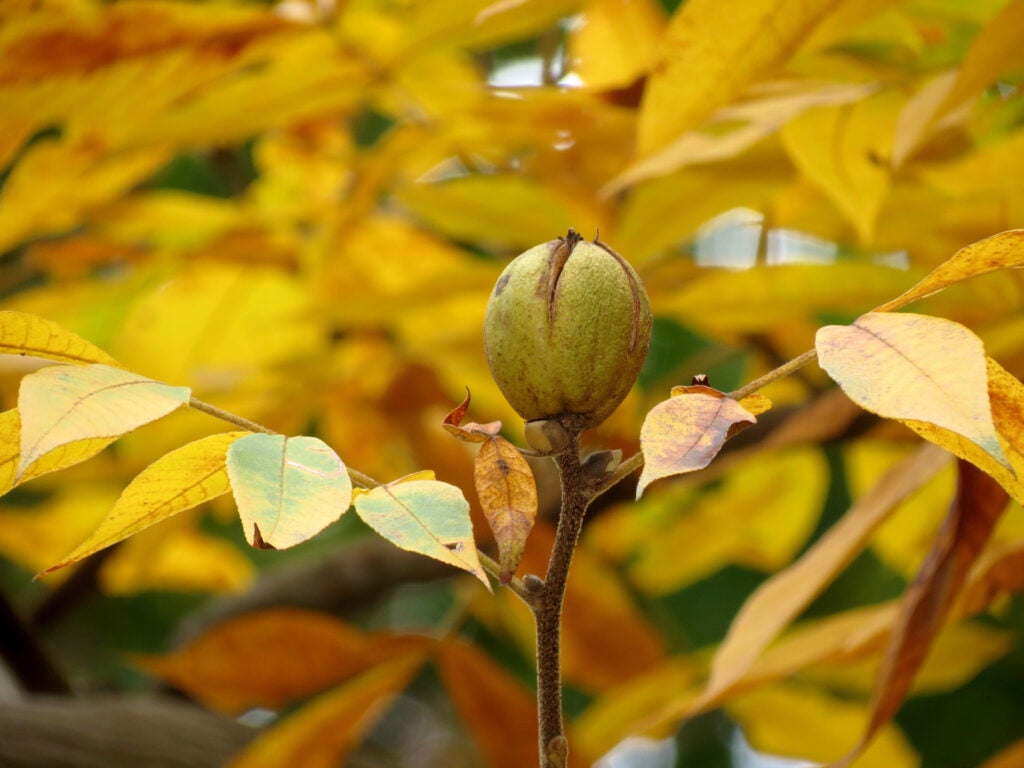 A protein-rich hickory nut makes a great snack—just don’t confuse it with a poisonous buckeye.

If you’re disoriented in the forests of the American southwest, pine nuts from the pinyon pine, a scrubby evergreen of the high desert, are also a great option, Townesmith says. Found inside pine cones—who knew?—these nuts are easy to harvest and taste like buttery kernels, ready to inspire any pesto. (Pine nuts in the supermarket are typically imported, but indigenous Americans, and some chefs, have been cooking with pinyon pine nuts for years).

Even the humble acorn is edible. “They were an important food source for Native Americans,” Townesmith says. But they need to be prepared. First, use a rock to separate the nuts from the shells. And then, assuming you don’t have a pot, use a piece of clothing—such as a sock, ideally a clean one—to submerge the nut meat in a stream for a couple of days. The rushing water gets rid of some of their tannic acid, which can cause stomach issues in high concentrations, and their bitter taste. (If you soak the nuts in a pot instead, be sure to change the water a few times, Townesmith says.)

For dessert, pair your foraged nuts with wild berries, another great source of calories. However, finding edible fruit is a bit trickier; some varieties can make you sick. According to Townesmith, there’s no good rule of thumb for distinguishing the good from the poisonous.

So to be safe, he says, stick to berries that you recognize with absolute certainty. For example, keep an eye out for blackberries, raspberries, and other “aggregate berries”—those named for their tightly-packed clusters of fruit. They’re delicious, and bountiful in many parts of the country. In the Pacific Northwest, it’s hard not to stumble into a bramble of Himalayan blackberries, which are an encroaching variety, so you’ll be curbing an invasive species while curbing your appetite. 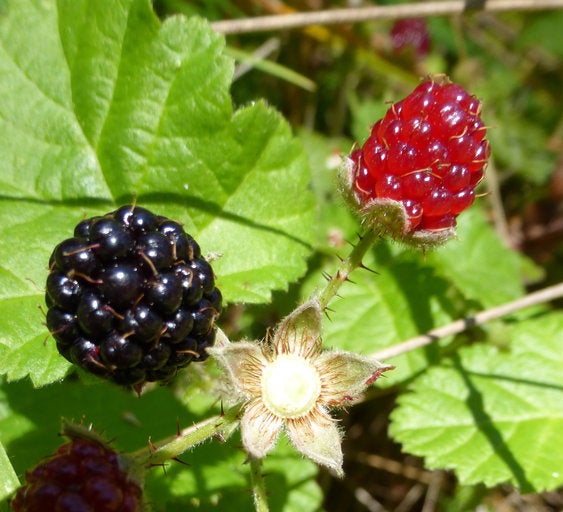 Blackberries, raspberries, and other so-called aggregate berries, which have tell-tale clusters, are easy to identify

Other recognizable fruits, such as elderberries (small purplish-black berries that form an umbrella-shaped cluster), are also widespread. Just be sure to avoid any white berry, Townesmith says, as these tend to be toxic. Also beware of fruits that look like blueberries or cherries—they may taste scrumptious, but both have deadly doppelgangers.

If you’re near a lake, river, or wetland, scan the surface for aquatic plants with leaves poking out of the water. These so-called emergent aquatics are nearly all edible, Townesmith says, and their roots are usually nutritious.

The familiar cattail, or bulrush, is a great go-to. You can easily distinguish these plants by their cigar-shaped “flower spikes,” and their roots are a good source of protein and carbs, although they’re highly fibrous, which makes them unappetizing when uncooked. (Pro-tip: If you want to toast them over a fire, then kindle your flame with the cattail’s dried-out flower spike.) 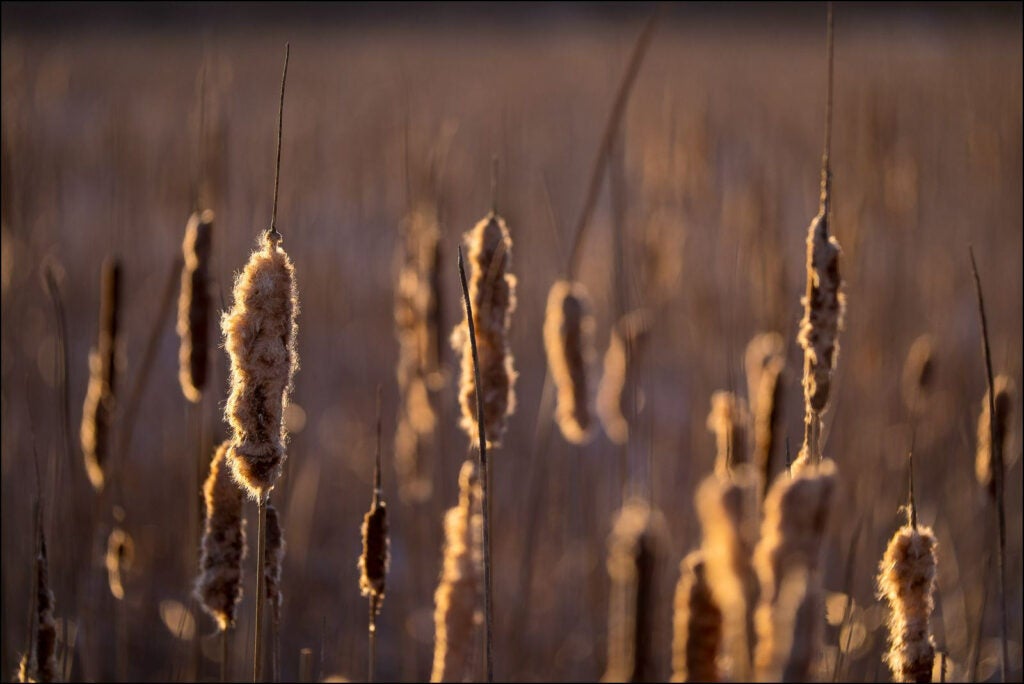 Then there’s the aquatic arrowhead. Less commonly known as “katniss”—yes, it’s the namesake of The Hunger Games heroine—you identify this plant by its large, arrowhead-shaped leaves. Its roots, nutritious underground stems called tubers, taste something like sweet potatoes, and they’re surprisingly easy to dig up.

“Stomp around in the mud, and as you loosen it up, the tubers will actually float,” Townesmith says.

When in doubt, try the universal edibility test

If you find nothing nearby that looks obviously safe to eat—or you spot an appetizing-looking plant but don’t feel sure it’s edible—you can always check it with the universal edibility test.

“It’s essentially taking small amounts of a plant, having increasing contact with it over enough time to see if any ill-effects develop,” Townesmith says.

Here’s a summary of how to perform the test, according to Backpacker. You’ll want to perform this trial separately for each part of the plant you want to eat, including the roots, leaves, and stem. 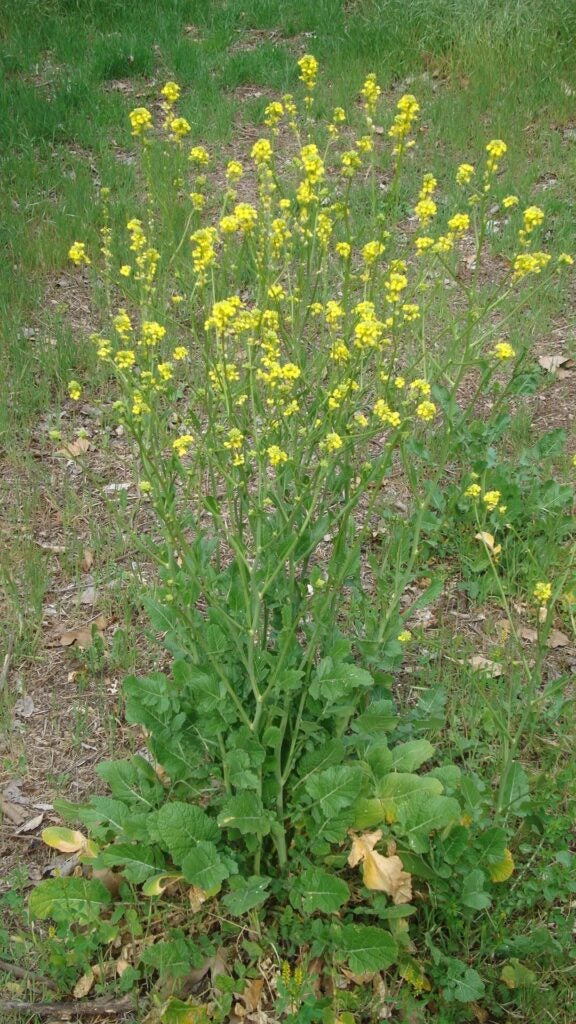 To identify plants like the wild mustard, you may need to consult a book on botany.

Though these tips may make the thought of getting lost in the woods less horrifying, they just scratch the surface of wild foraging. To level up, Nyerges says, learn some basic botany. This can teach you things like how to identify edible families like mustard by their floral characteristics. (“In any given area, there are about 50 different varieties of mustards,” Nyerges says.)

So read a book. Or take a class (Nyerges, co-founder of the School for Self Reliance, has been teaching foraging workshops in California for more than 40 years). If you do, then the next time you go wandering in the woods, you may be perfectly content to stay there.