Plus it has a real Terminator vibe 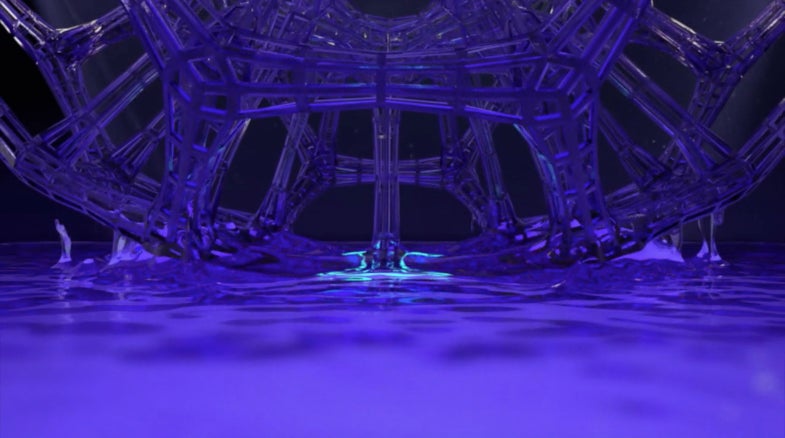 Rapid prototyping may soon get a whole lot more rapid, thanks to an entirely new method of 3D printing. Instead of taking hours to 3D-print something, it might soon take minutes.

The UNC-Chapel Hill researchers, who described their new process in the journal Science, named it CLIP for “continuous liquid interface production.” They argue their method confronts two of the most annoying aspects of 3D printing: waiting hours for a creation, and one with rough surfaces. CLIP, they claim, can print smooth, complex objects in a fraction of the time as existing systems, and using a wider variety of materials.

Existing 3D-printing methods that use liquid resin build objects layer-by-layer in a slow process: print a layer, cure it, replenish the resin supply, repeat. In the CLIP system, a projector displays successive, imperceptibly thin cross-sections of the object from below in ultraviolet light. This light hardens a layer of liquid just above the bottom of a pool of liquid resin. Meanwhile, a platform continuously lifts the forming object out of the resin.

The killer feature of a CLIP printer is the bottom of the pool: a window that lets oxygen as well as ultraviolet light pass through. Because oxygen blocks the curing process, the membrane effectively–and continuously–forms a “dead zone” of non-curable resin on the bottom. Yet the layer is only about as thin as few red blood cells. This lets ultraviolet light pass through and cure any low-oxygen resin sitting right above the dead zone. Presto: No resin sticks to the bottom, and printing goes faster because it’s not happening at the surface, where oxygen is present and slows things down. As the printer pulls up the forming object, suction feeds more low-oxygen resin toward the bottom. 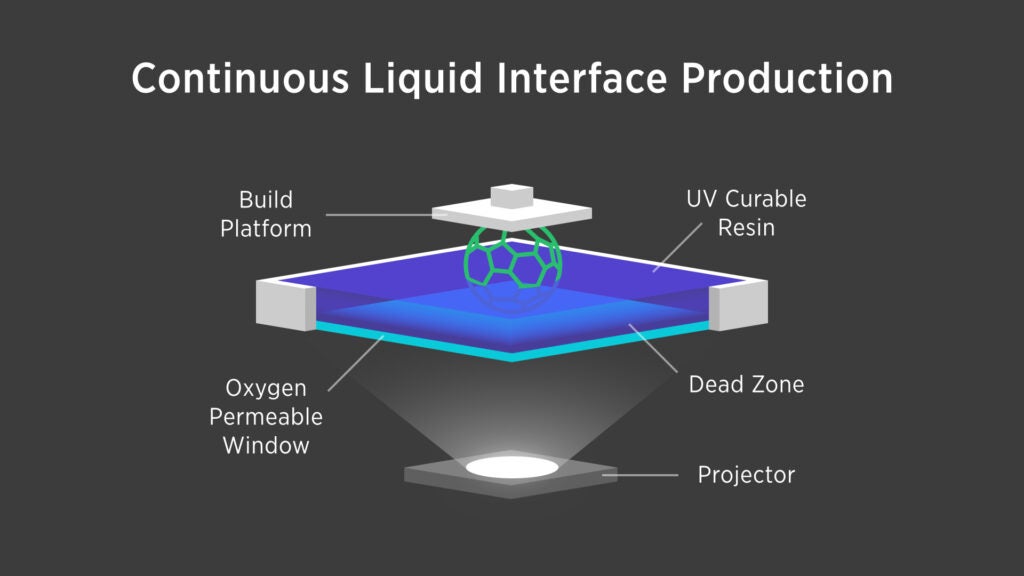 Drastically speeding up the curing process also makes for smoother 3D prints. Instead of waiting around for a single slice of a 3D object to cure, CLIP prints continuously, creating objects that rival injection-molded parts. CLIP’s makers also claim they can produce much finer parts–with features smaller than 20 microns (as thick as an acrylic fiber)–and potentially use elastomers as well as tissue-compatible biological materials, which most 3D printers can’t use. It also doesn’t hurt that the CLIP process looks really cool–the creators even say they were inspired by Terminator 2‘s iconic liquid metal T-1000.

But at the end of the day, it’s really the speed that sets this new process apart. CLIP’s creators say objects can be produced 25 to 100 times faster than old-school methods.

The researchers are leveraging the patent-pending process into a startup called Carbon3D, Inc., which plans to produce a commercial version of a CLIP printer by the end of the year. No word yet on its cost or specifications, but we expect the first batch of Carbon 3D devices will go to startups and research institutions that have a great need for high-quality rapid prototyping–and a lot of cash sitting around.