Navigate back to civilization. 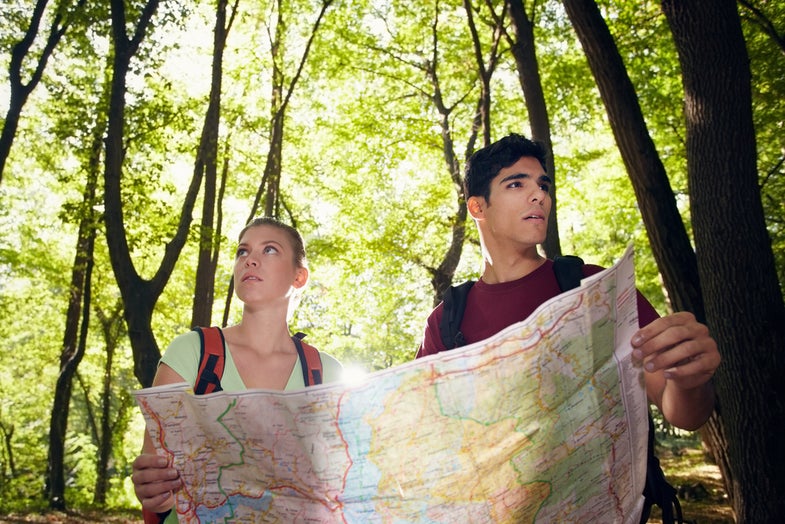 Today, we live in a world where GPS systems, digital maps, and other navigation apps are all available on our smartphones. Few of us just walk straight into the woods without a phone, a personal GPS, or another navigation tool. But phones run on batteries, and batteries can die faster than we realize. If you get lost off-trail without a phone or a compass, and you literally can’t find north, we have a few tricks to help you navigate back to civilization

Before we begin, remember the basics of outdoor safety: Rescue teams will find you more easily if you stay in one place, preferably close to your last known location or your planned destination. Unless you’re facing a serious emergency, such as a natural disaster, stay put and don’t leave the trail! For the sake of this guide, however, let’s assume you have deserted the beaten path. What do you do?

When you find yourself well off a trail, but not in the middle of completely unfamiliar terrain, you have to answer two questions: Which way is downhill, in this particular area? And where is the nearest water source? Humans overwhelmingly live in valleys, and on (or near) supplies of fresh water. So if you head downhill, and follow any H2O you find, you should eventually see signs of people, provided you don’t stumble onto a trail first.

If you’ve explored the area before, keep an eye out for familiar sights—you may be surprised how quickly spotting a distinctive rock or tree can restore your bearings.

Another option: Climb high and look for signs of human habitation. For example, even in dense forest, you should be able to spot gaps in the tree line due to roads, power cables, train tracks, and other paths people carve through the woods. Head toward these breaks to find a way out. At night, scan the horizon for artificial light sources, such as fires and streetlights, then walk toward the glow of light pollution.

Finally, assuming you’re lost in an area humans tend to frequent, look for the marks we leave on the landscape. Trail blazes, tire tracks, and other features can lead you to civilization.

Even if you brought a map, it won’t do you much good if you don’t have your bearings. Fortunately, the sun can point you in a general direction.

However, this isn’t the most precise method. We’re told, “The sun rises in the east and sets in the west,” but a more accurate saying is “The sun rises roughly east-southeast and sets roughly west-southwest, although the exact bearings will depend on the specific time of year.” There’s also the hemisphere flip to consider. In the Northern Hemisphere, the sun sits in the southern part of the sky, while in the Southern Hemisphere, it appears in the North. Furthermore, as the Earth orbits the sun, our star moves across the sky. All this is to say, don’t just look at the rising light and think, “East.”

Despite its quirks, though, you can still use the sun to get your bearings. First, find a straight stick about three feet long, and stand it up vertically in a flat patch. Next, mark the top of the stick’s shadow on the ground, wait ten to fifteen minutes, and mark the top of the shadow again. The first mark should be to the west of the second. So, if you orient your body so the first impression (west) is to your left and the second (east) is to your right, you should be facing north.

What if you don’t have a flat patch of dirt, or a straight stick that’s long enough? Sunlight can still help you navigate, but in a much rougher fashion. In the Northern Hemisphere, the southern sides of objects generally receive more direct sun than the northern ones. The reverse is true in the Southern Hemisphere. As a result, if you’re hiking above the equator, the southern face of a hill will probably have more vegetation than the northern one; plants that prefer cooler, damper environments, like moss, are more likely to grow on the northern sides of trees; and puddles on the ground may grow smaller as they move north to south. That said, puddles and plants can vary for many reasons that have nothing to do with the sun: In thick woods, for example, moss has more than enough shade to grow anywhere it wants. So you may want to save this trick as the navigation method of last resort.

When you’re out after dark, the sky can still point you in the right direction.

The moon moves around the sky even more often than the sun does, but we have a trick you can use to find (roughly) north. And it works in both hemispheres.

Remember, moonlight is just reflected sunlight, so the bright part of the moon faces the sun, and the dark side faces away from it. That means it can offer a rough line from east to west. When the moon is a crescent, look at the two horns and draw a line connecting them. Extend this line down to the horizon. The point where it hits the ground gives you an approximation of due north.

In the Northern Hemisphere, you can also find north by picking out Polaris, the North Star, which sits at the very tip of the Little Dipper’s handle. Drop straight down from Polaris to the horizon, and that spot should be about north. However, especially in a stressful scenario, this technique isn’t exactly precise. 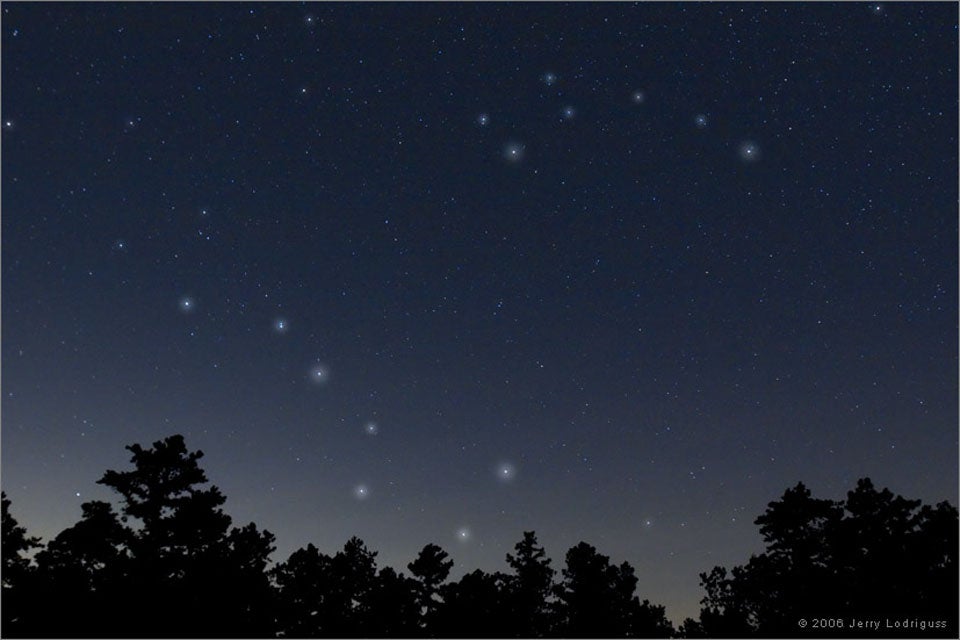 Find the Big Dipper (left), look up to locate the Little Dipper (right), then focus on the star at the tip of the smaller constellation’s handle. This is Polaris, the North Star.

If you can’t find Polaris, try this instead: Grab two sticks of different lengths. Then look for the brightest star you can see and line up the sticks with your body so the light shines in a straight line from the top of the longer stick to the top of the shorter one, right into your eye. Wait a few minutes, and then look again, using the same sight line. If the light shifted upwards, then you’re looking to the east. If it moved down, you’re facing west. A rightward shift suggests you’re pointed south and a leftward one north. This works because stars, like our sun, rise roughly in in the east and set roughly in the west.

In the end, none of these techniques would be necessary if you brought more than just your phone on this wilderness trip. Even if you’re going ultralight backpacking, you should carry a few basic tools, including a compass and a non-battery-reliant way to call for help—think a flare or a signal mirror. That way, if you get lost, you can stay put, as proper safety protocols dictate. A rescue team always begins looking at your last known location, so stick as close to that point as you can.

Still, say you do wind up lost without tools. These navigation methods will all work best if you’ve previously practiced them in a safe situation. So the next time you go hiking with equipment, try out these skills and use your navigation tools to get a sense of how precise they are.

Even if you never have to use them, these abilities will give you a greater appreciation of the world around you. They can teach you why trees have more leaves on one side, how and why the stars move in the sky, and why your town’s founders built it where they did. We’re lucky enough not to need these skills on a day-to-day basis. Instead, we can use them to learn how humans navigated in the past, and how the world still works today.