You can't block it and you probably shouldn't try. 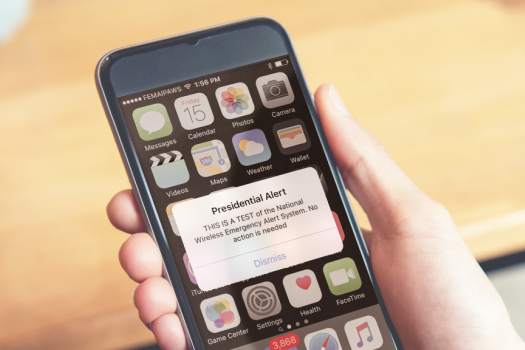 This afternoon at 2:18 p.m., your smartphone—regardless of carrier or settings—will notify you with an emergency alert. The intentionally-alarming message is a test of a new system called the Integrated Public Alert and Warning system, which is part of the Wireless Emergency Alert system. And no, you can’t get out of it. FEMA and the FCC are cooperating to distribute the message. And no, it will not have an actual message from the president. Here’s what you need to know.

You can’t block the message

This Presidential Alert, as it’s known, closely resembles an Amber Alert or an emergency message from the National Weather Service. It’s a jarring sound with a standard text box on your phone. This new IPAW message is different, however, because you can’t opt out of it. If you have an iPhone, you can head into your Notification settings, scroll to the bottom of the list, and checkboxes for turning off Amber and weather alerts.

Turning these off will not prevent the Presidential Alert from reaching your phone today or in the future.

You won’t get the message if your phone is not connected to a cellular network (so Airplane mode can eschew the message) or you could just turn your phone off. Other than that, if you have a current- or recent-generation smartphone that operates on one of the major carriers—and even most smaller companies—expect the buzz at 2:18 p.m. EDT, or up to 30 minutes thereafter.

If you do try to block it, be sure to turn your alerts back on after so you don’t miss out on weather notifications.

The test was originally scheduled for September

The original test for this system was scheduled for September 20, but Hurricane Florence pushed it back to today.

The system has been in the works since 2006

In 2006, Congress passed the Warning, Alert, and Response Network act that rose from the tragedy of Hurricane Katrina. IPAWS hopes to emphasize that this is a last-resort-style alert that indicates a direct threat of danger to citizens, hence its unblockable nature.

The authority for the president to use private sector communication tech to reach citizens, however, traces all the way back to the Communications Act of 1934.

These of tests have happened before

There have been three previous national tests of the EAS alert system for TV and radio, one in 2011, one in 2016, and one in 2017. This is the first national test for the WEA wireless alert. FEMA typically schedules it in September, which is its National Preparedness Month. Legally, this kind of test has to happen at least once every three years.

Local governments have used the WEA system more than 40,000 times since 2012 according to the FCC.

Here’s what the alert will say and sound like

The alarm sound is the familiar emergency tone and a buzz from the vibration. The noise will sound twice. The text will read, “THIS IS A TEST of the National Wireless Emergency Alert System. No action is needed.”

The alert will also appear on TV and radio

Along with the smartphone notification, IPAW will also run the alert on television and radio at 2:20 p.m. EDT.