Why NASA is sending a dust-scanning spectrometer to the ISS

The color of Earth's dust storms shape the climate, but we don’t know how. 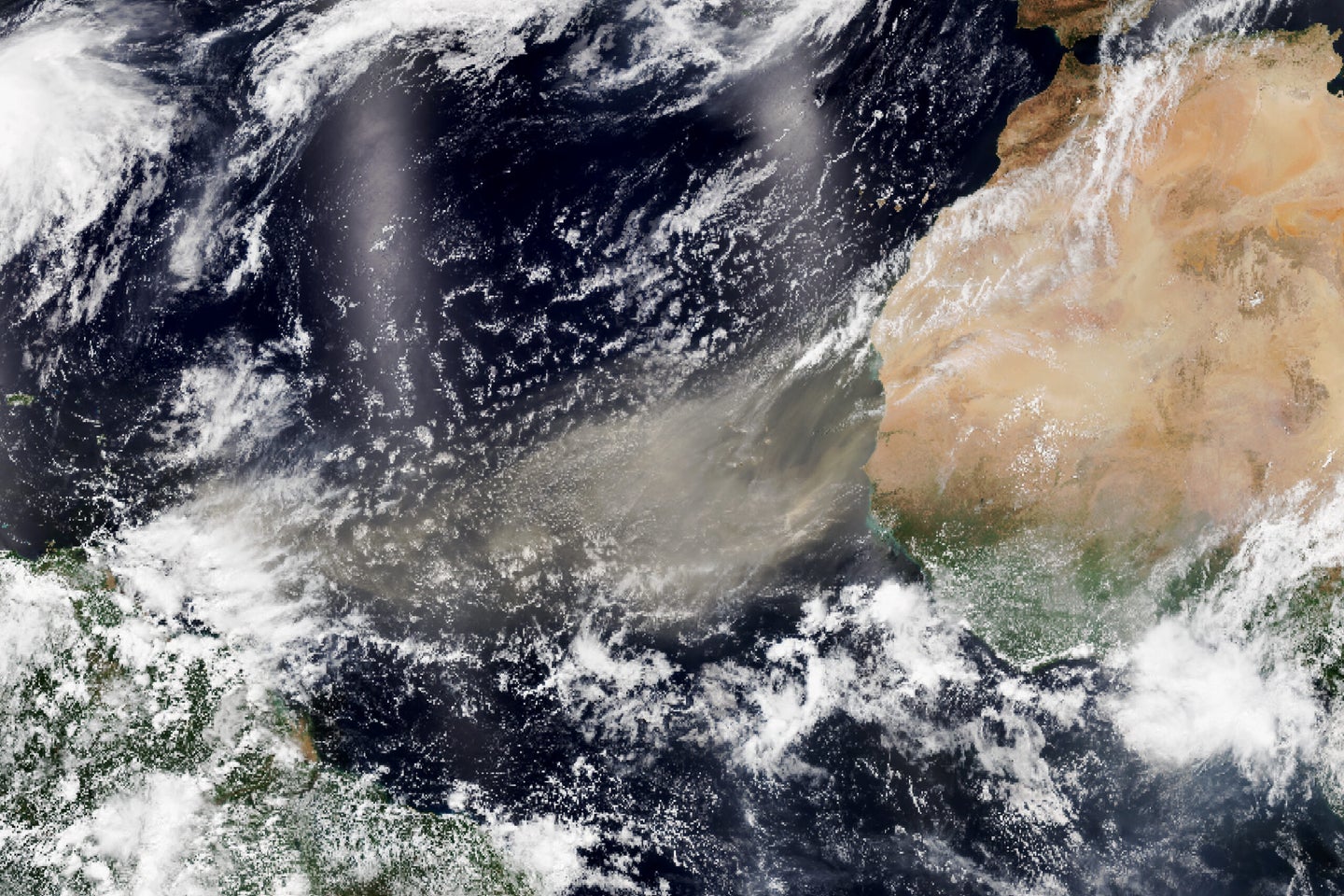 A plume of dust blows off of the Sahara Desert earlier this summer. NASA Earth Observatory
SHARE

When NASA launched its International Space Station resupply mission Thursday evening, the rocket carried instruments not just to study life in space, or the far-away stars, but to point back toward Earth. Among them is a set of ultra-sensitive light sensors designed to study the properties of swirls of dust in our atmosphere.

Atmospheric dust is a powerful, but not fully understood force in Earth’s nutrient cycles. Much like how water evaporates, forms clouds, and rains down, dust has its own patterns. Dust is constantly swept up from the world’s deserts, and when it settles, it fertilizes the Amazon rainforest, feeds explosions of marine life in the deep ocean, and warms up snow on California’s mountains.

All that dust changes the climate. Light-colored sediment can reflect heat back into space, while dark, iron-rich dust soaks up heat.  When a plume of Saharan dust traveled over the southern United States this summer, it tinted the sky orange, a lot like the haze from wildfire smoke. But the cumulative result of dust’s effect is a mystery.

When EMIT’s new sensors are installed on the ISS and ready within a few weeks, they’ll send back more than a billion measurements, which will give climate scientists their first comprehensive look at the planet’s dust cycle. These data may refine the essential tools researchers use to understand our planet: The Intergovernmental Panel on Climate Change believes that the unknown impacts of dust are responsible for differences between climate models and reality.

In a follow-up interview with Popular Science, Green explained how the sensors will work.

Right now, when scientists want to study atmospheric grit, they must rely on fairly rough tools. Satellites may capture a few snapshots of a sandstorm, but they can’t take a global picture. Modelers use a simplified view of dust, too. Many climate models assume that all dust—whether from the chalky salt flats of Utah or the ochre Sahara—is yellow, soaking up only part of the sun’s energy.

In 2015, a team at Cornell University tried to tabulate dust by melding two sets of existing data. On the one hand, there’s a database of 5,000 soil samples, analyzed for their mineral content; and on the other, a global atlas of soil produced by the United Nations’ Food and Agriculture Organization that categorized dirt solely on its color and texture. The idea was that, ideally, mineralogists could match dust’s color and texture with the actual minerals in the dirt. “It’s, I would argue, kind of qualitative, but they needed to start somewhere,” Green says.

This turned out to be an imperfect  approximation of what’s actually in the air. For one thing, most of the 5,000 samples were gathered from farmland, not the deserts actually responsible for the dust. For another, it turns out to be very hard to know what’s in soil just based on its shape and shade. But when they compared the predictions about dust composition to real-world dust samples, “they found it didn’t agree with measurements,” Green says. “So we really don’t know the minerals on the surface.”

EMIT will directly measure the dry, dusty places of the world using spectroscopy, a technique that uses the light bouncing off surfaces to understand their molecular guts.

As the ISS orbits the planet, EMIT will point a telescope at Earth’s surface. The light that comes in will pass through a narrow slit, and then be refracted into all its constituent colors—EMIT’s sensors can detect 12,410 different bands of color.

[Related: The ISS gets an extension to 2030 to wrap up unfinished business.]

“Rocks are made of minerals, minerals are different molecules by and large, and those molecules interact differently with light,” Green says. Each mineral carries a different spectral fingerprint. The spectrometer won’t measure atmospheric dust directly—when all the dust is floating in the atmosphere, it jumbles the light. Instead, the machine will focus on the ground, giving climate modelers enough information to reconstruct the dust clouds above.

After correcting for the effects of the atmosphere and vegetation, EMIT can detect the gritty building blocks of each 645-square-foot patch it scans.

It should take less than a year to get a complete picture of the world’s deserts, which will refine global climate models. But once that’s done, EMIT’s spectrometers could be turned to new observations.

Similar or identical spectrometers placed on airplanes have been used  to study fire risk in North American forests, biodiversity in the Peruvian rainforest, sources of plastic pollution, methane plumes, and the presence of rare earth elements. “It’s now taking this to space,” Green says, where watching dust in the wind is just the start.