To understand fossils, scientists are baking their own 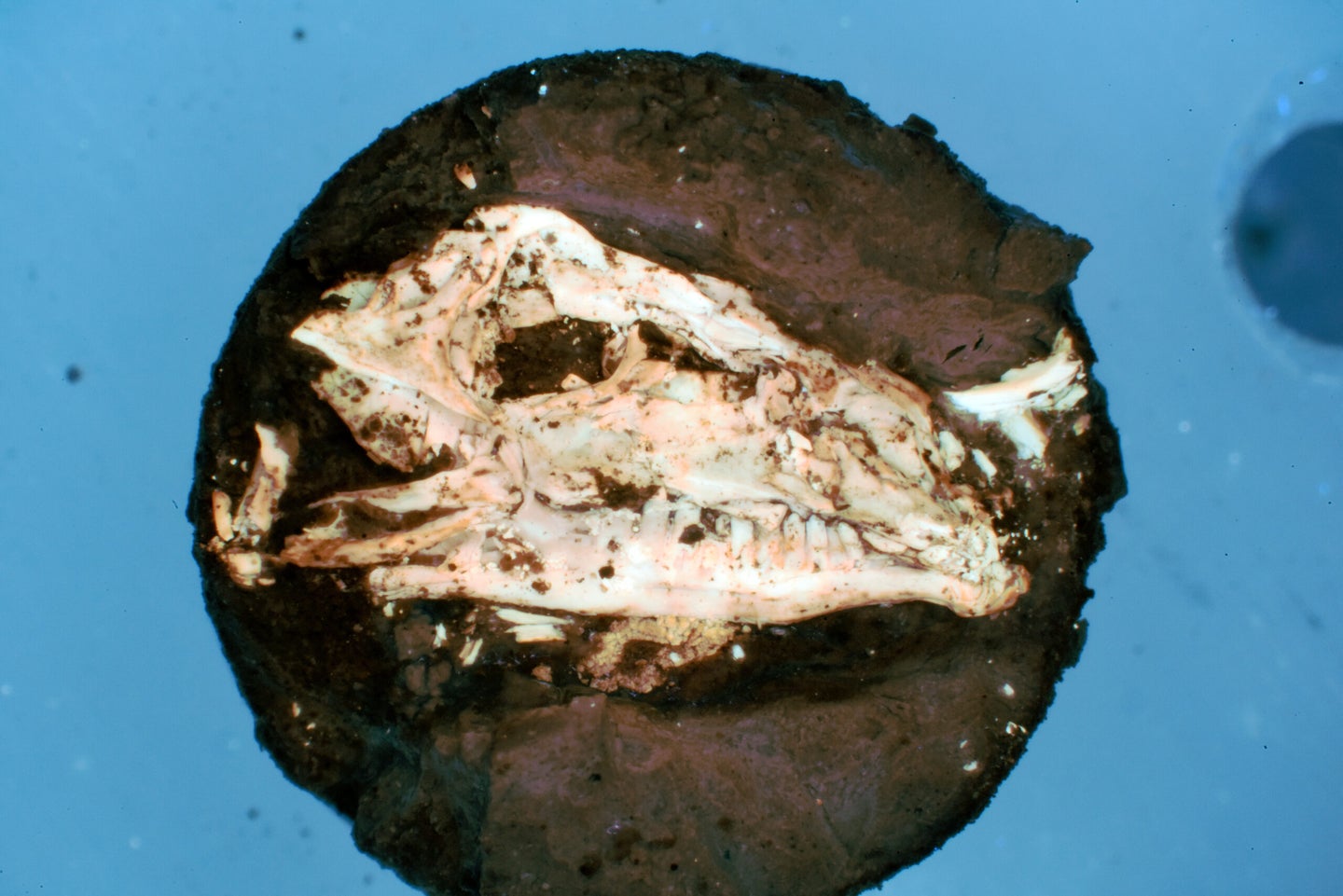 You’ll need an organism—preferably one with hard bones or a shell. Add fine-grained sediment and rapid burial and in 10,000 years or so, you’ll be well on your way to a deliciously durable fossil.

It’s a cooking project that can only take place in Earth’s test kitchen, and the baking time is admittedly long. But what if there were a quicker way—think microwave instead of slow cooker? A group of paleontologists think they’ve discovered a way that upends tradition and could give others in the field new insights into the way things fossilize. They published a paper on their method today in the journal Paleontology.

Taphonomy, or the study of the fossilization process, has been part of paleontology since the 1950s, when the term was coined by Ivan Yefremov, a Soviet scientist who won the Stalin prize—the USSR’s answer to the Nobel—for his work.

“Basically it’s about the process of death and disintegration,” explains Ronald Martin, a paleontologist at the University of Delaware who literally wrote the book on taphonomy.

Paleontologists aren’t the only ones who care about the discipline—it’s used by archaeologists, forensics experts and others to help understand how organisms die and are preserved. They use those insights to do things like figure out what kinds of animals or habitats are overrepresented in the fossil record as well as to understand time scales, climate change, and other nuances that wouldn’t be clear without an idea of how something got from living creature to fossil in the first place.

Typically, paleontologists use nature itself to figure out how fossils are made. “Some of it is pretty ingenious,” says Martin. In 1993, for example, a nationwide group of paleontologists banded together to create the Shelf and Slope Experimental Taphonomy Initiative. The long-term project involves burying a variety of marine species beneath the Gulf of Mexico and the waters of the Bahamas, then periodically visiting and studying them to observe how they’ve decayed over the years.

Another group created an atlas of invertebrate decay, sticking a variety of dead animals in water for up to a year and logging the changes that befell each creature. Others head to the lab to try to speed up the process. At the Laboratory of Experimental Taphonomy at Madrid’s National Museum of Natural Sciences, for instance, paleontologists can simulate the effects of everything from rain to pollution and climatic cycles.

These experiments yield important insights into how fossilization works, but they have their limits. Many happen within closed containers that make it hard to figure out what’s going on inside; most take place without the existence of, say, predators or earthquakes or any of the myriad things that can change fossilization. Researchers have to decide whether they care more about the early stages of fossilization or “maturation,” during which rock changes from sediment to sedimentary rock with the help of temperature, pressure, and other factors.

And then there’s the issue of time; Though some experimental methods can nudge the process ahead, there’s nothing like ten or more millennia to make a fossil.

For the less patient, there’s a new option: “bake” fossils by packing the work of tens of thousands of years into a 24-hour period.

Field Museum researcher Evan Saitta and his colleagues call their method “sediment-encased maturation,” and it involves pressing samples into clay tablets which are then baked in an oven at 3500 psi—about the pressure of a professional-grade power washer, and roughly equivalent to the pressure of rock in the shallow parts of Earth’s crust, where fossils are found. The result looks and acts like a real-life fossil. They tested the method on feathers, lizards, and leaves.

The researchers think they can use their method to compare what kinds of materials can survive fossilization, identify structures found in actual fossils, and better understand how soft tissues like skin respond to fossilization. By testing different variables using the process, paleontologists could possibly learn to identify what temperature or gases contributed to a real-life fossil’s formation.

“Our experimental method is like a cheat sheet,” says Saitta, who is the study’s lead author, in a release. “If we use this to find out what kinds of biomolecules can withstand the pressure and heat of fossilization, then we know what to look for in real fossils.”

Fake fossils may make it speedier to figure out how things fossilize, but they won’t take the guesswork out of paleontology—or replace the frisson of finding the real deal out in the wild. Still, it’s another tool to help reconstruct what really happened in the wild pressure cooker that is Earth…one faux fossil at a time.