‘Black Panther’ Has The Coolest Tech In The Marvel Universe

We talked to the designer of Marvel's most technologically advanced nation 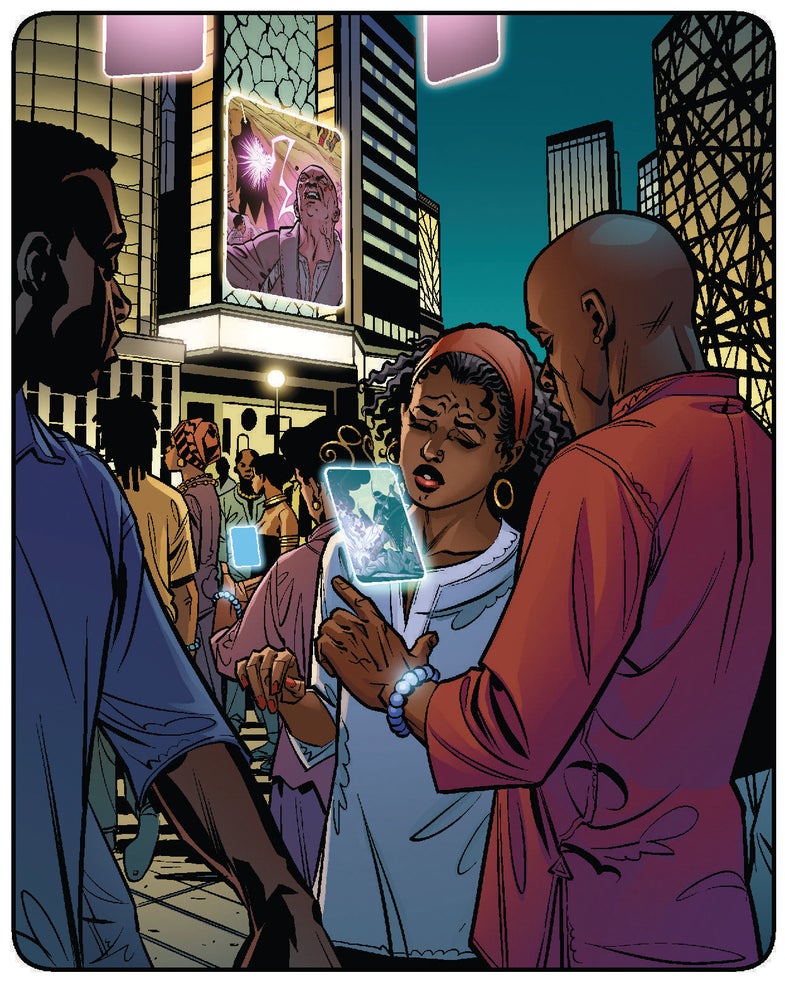 In a world where flying iron men and shield-wielding captains engage in Civil War, Black Panther is most concerned with his people in Wakanda: a fictional East African nation with the most advanced technology in the Marvel universe. The first black superhero in a mainstream comic, the Marvel hero also appears in the latest Captain America movie—which offers a good look at the Black Panther himself, T’Challa, and his vibranium suit. The same metal used to make Cap’s physics-bending shield is one of Wakanda’s most popular exports. But the actual cool tech Wakandans keep for themselves—that’s what Brian Stelfreeze gets to create.

While Ta-Nehisi Coates handles writing Black Panther, artist Brian Stelfreeze is responsible for, not just drawing, but building the world of Wakanda. Those bird-looking ships? That’s him. Those hologram bracelets are him too. Marvel’s Black Panther film isn’t due out until 2018, but more visuals are set to release when issue 2 of the new comic drops tomorrow. Here’s how he created what we know of Wakanda in 2016. 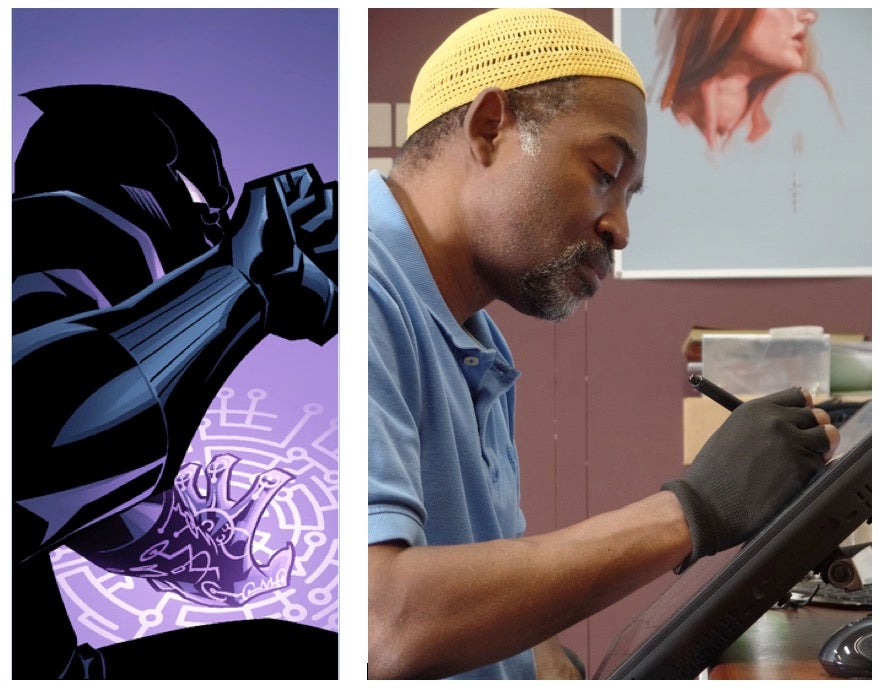 Stelfreeze is the artist behind 2016’s Black Panther

Popular Science: There’s a lot of great tech in the world of Wakanda. Where does your inspiration for it come from?

Brian Stelfreeze: I think when you’re being creative, you still attach it to reality somehow. I grew up in a small town in coastal South Carolina. Where I’m from, the people are known as Gullah people. They’re some of the first freed slaves that lived on their own, without being attached to the rest of the U.S.

They kind of developed their own culture, so they do things a little bit different. Growing up in that area and going to the rest of the world, I noticed things were just slightly different. Seeing my first pile driver in real life I thought, “Oh, that’s like what my uncle built out of tree stumps to dig wells.” So I thought, “what if that happened over thousands of years? How could technology evolve?”

So how does that compare to T’Challa and the people of Wakanda?

I think of Wakandan technology as organic technology. Most of their tech mimics nature because it comes from nature. Wakanda was a tremendously warring nation, with a very feudal time early on. But after a while proper borders were established, which ushered in a time of peace. Peace time shifted concerns from war to agriculture, from agriculture to early days of knife and spear-building to developing exotic materials. Rather than coming from industry, Wakandan tech came from agricultural needs—using organic tech to build machines.

But a lot of this stuff is in the background. Like the flying vehicles you see in Wakanda designed like a flying animal. And even when readers may not directly see it, I want them to feel it.

Is the use of vibranium in Wakanda an example of this?

It is. When T’Challa gets punched or attacked, his suit is storing all that energy.

In the Marvel universe, vibranium has always been this material that absorbs kinetic energy. And any tiny bit of physics knowledge will tell you that that’s really non-Newtonian. You can’t just absorb energy, you’ve gotta change it into something else. So to the rest of the world, they only know vibranium as something that can absorb energy. But to the Wakandan scientists, they not only know that vibranium will take in energy, but they know how to get the energy back out.

Such as when we see Black Panther use his energy wave attack.

His suit has the technology to then recall that energy. And when it recalls it, it converts it back into kinetic energy and a little bit of waste product—photon energy, that ends up in the light show that you see.

And all vibranium has this ability. When T’Challa is in his homeland, he can pull the energy of the vibranium from the ground. And it’s constantly taking in energy—from footsteps to earthquakes. It gives him a little bit extra power when home, but also goes with the metaphor that he is grounded in Wakanda. 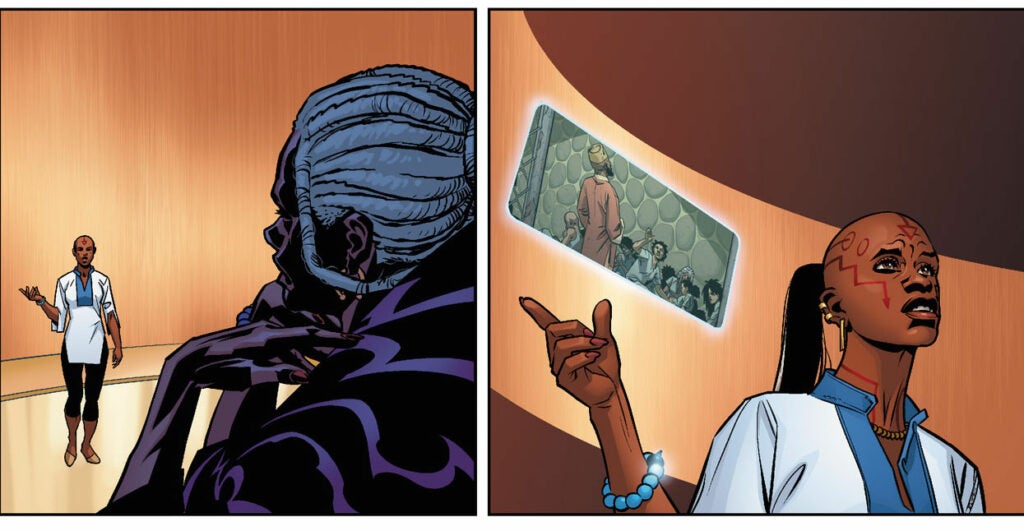 Are the holographic bracelets we see based in similar tech?

We refer to those as kimoyo beads. They’re similar to the kimoyo tech that’s been established in Black Panther before and they do tap into the vibranium of Wakanda. We won’t show many Wakandan exports of technology in the comic because much of what we see simply can’t work outside the country. There’s just power in the ground of Wakanda all the time.

So the kimoyo beads work well in Wakanda, but, when you leave, it’s like taking out the battery.

Almost like a cell phone when you find yourself off the grid. What was the motivation behind the holographic screens and changing the kimoyo tech in this way?

The bracelet started off as a way to tell some of the backstory without doing a flashback. Instead of cutting away from the actual story, we’d have someone pull up a screen of what they’re talking about instead. A bead act as a cell phone, but from there we thought about the other beads: what if another bead is their personal data, holding medical records and such. What if a separate bead is GPS? If you work a certain job, you’d get a bead tied to the machines of that workplace.

It sounds very reminiscent of modular devices, like Project Ara.

Right. And younger folks, who are involved in all sorts of stuff, would have a bracelet full of beads. Where are some of the older people who are more chilled out, even retired, would only have a few beads on their bracelet.

But the design of the kimoyo beads comes from the real world. A lot of black folk wear stuff like that. A thing that’s in everyone’s hands as you walk down the street is the industrial way. I thought, “Why isn’t is just an invisible piece of technology? Why not make it the bracelet everyone is wearing?”

What other aspects of the real world, from African culture, can readers spot in this new telling of Black Panther?

One of the things I try to do with Wakanda is make the country all of Africa—pulling from different cultures, and even eras, all over Africa. The Wakandan soldiers, what would be police, are influenced by Zulu warriors and Masai warriors. Even doing little things, like most of the rooms are round or curved. I want everything to feel like we’re in Africa.

But it also pulls from black culture. In terms of the black hair, the various haircuts will have everyone see black people that they recognize. I want to keep the facial structure and the lines, to where you can say, “Yup, these are definitely black people.” 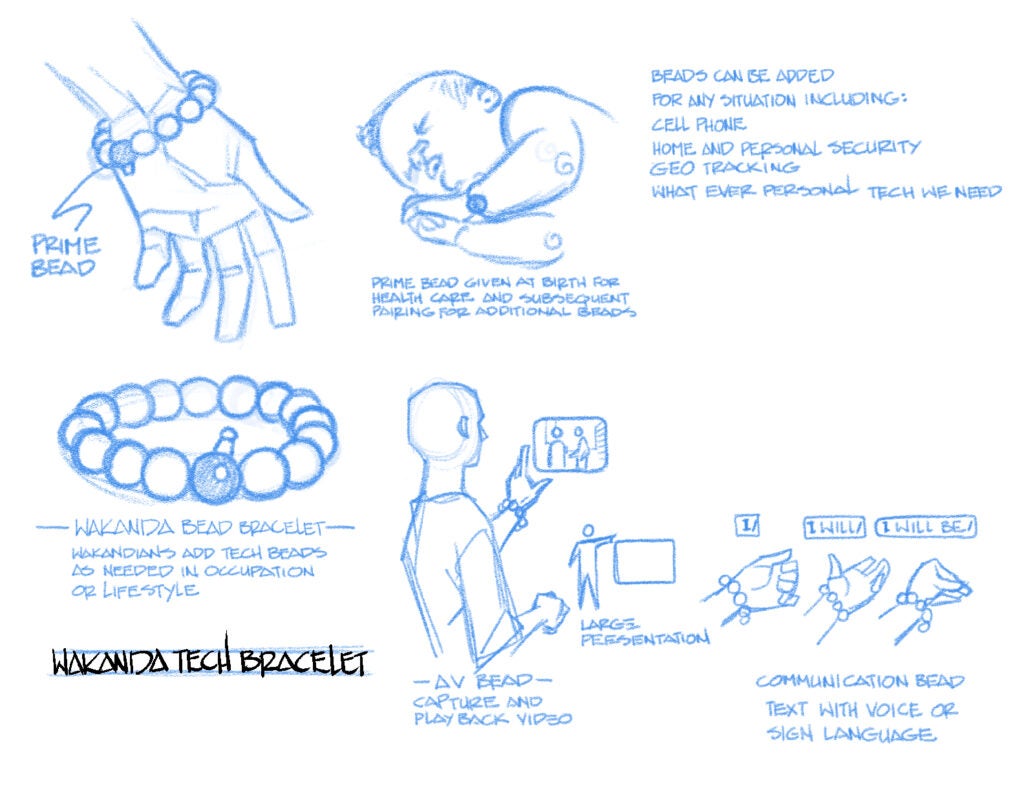 And that extends to the tech too?

Right. Even something from our world like sign language. The kimoyo beads, because they’re around your wrist, pay attention to your hand. So if you want to silently communicate or text someone you can just use sign language. We’ll see a lot of this in the comics. But much of the tech will be inferred—there’s going to be some tech that we’re going to see that will be in the background only. To me that makes it real.