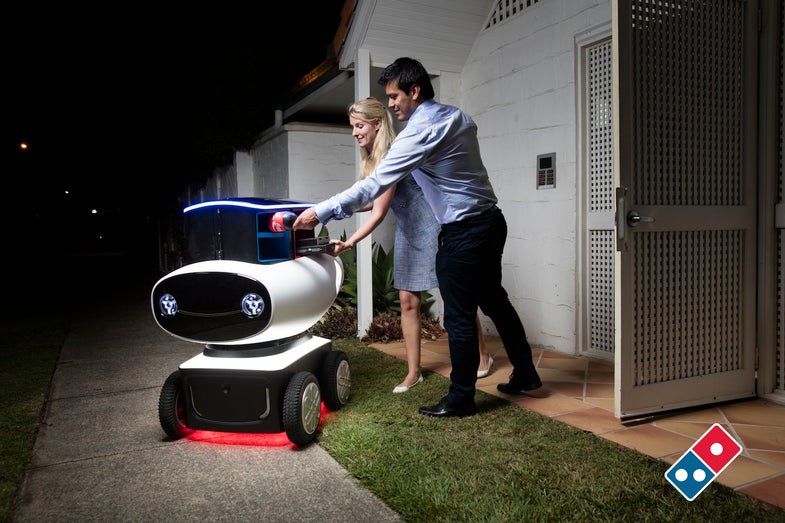 Domino’s, a pizza company that courts a reputation for dabbling in technological innovation, has debuted its idea for a delivery-person-free future.

The last time I ordered pizza from Domino’s, I had to interact with many humans to finally have it delivered to my home. I placed the order online–no human contact, great! But, when the Pizza Tracker informed me that my pizza had been delivered, it most definitely had not been. My only recourse was to call the humans that work at my local Domino’s. And call again when my pizza still failed to appear. After a two-hour saga of confusing phone calls, my lukewarm pizza arrived, but I ate it ravenously all the same.

While it’s clearly not quite there yet, Domino’s has been working on removing the humans from its pizza buying experience for a while. In 2014, the company announced its “virtual ordering assistant” DOM, which lets you talk to a dad-joke-telling digital voice on the phone to order your pie. And in 2015, Domino’s Easy Ordermade it possible for hungry customers to order by tweeting a pizza emoji.

That brings us to DRU, Domino’s Robotic Unit. This month, the company tested out the delivery bot in Australia on small restricted paths. According to Lifehacker Australia, DRU can travel at a little more than 12 miles per hour, so it’s not suited for the highway.

DRU was developed by Marathon Robotics, a company that made autonomous robots for the Australian Defense Force. In a press release, Marathon said “We are proud to also be part of this world-first innovation in pizza-delivery technology and its potential for saving lives, saving time, and moving goods more efficiently.”

(Saving lives? Yes, my pizza delivery was late, but I was in no mortal danger. And Domino’s says incidents in which drivers are endangered happen “infrequently.” But who’d say no to a safer pizza delivery experience?)

Right now, DRU is still just a prototype, but the four-wheeled bot can currently find its way to doorsteps using LIDAR, and use sensors to avoid obstacles. It keeps your order at just the right temperature with two compartments that separate steamy pizza from cold drinks. Those compartments are also equipped with locks and cameras to ensure your precious pies don’t get stolen while en route. Though, I must say, I’m not convinced that a little robot would be very effective at navigating the streets of Brooklyn to deliver my pizza in a timely manner. Without further development, it’s unlikely to put many delivery people out of business.