Drones Are Now Delivering Packages In One Chinese City

Like robot courier pigeons, with about the same carrying capacity 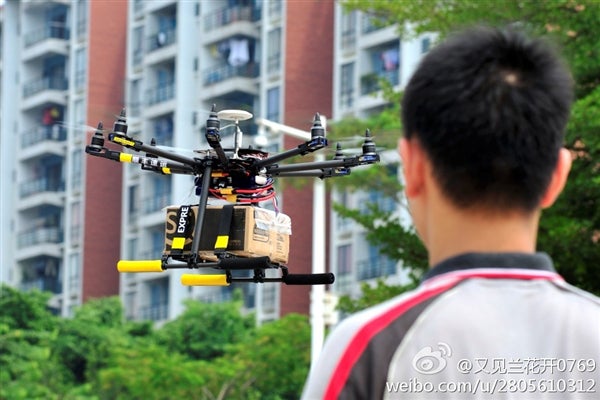 After a user on the Chinese social media site Weibo posted about seeing flying robots with the SF Express logo, the delivery company admitted that it has begun trials of package-delivery drones in the city of Dongguan in southeast China.

This isn’t the first drone delivery news out of China, but unlike InCake’s attempted drone cake delivery service in Shanghai, the SF Express operation has received the go-ahead from local police.

Because they travel by air, drones are an attractive option for delivering small packages in crowded urban areas with badly congested roads. The Dongguan metro area, with a population of almost 8 million and a strong, export-driven economy, is an ideal test site for such a program.

The drones themselves are octorotors (picture a cartoon drawing of a squashed spider) with eight limbs extending from a central body. According to local news sites, each drone can carry up to 6.6 pounds and fly at an elevation of about 330 feet. It’s unknown how far the battery-powered drone can fly.

Lighter than 7 pounds is not a lot of cargo; the drone can’t even carry a complete paperback set of Harry Potter (that’s a standard unit of weight, right?) so I wouldn’t expect it to replace 18 wheelers just yet. But that is a lot of elevation! The drone could deliver a couple paperbacks almost to the top of a 33-story building.

Express delivery by drone, even of small packages and over short distances, means this is much less of a gimmick than other drone delivery services, like a Domino’s pizza delivery in England or a dry cleaner’s drone in Philadelphia. When could the U.S. start testing services like this? At the earliest, 2015, when the Federal Aviation Administration approves six states as test sites for drones.

Here’s hoping they come stateside soon. Free shipping is cool, but I’d be way more excited about a package delivered onto my balcony by a robot.