A Working Tetris Game Inside A Pumpkin

Carving a face into a pumpkin isn't nearly as awesome as this. 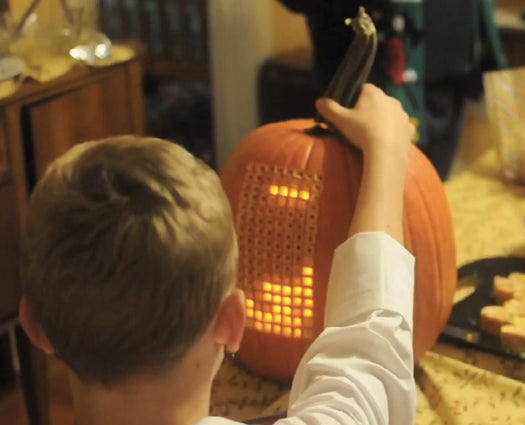 Nathan Pryor at HaHa Bird has essentially won Halloween. Rather than carving a boring spooky face for trick-or-treaters to ignore, he made the gourd into a Tetris machine. There’s a grid of holes on the facade and LED lights inside. Players can control the game using the stem of the pumpkin, which functions as a joystick. Waste not, want not.

But the best part is that you can make one too with a little soldering, coding, drilling ,and carving. There’s nothing we like more than spending hours on a cool, tech-y DIY project that is only appropriate for one day out of the year. Unfortunately there probably isn’t enough time to do all of this before costumed children arrive at your doorstep. Halloween 2013, anyone?