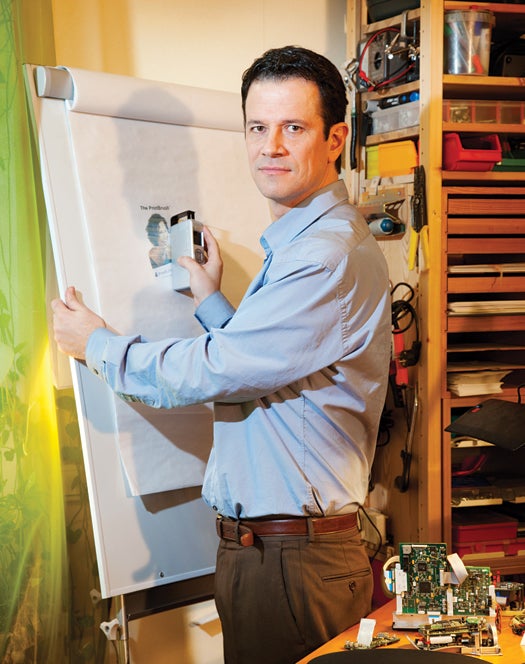 In 2000, one of Europe’s largest rubber-stamp companies approached Alex Breton, an engineer from Stockholm, Sweden, for product ideas. Instead of dreaming up a new stamp, he designed the PrintBrush, an 8.8-ounce handheld gadget that uses inkjets, computer-mouse-like optics and navigation software to print uploaded images and text on any flat surface, including paper, plastic, wood and even fabric.

Conventional printers move paper through the machine in large part because it’s the only way to accurately track the position of the page relative to the print head. With such constraints, Breton realized, a printer could never be narrower than its paper—unless the inkjets had an entirely new way to navigate across the page.

That’s the allure of the PrintBrush. The device operates more like a computer mouse than a printer. Laser sensors, originally developed by Philips, track the printer’s movement and pinpoint its position. The sensors continuously emit infrared laser beams toward the paper’s surface as the user moves the device over it. They then measure the scattering of the reflected beams, which—along with the beams’ power fluctuations—determines the device’s velocity and direction of motion. Even small amounts of reflected laser light are enough to track motion, so the lasers work on almost any type of surface. 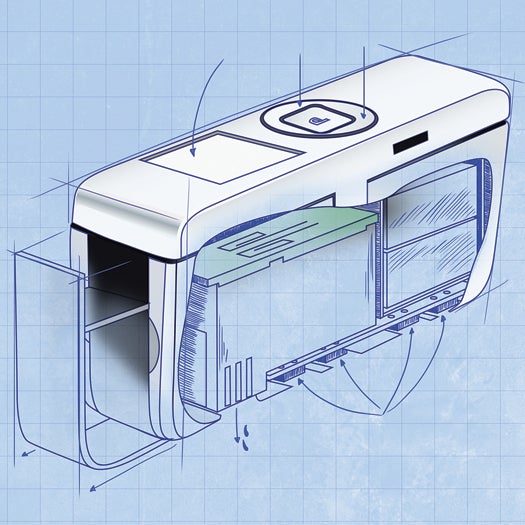 As the user slides the printbrush across a sheet of paper, optical sensors track the velocity and direction of the printer relative to the page. a controller matches the location coordinates to a pixel map of the document or image and runs algorithms to predict which pixel to print next.

It took less than two years to develop the first prototype but nearly a decade more to get it right. With each new version, Breton and the team of optics engineers and other experts he recruited refined the navigation system, most recently replacing LED-based sensors with the lasers. They also added color, which required writing a set of algorithms to quickly formulate the ink combinations needed to produce the appearance of 16 million different shades.

By early next year, a PrintBrush with a built-in camera for instant photo printing will hit the market and officially claim the title of world’s smallest printer. Breton will release an even smaller model, the A4, shortly thereafter.