Johnny Lee wanted a telepresence robot, but he didn’t want to pay thousands of dollars for one. So he did... 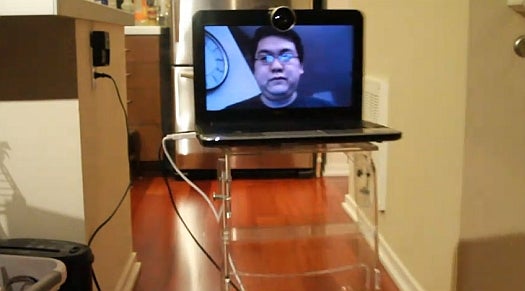 Johnny Lee wanted a telepresence robot, but he didn’t want to pay thousands of dollars for one. So he did what any good hacker would do: bought a netbook, bought a roomba-like iRobot, and built a simple one himself for about $500.

The setup is simple with only two real components: the iRobot Create robot and a simple camera-equipped Windows 7 netbook, both costing about $250. Running software he wrote in (it’s available for free on his site) and using a USB connector available from iRobot, he patched the two together so the netbook and the robot can be controlled remotely from another computer (for video chat he simply uses Skype).

The only real DIY project here is constructing a stand to raise the netbook up to seated level, should you prefer your ‘bot to have a higher-than-cat’s-eye view (the understanding here is that if you can’t fashion a simple stand, you probably shouldn’t be trying to build a telepresence robot). Lee has even outlined an advanced modification that allows you to park your remote bot in a wireless charging station so you won’t need another person to unplug your remote bot from the wall.

It’s not exactly an Anybots QB, but it’s not $15,000 dollars either. And we’re willing to bet you could still send it out for coffee, just like the QB. Get the step-by-step from Lee below.