They said it couldn’t be done, but Oskar van Deventer—a longtime puzzle maker living in the Netherlands—created it anyhow: a... 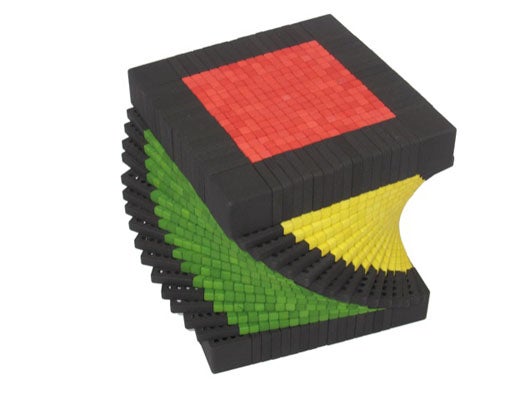 They said it couldn’t be done, but Oskar van Deventer—a longtime puzzle maker living in the Netherlands—created it anyhow: a 17-by-17-by-17 tile Rubik’s cube that, as far as we know, is an unofficial world record for the world’s largest and most complex Rubik’s puzzle.

Van Deventer, an electrical engineer by trade, didn’t carve out the 1,539 constituent pieces by hand, but rather tapped the increasing availability of 3-D printing technology to manufacture his high-tech puzzle. That’s not to say it was easy; the design itself took more than 60 hours (and three tries) before a successful prototype was printed at Shapeways, an online commercial provider of rapid prototyping technologies. Dyeing the individual pieces required another 10 hours.

The finished product, titled “Over the Top,” is 5.5 inches and 17 tiles long along each side when assembled, blowing the current record of 12-by-12-by-12 out of the water (though, as noted above, this world record is currently unofficial). Want to give it a shot? You can print one out yourself at Shapeways for a cool $2,000. Judging from the looks of it, that comes out to about $1 per hour you’ll spend trying to solve it.