It’s like something out of a science fiction novel or a Harry Potter book. Engineers from Duke University have constructed a device that can “cloak” items placed on a mirror surface.

First designed in 2006, the new version of the device is a more sophisticated and complicated design that can cloak a wider variety of waves.

To create the new device, the researchers developed a new set of mathematical algorithms which, in turn, are used to engineer artificially structured “metamaterials” that have properties not found in natural materials. The metamaterials are what form the cloaking structures, which bend electromagnetic waves, like light, around an object, so it appears the object is no longer there.

We see ordinary objects, like the flat surface above, when light bounces off them to our eyes.

To test the new device, the researchers aimed a beam of microwaves at a bump on a flat mirror surface. Normally, this bump would cause the beams to scatter, as seen here.

But in the experiment, the metamaterial cloaking structure was able to bend the waves around the object, removing any sign of scattered beams, so that the reflected image resembles that of the flat plane, as if the bump were not there.

To think of it another way, the device acts like the mirages created on the road in the summer.

“You see what looks like water hovering over the road, but it is in reality a reflection from the sky,” says David Smith, William Bevan Professor of electrical and computer engineering at Duke. “In that example, the mirage you see is cloaking the road below. In effect, we are creating an engineered mirage with this latest cloak design.”

While the cloaking device is still in its beginning stages, Smith believes the cloaks show promise and could one day serve as protective shields or improve wireless communications by making signal-blocking obstacles “disappear.”

While its uses may be practical, the idea of cloaking objects seems like something straight out of a Star Trek episode. Could H.G. Wells’ Invisible Man become a reality? “I still think it is a distant concept, but this latest structure does show clearly there is a potential for cloaking — in the science fiction sense — to become science fact at some point,” says Smith. “Maybe we wouldn’t have something as simple and as all-encompassing as a Harry Potter cloak, but in certain contexts or situations cloaking effects do seem to have some reality.” 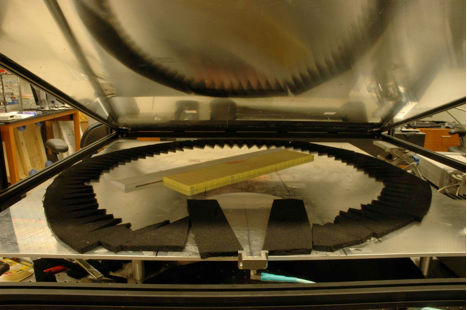