How To Build a Bomb-Proof Blast Shield for your Camera 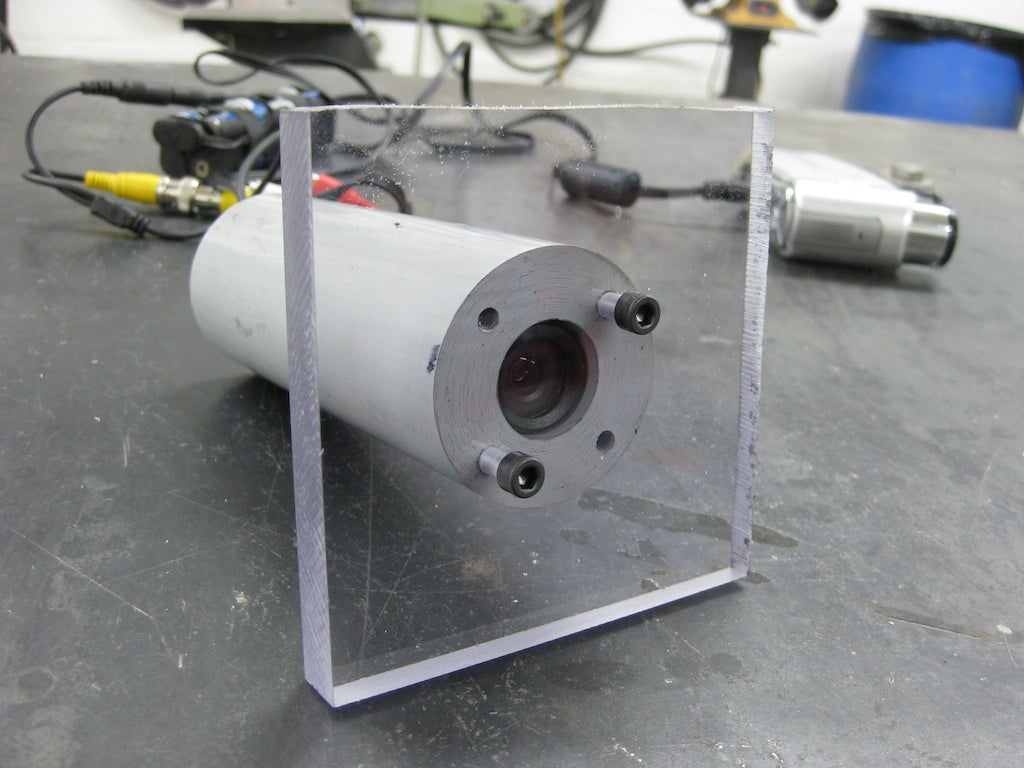 To start, I did some research on the impact resistance of different plastics and found that PVC-II is good and fairly cheap. Polycarbonate has good impact resistance and is nearly optically clear (this is similar to what you see at the gas station in the ghetto). I sourced both of these materials from McMaster-Carr, though any local plastic supplier should also carry them. Using the PVC for the housing and polycarbonate for the face, I built a very simple protective case for a lipstick camera. There are plenty of ways to vary this design, but the average home builder should have no problem making one of these.

You will need a lathe to build your camera enclosure exactly as I did. Starting with the 4″ rod of 2″ OD solid PVC, I machined a 0.900″ ID, which fits my particular helmet camera. If you do not have access to a lathe, you should be able to improvise something with 1″ PVC electrical conduit. If you are using the conduit, I recommend cutting off about 4″ of the larger, nesting part at one end and glueing it over 4″ of the rest of the conduit. This doubles the wall thickness, providing more protection and more material to tap in the holes that attach the face plate.

Once the PVC protective cylinder is complete, drill and tap two holes (I used 10-24 size hardware for everything) in the face of the cylinder for the faceplate. Drill and tap one more hole in the side of the PVC cylinder all the way through to the center for the setscrew that retains the camera. When tapping the PVC, be ginger. Back up the tap frequently and clear out the PVC material that has filled in the low spots of the tap. If you don’t, this material will tear out the threads as you turn the tap. I’d recommend practicing on some scrap PVC before you build the camera housing.

Prepping the face plate is simply a matter of cutting the polycarbonate to size and drilling two holes. I used a 4″ x 4″ square for mine and cut it with a port-a-band (portable bandsaw). You could use a jig saw, but be careful to avoid cracking the plastic. Drill two holes to match those you made on the cylinder and use socket head cap screws to attach this face plate to the body of the camera housing.

The lipstick camera will need a DVR (Digital Video Recorder) to record the footage and a battery pack to power it. I bought a PVC electrical junction box for this. It was cheap and it gave me the chance to test PVC conduit material in a blast before I recommended it. The waterproof seal in the lid is great. Removing the screws every time you want to get at the DVR is not so great. The next time I use this camera rig, I’ll probably look at a small Pelican case to replace that conduit box. Whatever you use will need a hole cut in it to pass the wires from the lipstick camera. In order of decreasing expense, you could use bulkhead fittings, rubber grommets, tape, or nothing to seal the opening where the wires pass through.

In building my camera housing, I wanted something fairly small that I could put directly in harm’s way. At some point, I will probably turn the 4″ x 4″ square polycarbonate face plate down to a 2″ diameter circle to further decrease the size of this rig.

If size is not the main concern, however, there are other options to consider for your camera housing. Consider putting a polycarbonate window in a pelican case or even the cheap PVC electrical junction boxes. Be sure to seal between that window and the original box with a sealant such as RTV silicone that can withstand high temperatures. A camera housing of this design could also protect larger cameras than just the lipstick camera used here.

My cohort Gocke and I tried hard to destroy this enclosure. Though we did at one point set it on fire, it is still completely intact. The protection it provides the camera is impressive. In the video below, you will see some of the incredible footage this camera rig can provide.