Travel through time on history’s most ridiculous rides

Someone had to build it and try it. 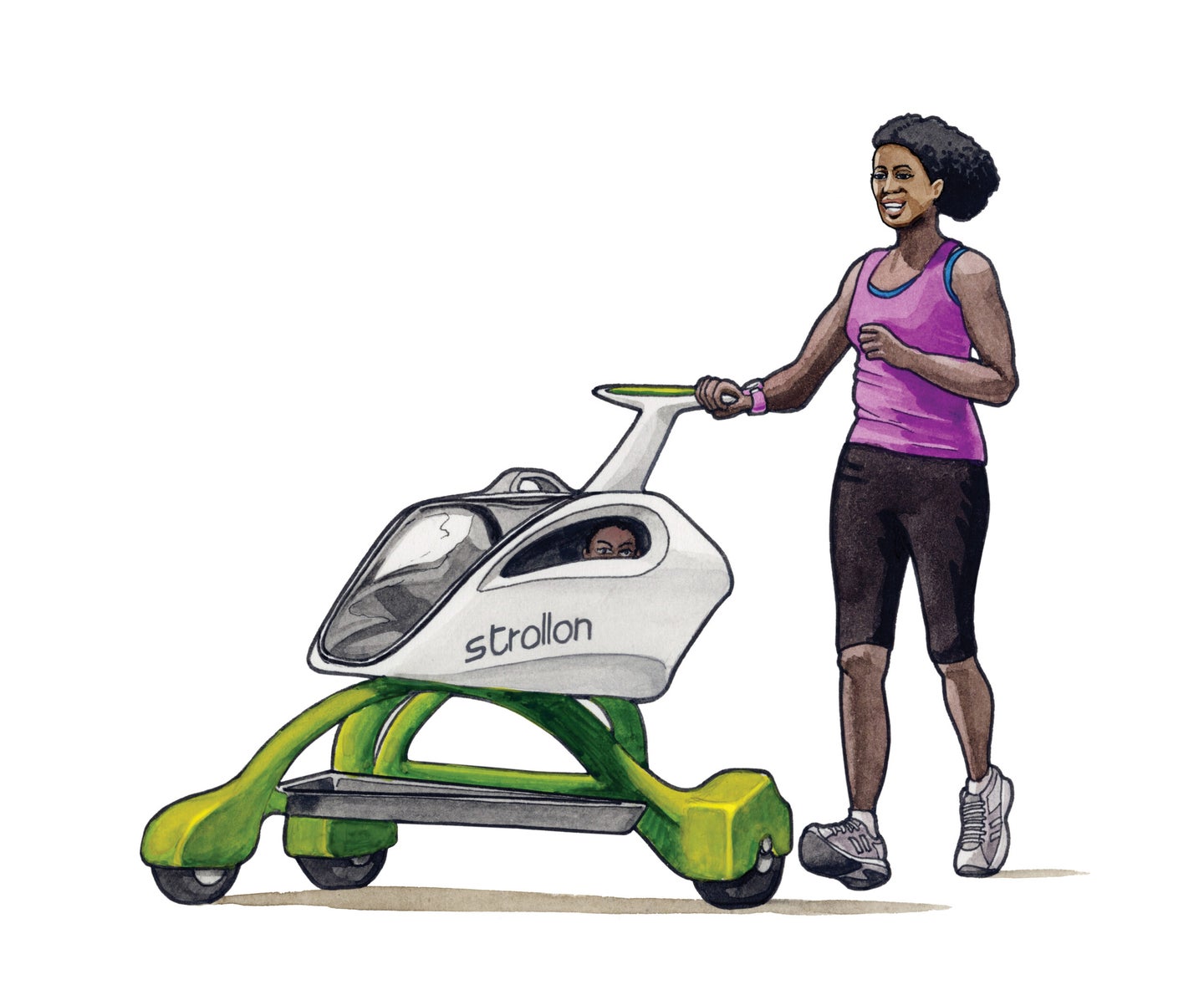 A space-age stroller for the luckiest kid in the world! French designer Amir Labidi knows how much children love vehicles. So why not make a stroller with a windshield, side windows, a removable door, and a sporty exterior? Done! Welcome to the future, wee human.

So it says on the Strollon website. (And yes, I can attest that it certainly helps.) Moststrollers are designed with the parents in mind. This one, however, was clearly built forthe kid’s enjoyment. Can I still at least have a coffee holder, pretty please?

1. The stroller comes equipped with a pair of detachable class-4 laser guns to combat automobiles that refuse to give pedestrians the right-of-way.

2. After reports of diaper aisles being knocked down due to shock waves from the stroller’s sonic booms, safety guidelines were placed on the Strollon to keep the speed just below 767.269 miles (1,234.799 kilometers) per hour.

3. Elon Musk and Richard Branson have joined forces, commissioning Yanko Design to manufacture a self-sustainable Strollon that will be capable of easily navigating the rocky surface of Mars.

Just as there’s a first verified bicycle, there’s also a first verified baby carriage. It was built in 1773 by English architect and furniture designer William Kent for the third Duke of Devonshire’s children. The carriage was designed to be pulled by a dog, a goat, or a miniature horse!

“Five! Four! Three! Two! One!” Those are the muffled words the human cannonball can hear being chanted by the audience just before being launched 100+ feet (30+ meters) toward (hopefully) a large net, cushion, or body of water. Human cannonball acts have been around since the late 1800s, but starting in the 1930s a few of these daredevils realized how much more convenient it would be if the cannon were mounted onto the back of a truck. This makes it much easier to tour from one location to another, and you can even advertise along the way! Win-win. Human cannonball trucks have belonged to members of the famed Zacchini Family, the Great Wilno, Luis Muñoz, Capt. Von Fendrick, Harry Pollak, and David “The Bullet” Smith Jr. In every case, the trucks or buses have been modified to fit a15- to 25-foot (4- to 8-meter) cannon, which can be raised or lowered to mark the human cannonball’s target. As far as I can tell, being a human cannonball might be the only job where you get fired just about every day.

How does the cannon part work?

I knew you’d ask. It’s a trade secret, and no human cannonball is going to tell you! But I can at least say that it’s not really a “cannon,” since a propellant is not used to project the person. “Catapult” would be a better word. Various performers have used various designs, but almost all have used some form of spring or compressed air to quickly push an inner chamber or platform forward. When the chamber reaches the end of the tube, it stops … and the human keeps going! Exploding gunpowder is often added just for effect.

A few things you should know before cannonballing …

1. Apparently it doesn’t feel so great to be launched from a cannon. Shawn Marren, “the sorcerer of the stratosphere,” explains that he locks every muscle he can possibly lock while traveling from 0 to 60 miles (97 kilometers) per hour in just a quarter of a second!

2. The current distance record of any human cannonball is 193 feet, 8.8 inches (59 meters, 22 centimeters), claimed by David “The Bullet” Smith Jr.

3. Of all the human cannonballs out there (it’s speculated to be a little more than 100 people throughout history), more than 30 have died from mishaps. In other words, there are safer jobs out there.

4. The kinematic equation for calculating where to place your landing cushion is in the equation above, where “R” is the horizontal distance from the muzzle of the cannon, “v0” is the initial velocity, “g” is the acceleration due to gravity, and “θ” is the launch angle … just in case you needed to know. Again, I don’t recommend you launch yourself from a cannon.* *This equation doesn’t take into account wind resistance or common sense.

Who wants a personal helicopter? Me! Though I might pass on this one, considering the pilot is required to stand directly above two high-speed rotor blades. Yikes! Manufactured by de Lackner Helicopters, this flying machine made a brief appearance when the U.S. Army ordered twelve units back in the 1950s. One brave (or foolish) man named Captain Selmer Sundby volunteered to test the Aerocycle at Fort Eustis in Virginia. Sundby held on to the motorcycle-like handlebars, taking numerous flights (one lasting 43 minutes). Twice, however, he had accidents—both times, the counter-rotating blades collided into each other and shattered. Sundby was unharmed, but the HZ-1 project was forever abandoned. Perhaps for the best.

According to a 1950s issue of Popular Mechanics magazine, “Tests show that inexperienced men can become proficient operators after only 20 minutes of instruction.” Captain Selmer Sundby stated otherwise: “… it only took me one flight to realize that a non-flyer would have considerable difficulty operating it.”

I know what you’re thinking. It doesn’t look like a turtle! Perhaps more like a barnacle? More important, this is the first documented submersible to be used in battle. It’s a one-person-operated wooden ball that’s capable of attaching explosives to the bottoms of unsuspecting ships. At least, that’s what it tried to do during the American War of Independence. On September 6, 1776, using foot pedals and hand cranks, Sgt. Ezra Lee piloted the Turtle through the rough waters of New York harbor to the British Navel ship Eagle, which was moored just off Governors Island. Lee made every effort to drill the explosives to the underside of the ship, but failed (likely because the hull was made of metal), and was forced to retreat due to diminishing air. Nonetheless, the Turtle goes down in history as an essential part of the evolution of modern submarines and submersible combat.

David Bushnell, an American inventor from Connecticut, conceived of the Turtle. He proposed his invention to the Connecticut governor, Jonathan Trumbull. Trumbull, in turn, recommended it to George Washington, who approved funding for the project. Despite the Turtle’s missed moment, Washington referred to the invention as “an effort of genius.” I must agree.

Totally ridiculous and awesome operating procedures for the Turtle

1. In 2007, artist Duke Riley launched a replica of the Turtle into the waters of Red Hook, Brooklyn. As he neared the British cruise ship Queen Mary 2, he was arrested by police and issued a citation for violating the QM2’s security zone. The sub, which carried no threatening devices, was impounded.

2. In 2019, among the equipment at J. J. Byrne Playground in Brooklyn is a large plastic map of New York Harbor, which allows toddlers to slide a British warship and a Turtle along its guided paths.

Crossing Antarctica isn’t easy. Having a Winston Wong Bio-Inspired Ice Vehicle certainly helps. Designed for the Moon-Regan Antarctic Expedition of 2010 (lead by Andrew Moon and Andrew Regan), this propeller-powered sled was driven across some seriously sketchy terrain: from the west coast of Antarctica to the South Pole, through the trans-Antarctic Mountains and down the Leverett Glacier. The team of ten took turns driving the WWBIIV while the other nine followed behind in two massive six-wheeled trucks, which contained monitoring equipment and were used as mobile laboratories. In total they traveled 2,485 miles (3,999 kilometers) over the course of 23 days. At times the team was up against 60 mile (97 kilometer) per hour winds that created frozen windshields and severely limited visibility. Needless to say, this is less than ideal for traveling across a landscape that features hidden crevices and cliffs! The main objective of the journey was to monitor the environment as well as the environmental impact of the vehicles, but I sort of get the feeling that they really just wanted to travel across Antarctica in a Winston Wong Bio-Inspired Ice Vehicle!

When deployed, the brake unit lowers into the ice and uses its tungsten carbide spikes to drag the vehicle to a stop.

Which one is NOT true?

2. The WWBIIV is 1,543 pounds (700 kilograms), which makes it light enough to be pulled by rope, should rope-pulling be needed.

4. The driver can adjust the angle (or pitch) of the propellers’ three blades, providing better fuel economy.

5. The driver of the vehicle is equipped with adjustable heat and a 5.1 surround-sound stereo system, allowing the driver to travel in subtropical warmth while rocking out to the Beach Boys.

Answer: Yup, it’s #5. The vehicle has NO heat or stereo. In fact, the cabin is not even enclosed. Brrrrrr.

Who in the world is Winston Wong?

You mean you don’t know? (It’s okay, neither did I.) Winston Wong is a Taiwanese physicist, philanthropist, and entrepreneur. In partnership with Imperial College London, Dr. Wong funded the Moon-Regan Expedition, which of course included the Winston Wong Bio-Inspired Ice Vehicle. I wonder if the vehicle has a bumper sticker that says WWWWD?

Pick up Michael Hearst’s new book to learn about more unconventional vehicles through human history. Or listen to the accompanying album, which you can preview on YouTube.