All metal is made of crystals; you just can’t see them—without a little acid, anyway 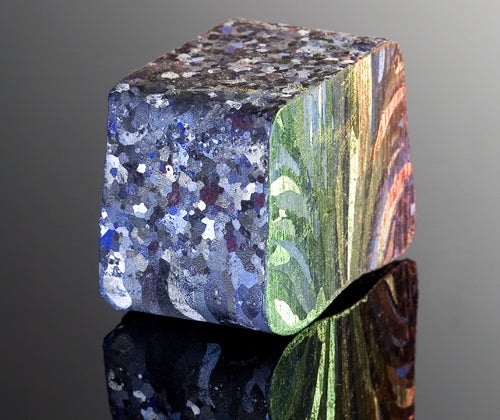 A piece of pure aluminum after being treated with muriatic acid. Mike Walker
SHARE

The phrase “passing the acid test” gained popularity in the gold-rush years of the 1850s when miners used strong acids to determine whether the metal they had found was real gold or not. If it bubbled and frothed on contact with acid, it wasn’t gold. But even these failures produced something interesting and beautiful.

When pure metals cool, they solidify into intricately interlocked crystals. You can’t see the crystals because they fit together perfectly to form what appears to be a uniform mass with a smooth, solid surface. But acid can reveal the structure inside. 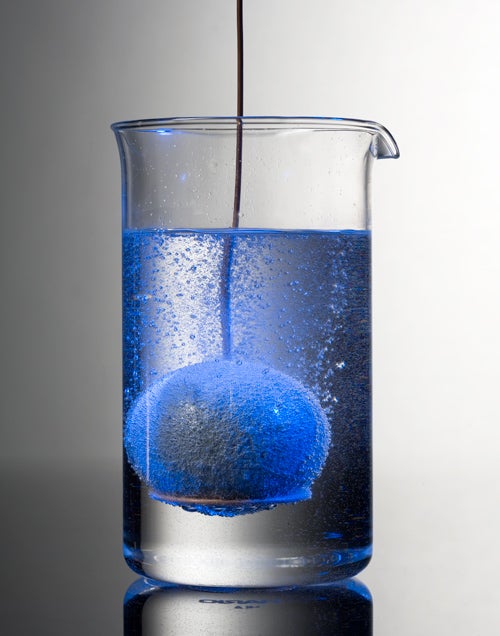 A sample of zinc dipped into a beaker containing muriatic acid fizzes as the acid breaks down the metal and releases hydrogen gas, revealing the crystal structure underneath.

When you dip pure metals into strong acid (the muriatic acid available in hardware stores, for example), they dissolve slowly by releasing hydrogen gas (gold, being inert, doesn’t give off hydrogen; thus, no frothing). Instead of breaking down the metal uniformly, the acid etches out microscopic ridges and valleys aligned to the crystal structure of the metal. This creates light and dark patches on the surface that change with the direction of the light. As you turn the sample, the patches sparkle on and off, an effect known as diffraction that you can also see on the backs of CDs.

I use samples of pure zinc and aluminum to demonstrate this, since metals that have been cast and then allowed to cool slowly produce larger internal crystals. Although I haven’t found one yet, I’m sure that somewhere out there is a common household object—candlestick, metal bowl—that would reveal a pretty crystal structure under the acid test. For my wife’s sake, I hope I find one soon, so I don’t have to keep trying to dissolve every new kitchen gadget I get.

Achtung! Concentrated muriatic acid is available in most hardware stores, but that doesn’t mean it’s harmless. It should never be handled by children, even under adult supervision. Work in a well-ventilated area, wear gloves and ANSI-approved splash-proof safety goggles at all times, and read and follow all other safety instructions on the bottle.

Like what you see? For more Gray Matter, head to popsci.com/graymatter. And for Theodore Gray’s one-of-a-kind periodic table poster, check out periodictable.com/posters

Apologies In the midst of a move, Theodore Gray’s etching video was lost. We do not have a footage of the experiment in action. If you do the experiment and make a video, however, send it our way; we’d love to see it and may run it.