Sorry, Edison, your bright idea is a model of inefficiency 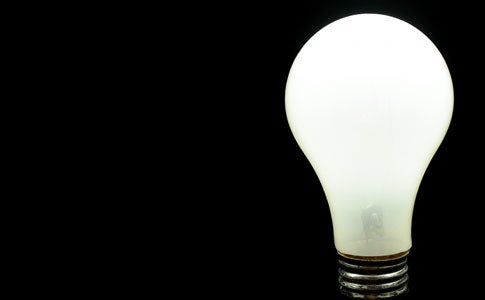 The lightbulb has remained virtually unchallenged since Edison invented it more than a century ago, but now scientists believe that zinc oxide–the same chemical that keeps diaper rash at bay–could provide a much-needed alternative to the inefficient lights that dominate our homes. In its crystalline form, zinc oxide can be used to make a light-emitting diode (LED) that
could convert electricity to light 10 times as efficiently as the tungsten filaments used in today’s incandescent bulbs. It also lasts 10 times as long.

Tungsten shines white only when heated to 4,500 degrees Fahrenheit, an energy-sucking process that converts just 5 percent of electricity to visible light. “A zinc-oxide-based bulb, on the other hand, doesn’t require heat to produce light,” explains physicist David Look of Wright State University. And it glows brighter and more efficiently than other LEDs, because it emits mostly ultraviolet light, which is easily converted to visible light. Switching from tungsten to light sources like zinc oxide could reduce global electricity consumption for lighting by more than 50 percent.

The catch? The conversion will require expansive infrastructure changes, which the industry may be slow to embrace. But the long-term financial incentives, Look says, will be hard to ignore. Upgrading to zinc-oxide LEDs could
help save Americans more than $35 billion
a year.