Lurking in the shadows of Moore's Law is a subculture of retrocomputerists who believe PCs only get better with age. 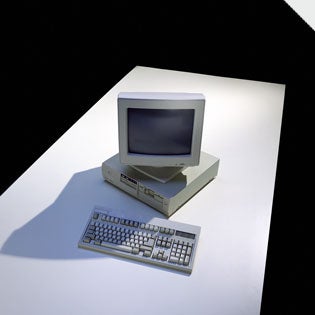 Down in the spare room is the computer I affectionately call Frank. As in FrankenMac. It has the case and motherboard of a Macintosh clone from 1997, stuffed with new RAM and a CPU upgrade six times the speed of the original. It’s on its second video board and Ethernet card, and
has a USB adaptor (a technology barely invented when Frank was born) and a replacement 60GB disk. I installed Linux on it a while back because the last few generations of MacOS never did run quite right. And what with the realities of my eat-at-your-desk household, I’ve lost count of how many keyboards Frank has gone through.

In the world of active-yet-obsolete — the polite term is “vintage” — computers, Frank is an infant. As the era of mass-market personal computing heads for its 30th year, no one knows how many superannuated desktops are still out there chugging away, though reports from around the Net mention still-active Apple IIs, Commodore 64s, first-generation IBM PCs and clones, and even the odd IBM PCjr (a scaled-down, overpriced PC offshoot that garnered widespread ridicule when it was introduced back in 1983).

There are three types of people responsible for this computing-with-the-undead phenomenon. I like to think of them as the nostalgists, the pragmatists and the adaptists.

The nostalgist impulse sequesters ancient machines in ad hoc museum collections — veteran programmer Bruce Damer’s Digibarn, for instance, houses hundreds of PCs dating back to the mid-’70s. Damer says he keeps old hardware and software running because static museum displays do nothing to convey the actual experience of using a Radio Shack TRS-80 with its subminiature tape drives, or one of Steve Jobs’s original Next cubes. Damer invites computer builders and users to his museum to put their reminiscences on video for the day when old components finally give up the ghost.

Meanwhile, says Vintage Computer Festival organizer Sellam Ismail, the pragmatists are plugging away at day-to-day office work on uncounted thousands of archaic PCs. When Dell ran a contest back in 1999 for the oldest small-business PC still in use, the company turned up more than 200 worthy entries in addition to the winner, an Altair 8800b that had been used for word processing since October 1976. And aging control computers that run industrial or lab equipment generally don’t get replaced until the machinery they’re attached to wears out — one classic-computer aficionado says his mass spectrometer has been hooked up to the same Apple II for 20 years.

Finally, adaptists around the world continue to bang out letters, novels,
e-mail and code on revamped elderly machines. Consider British electronics designer and exâ€particle physicist Tony Duell, whose primary machine is a pervasively upgraded PC-AT from 1986. (Among the many other computers running in his house is a 31-year-old PDP-11 minicomputer.)

“Why?!” asks the megahertz junkie in me. “Why not?” replies my retrocomputing alter ego. Fact is, if you don’t absolutely need your computer to play broadcast-quality video clips in 3-D windows while you navigate via throbbing full-color control buttons that unleash CD-grade stereo sound with each click, you probably don’t need a machine built in the past 10 years — certainly not for your backup basement machine.

Sticking with the same computer (“same” being a relative term) also yields real benefits, says Duell. You seldom have to throw away your old software, and you’re less likely to misplace crucial files, as can happen when upgrading from one machine to another. “I never trust people who say they’ll copy all the files over to the new machine,” Duell laments. “They never do, and five years later some poor person like me is called in to recover a file from some unknown floppy disk.”

If you’re willing to install Linux or FreeBSD instead of the bloated monsters that pass for industry-standard operating systems, a 386 or 486 machine with 16 or 32 megabytes of RAM will do just fine for everyday work. Even if you’re addicted to windows and mice, there are some minimal windowing systems whose entire program code takes up less RAM than half a dozen icons on a fancier box. (A simple Google search for “minimal window system” yields a range of options.)

And all the hype about Internet-optimized Pentia notwithstanding, 386 and 486 computers around the globe serve as firewalls and routers, e-mail and Web servers directing Internet packets to their destinations in homes and small offices. It only stands to reason, after all, that a machine capable of performing tens of millions of 32-bit operations per second should be able to keep up with a pipe that delivers no more than a million bits of new data in that time.

Finally, in an age when bleeding-edge hardware can set you back a few thousand dollars every year or two, the price of obsolete technology looks right: Used-computer dealers sell perfectly capable machines for $50 to $100 — or you can try to snag one of the millions of working PCs that end their lives in dumpsters every year. Even vintage-computer users who bought new and pay top dollar for parts upgrades are saving a bundle: Duell, for one, hasn’t bought a new kit since 1995.

I have mixed feelings about the whole enterprise. On the one hand, I’m always going to lust after the newest, fastest hardware out there. On the other, I can’t bear to get rid of my old toys. Maybe Frank will become a Web server or an image-processing engine or an outlet for some of my stupider software ideas. And if I make some terrible, terrible hacking error on Frank, I’ll still have the working — if far less romantic — machine on the desk in my office.