Altitude sickness can ruin your hike. Here’s how to prevent it.

Getting high is not always as fun as it sounds. 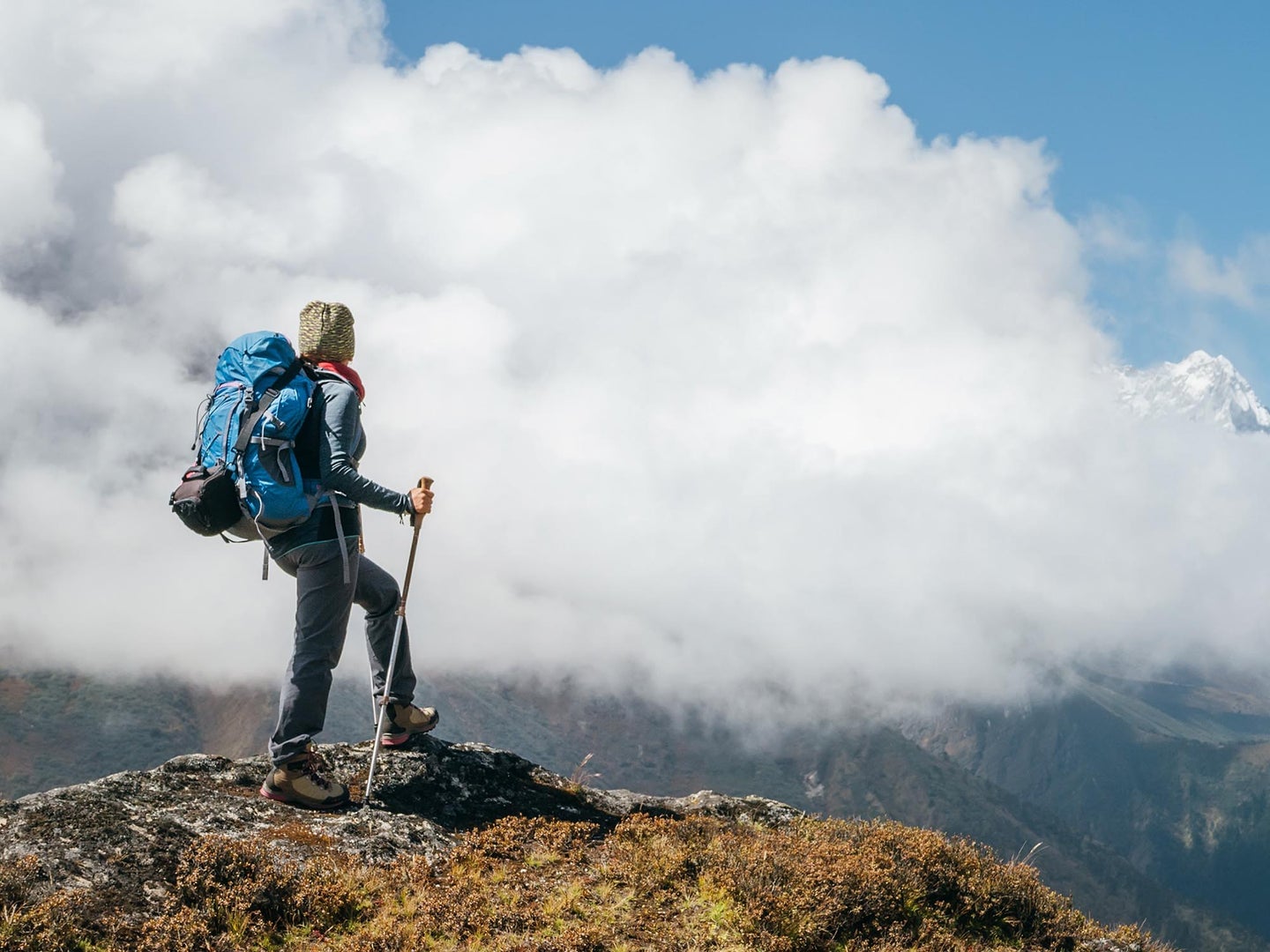 The views from the heights of mountainous regions can be magical and spectacular, but not if you’re bent over, huffing and puffing, nauseated, and nursing a headache. Often referred to as acute mountain sickness, altitude sickness can occur as low as 5,000 feet, and get more severe the closer you get to 10,000 feet. It can take many forms, too: Only some are serious, but all of them can put a damper on your adventures.

If you’re headed up, here’s how to prepare and treat symptoms, and what to look out for to ensure you stay happy and healthy while closer to the sky.

It’s not a matter of composition, but concentration. At high altitudes, there’s less atmospheric pressure, which reduces the number of oxygen molecules in a given volume of air compared to the same volume at a lower elevation. For example, at 10,000 feet, you only get 69 percent of the oxygen you’d get at sea level.

Essentially, the higher you go, the less efficient your breathing becomes, resulting in less and less oxygen every time you inhale. In response, your body tries to get the oxygen it needs, so you start breathing more rapidly. But despite this effort, there’s still less oxygen making it into your blood and muscles, which is why physical activities feel so much harder at higher elevations. This condition is called hypoxia, and it’s what causes altitude sickness symptoms to set in.

What are the symptoms of altitude sickness

Altitude sickness is not fun and it’s definitely not easy to ignore. Symptoms will likely involve a headache, nausea, possibly vomiting, and maybe even loss of appetite. Sometimes it may also be accompanied by the extremely aggravating combination of tiredness and insomnia.

“It felt like a really bad hangover,” says Prather about the first time he experienced altitude sickness.

It’s a feeling that usually hits within a day or two of arriving at a high-altitude destination, but you may still feel mild symptoms like lightheadedness before that, especially when bending over and standing up quickly, or walking up stairs.

In addition to this, great elevations also make you more susceptible to dehydration, which can exacerbate the symptoms of altitude sickness. That’s in part because every time you breathe out you expel moisture, so an increased respiration rate results in your body losing more water than usual. And the dry conditions that come with higher elevations don’t help: the lack of humidity makes moisture evaporate quickly, which can trick you into thinking you’re not sweating as much as you are and don’t need to rehydrate. Drinking a lot of water is crucial, especially in the first few days of acclimatization.

“We cannot hydrate away altitude sickness, but we can at least not be dehydrated on top of it,” Prather offers.

Most of the time, these symptoms are not life-threatening and only require acclimatization to abate. But especially at elevations over 10,000 feet, symptoms can worsen and lead to more severe health conditions: High altitude cerebral edema (HACE) or high altitude pulmonary edema (HAPE).

HACE typically comes with a loss of balance, episodes of confusion, and possibly a severe headache. On the other hand, HAPE presents itself with decreased stamina, breathlessness (even at rest), and a persistent cough that starts out sounding dry and transitions to wet, signaling the presence of fluid in the lungs. HAPE is more common than HACE, but both can be deadly, which is why it’s important to head down in elevation as soon as you start experiencing symptoms.

Who’s at risk of altitude sickness

Unfortunately, science hasn’t identified any specific markers for who may or may not suffer from altitude sickness. The only indicator seems to be that if you’ve suffered symptoms before, it could happen again. But at the same time, if you’ve never experienced symptoms it doesn’t necessarily mean you never will.

Not even athletes or people in excellent shape are immune. In fact, Prather says those tend to be who he’s most worried about when leading trips, as non-athletes tend to listen to their bodies and pay attention to symptoms, whereas athletes may try to push through the pain or discomfort.

How to prevent altitude sickness

There are three main factors that affect not only your risk of developing altitude illness, but the magnitude of hypoxic stress you put your body through—elevation, how quickly you’re ascending, and your level of exertion. Fortunately, you can prepare for each of them.

Start by planning ahead and allowing enough time for acclimatization. Don’t expect to land in Quito, Ecuador (9,350 feet above sea level), the Himalayas (29,032 feet), or even Denver (5,279 feet) and immediately set out to summit even a moderate peak. Your body needs between 24 and 48 hours to adjust to new altitudes, but the time it takes you to fully acclimatize may vary. The National Outdoor Leadership School’s curriculum specifies that “if you travel to 10,000 feet or above quickly, take two to three rest days with light exercise.” If you take time to get acclimated, symptoms won’t likely hit as hard.

Once you’ve given your body time to get used to the new conditions, don’t rush into summiting anything—the faster you climb, the more likely you are to suffer symptoms. If you have a multi-day hike to higher elevations ahead of you, Prather recommends spreading the trip across several more days, so that once you’re above 10,000 feet, you and your team can ascend in stages where each night you sleep at altitudes no more than 1,500 feet higher than the night before. Throw in frequent rest days, too.

If you can, consider spending the night at lower elevations, as sleeping at high altitudes is even harder on your body. To do this, you can go on climbing trips during the day, and then go down to your base camp at night.

Before, during, or even after a hike at altitude, avoid alcohol (especially when you first arrive and your body is not yet acclimated) and sedatives to help you sleep, as they can make symptoms worse. Both these substances, Prather explains, depress your drive to breathe by slowing your breathing and making every breath more shallow than usual, which is the opposite of what you need at high altitude.

“You want your respiratory drive to be responsive to the atmosphere you’re in,” he says.

How to treat altitude sickness

Altitude sickness can be sneaky, so even if you tried your best at prevention, you may still experience symptoms. When it comes to feeling better, light exercise can help, so take an easy walk to get your respiratory rate up. Since nausea is one of the most common symptoms, it’s possible you may not feel like eating, but you should also make a point to maintain adequate nutrition to stay in good health.

Over-the-counter pain meds like ibuprofen and acetaminophen can help lessen the severity of headaches, but avoid anything stronger, like opiates, which have a similar effect to alcohol and sedatives, Prather says.

If you are expecting to experience altitude sickness, ask your doctor about acetazolamide. This drug can alleviate symptoms of altitude sickness by speeding up your respiratory drive. It works by changing your blood’s Ph to be more acidic, which makes your body believe there’s too much carbon dioxide. As a result, your system makes your breathing faster and deeper in an attempt to eliminate carbon dioxide, resulting in a higher concentration of oxygen.

Finally, if altitude sickness persists or worsens despite your best prevention and treatment efforts, take Prather’s words as your new motto: “Don’t go up until your symptoms go down”. If there’s no improvement, it may be time to head to a lower elevation. Don’t worry—you can always try again next time.