How to prevent getting struck by lightning

And what to do if you are. 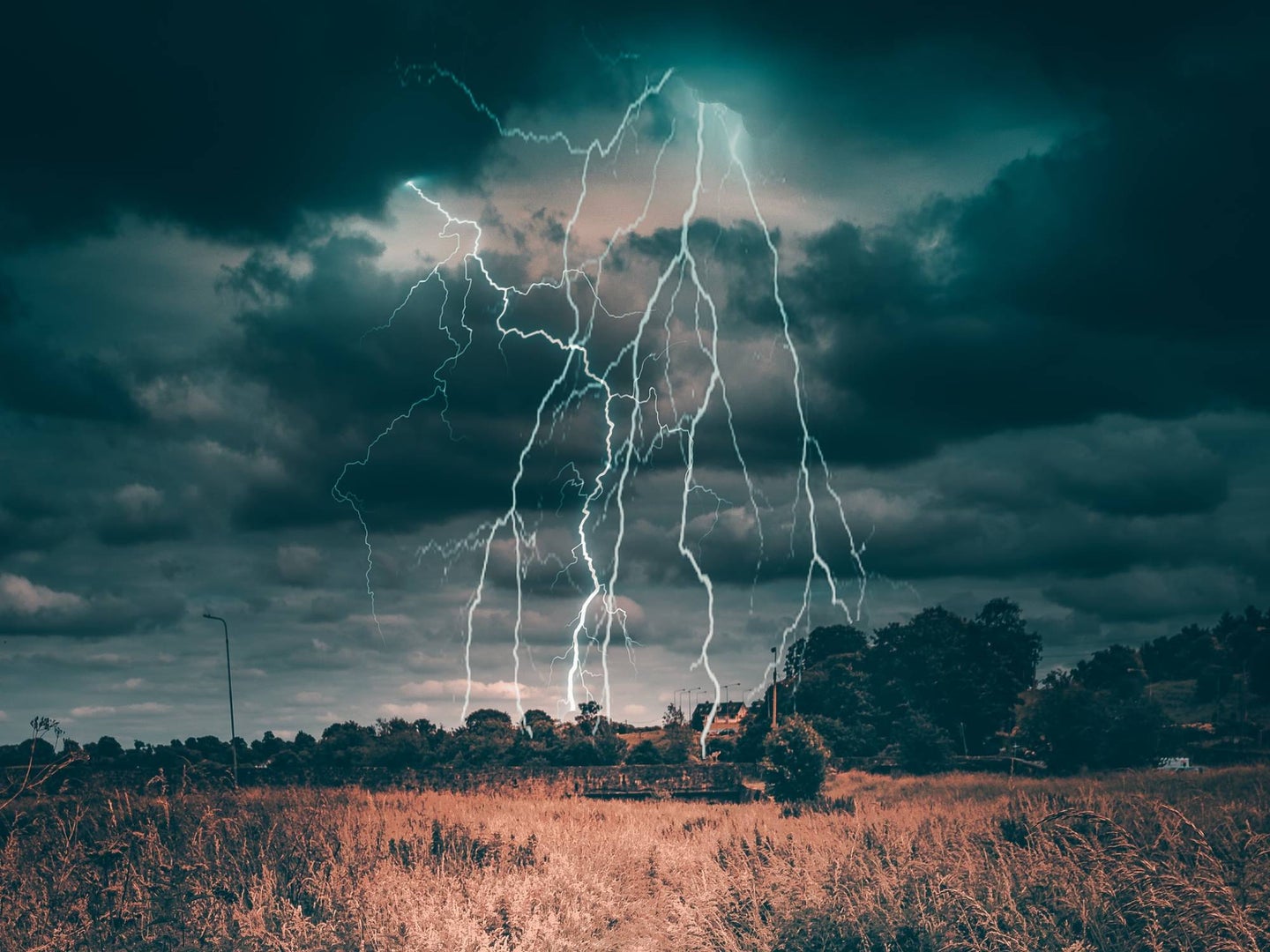 Lightning is a mesmerizing natural phenomenon. The way it lights up the night sky with bolts of searing electricity is, well, electrifying. But anyone who has ever experienced the shock and awe of a nearby lightning strike knows it’s much more than a free light show—lightning demands respect.

So before summer storm season starts in earnest, take a moment to learn about lightning safety so you can protect yourself when the clouds roll in.

Lightning isn’t cast down by Zeus or summoned by Thor—it happens when positive and negative electrostatic charges build up in the atmosphere. When those opposing charges equalize, there’s a rapid discharge of powerful electricity (up to 300 million volts) in a visible explosion: lightning.

These charges can occur within clouds, but it’s when they link the clouds and the ground that lightning poses a threat to those of us on the earth below. When that happens, anything (or anyone) can be struck.

But while we tend to think of lightning as single bolts shooting from cloud to ground, the phenomenon is much more complicated. In fact, the National Weather Service says there are five ways lightning can strike people.

One is via a direct strike, which is when a person is struck directly by a bolt of lightning, usually in an open field where they are the tallest thing around. Despite common perception, this is not the most likely way to be struck.

[Related: Dissecting a lightning strike, from flash to boom]

That distinction goes to ground current, which causes the most lightning-related deaths and injuries each year. This happens when lightning strikes an object and the electricity runs through the ground and up into your body through one of your feet, and exiting out through the other. The strike doesn’t even have to be nearby—the current can travel as far as 100 yards, according to Greg Schoor, a researcher of severe weather and weather patterns at the NWS.

You can also be hit by a “side flash.” This occurs when someone is standing close to a tree or another tall object. When lightning strikes that object, an arm of electricity, also referred to as a step leader, may branch off from the main bolt as the current jumps from object to human.

Conduction strikes occur when, as their name implies, conductive materials are involved. It’s like sticking a fork in an electrical socket: if you’re touching something like a metal fence when lightning strikes it, you are going to absorb the shock. This type of shock can even get you indoors if you’re showering, using a landline telephone, or touching anything else that’s connected to wires or pipes that run outdoors.

Streamers are the least-common way to experience a lightning strike, but don’t discount them entirely. Think of these as the disembodied arms of a flash of lightning. When the lead bolt discharges, a streamer can appear nearby. And if you form a conductive bridge between one of these streamers and the ground, you can be struck.

The damage lightning does

When you are struck by lightning, a few things happen. First, the electricity from the bolt moves over the surface of your skin, potentially causing burns—this is called a flashover. Second, the current runs through your cardiovascular and nervous system, which is what causes the most damage.

Because lightning is so hot (five times hotter than the surface of the sun), burn damage is also a possibility, but may not be evident until necrosis or muscle damage sets in. Your circulatory system can be clogged, kidneys damaged, and seizures and muscle contractions may ensue.

The type of damage depends on the severity of the strike, but you may experience an irregular heartbeat, optical disturbances, memory issues, and ruptured ear drums. According to Miguel Pineda, ER doctor and wilderness medicine fellow at UC San Diego, the extreme electric charge and pressure change caused by a strike can even paralyze the lungs and heart, leading to respiratory and cardiac arrest.

What is unique to lightning strikes, Pineda says, is that the paralysis of these affected organs will resolve after several minutes, similar to a computer rebooting. That is, if the lightning itself hasn’t killed you already.

Lightning kills around 20 people each year and injures hundreds more. In 2020, that number was 17 and included people from all ages and walks of life. Almost all were outdoors when they were struck, and many were under trees or tall structures. And while the chances of being struck or killed are low, it’s wise to do everything you can to avoid being hit.

How to avoid lightning strikes

Before you even step outside, it’s critical that you’re aware of the forecast. Check local and national severe weather forecasts so you know what to expect and can make a plan for if the weather turns sour.

Once you’re outdoors, the first rule of avoiding lightning is to take shelter as soon as you hear thunder, which is a guaranteed sign there’s lightning nearby (you can’t have thunder without lightning). But don’t think you’re safe because the dark clouds are far off on the horizon—lightning can strike as far as 20 miles away from a storm, according to Greg Schoor.

And unlike with other natural phenomena like tornadoes or hurricanes, there’s no warning sign before lightning strikes. It just does. Sometimes out of the clear blue sky.

“The danger is really in the uncertainty.” Schoor says. “There’s no lead time on exactly where lightning will strike. There’s no way of telling where that’s going to occur.”

That’s why it’s important to take cover. Head indoors or to a vehicle right away, because there’s no safe place outdoors in a lightning storm. Stay far from bodies of water like ponds or even puddles; these are excellent conductors.

If you’re stuck outside on a hike or camping trip, find whatever shelter you can, whether you end up against an embankment, in a cave, or under a cliff. “In the most basic terms, don’t be the tallest thing around,” Schoor says.

You should also remove any backpacks with metal gear that could turn you into a human lightning rod. And whatever you do, don’t seek shelter under trees. “Your risk of getting struck by lightning increases a lot because you’re associating yourself with the tallest thing around,” explains Schoor.

If you’re with others, spread out as far from each other as possible, recommends Roland Sosa, a volunteer mountain rescue member who has trained extensively for lightning encounters and witnessed the aftermath of one firsthand while on a Scouting trip as a teen.

And if there are no options for shelter nearby, assume the lightning position: crouch down with your hands over your ears, heels touching. This will allow the electrical current to pass more easily through your body if you’re struck.

If you find a spot indoors, stay off of landlines, out of showers or tubs, and, if you’re using a laptop, leave it unplugged. As mentioned above, it’s wise to stay away from any device that’s connected to outside power or pipes.

Then, once the storm has passed, Schoor says to wait 30 minutes before heading back outside or leaving shelter; you can still be struck if the storm is heading away.

Let’s take a moment to dispel some of the myths surrounding lighting strikes. For example, you can’t be electrified by touching someone who has just been struck; the human body doesn’t store electricity.

And contrary to the popular saying, lightning can absolutely strike twice in the same location, so it’s prudent to move to safety if lightning has struck nearby.

[Related: A mystery with a shocking twist: Death by indoor lightning]

Finally, there’s no need to run to the southeast corner of the house or open any windows, either—a belief that overlaps with unscientific advice about tornadoes. “Most myths came from non-researched understanding, like from someone’s personal experience,” says Schoor.

What to do if someone near you gets struck

The first thing to do is to call 91. If they are unconscious or not breathing, begin CPR immediately. According to Pineda, this allows the heart, lungs, and brain to receive enough oxygen to help them restart after cardiac or respiratory arrest.

Even if you or the struck individual is conscious—even walking—it’s still important to get to the hospital immediately, as not all injuries will occur or be visible right away. The good news: “If treated immediately, the majority of lightning strike victims are able to completely recover,” Pineda says.

So take heart and take cover the next time a thunderstorm rolls in. That way, your chances are good that you’ll live to see the next summer storm that lights up the night.