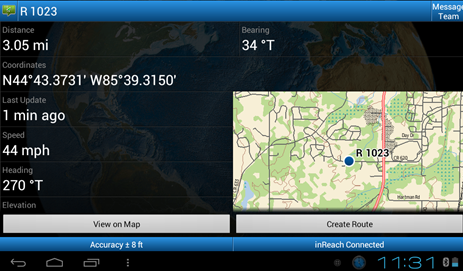 Let’s say you and your friends like to get together to build outrageously tough and seriously fast off-road vehicles and race them in far-off-the-grid places, like the Baja 1000. Now let’s say that some component of your beast of a race vehicle fails or just plain falls off, and your chase vehicle is a hundred miles away. As IT specialist and off-road enthusiast Bud Gaston puts it, “A phone is useless out there.” Which is why Gaston built DesertTrax.

Gaston combined his years of professional satellite tracking experience with his years of off-road and off-grid experience to create a digital satellite communication system specifically for extreme off-road racing. “I put together equipment from here and there,” he said in a phone interview, “and then program it to work,” no matter where on the planet a team may be racing. According to teams that have used the system, it’s more reliable in the middle of nowhere than even a satellite phone.

Gaston started with trackers from DeLorme, a company whose satellite communicators often track hikers and backcountry snowboarders. He worked with DeLorme and its Earthmate system to create teams of trackers that “see themselves as a group,” according to Gaston. Then he programs trackers to work together as a team rather than as individuals.

The interfaces, which are in the race and chase vehicles, are rugged, military-grade Panasonic tablets running Android that can take all the bumping and banging of an off-road race vehicle going 100 mph. Gaston then customized Pelican tablet cases with metal brackets to further protect the equipment. Each DesertTrax system is not only built by Gaston, it’s installed on-site by Gaston, and he trains the teams in using the touch pads to communicate via 160-character text messages and find the race vehicle, the chase vehicles, or see all of the team’s vehicles at once on the map.