Smart Plankton-Like Particles Could Swim Upstream In The Human Body

They swim just like parasites, but would do good instead of harm 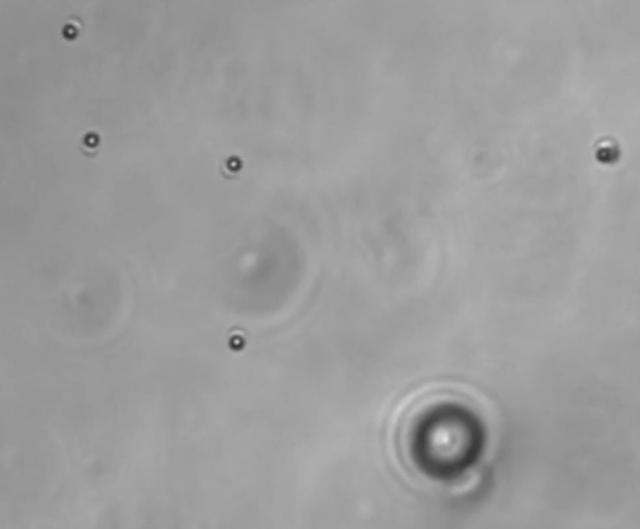 From armored fish scales to ice-proof airplane coating based on frog’s skin, the natural world has long been an inspiration to engineers. For those designing implantable medical devices, incorporating elements of the natural world has been even more challenging. Now an international team of physicists has developed microparticles that move like microorganisms in the body and are able to swim against the flow of bodily fluids. The researchers hope that this technology could be used to unclog arteries or deliver drugs to specific parts of organs, according to the study published today in Science Advances.

This isn’t the first time researchers have developed biomimicking particles, but self-propulsion has caused a problem in the past. To make these particles, the researchers wrapped hematite, an iron-based mineral, in a thin, pale polymer. Under regular conditions, the particles simply float when they’re in a solution. But if the particles are exposed to blue light, the hematite conducts electricity and, in a bath of hydrogen peroxide, starts splitting the oxygen from the hydrogen. The result is a chemical gradient on which the particle can flow, irrelevant of the direction the solution is moving, called persistent random walk. In the natural world, parasites and marine plankton move in the same way through the body and ocean respectively.

Clearly, these particles can’t yet be used in the human body, because the human body lacks pools of hydrogen peroxide and blue light. But the researchers are confident that, as they continue to fine-tune this technique, it could be used in various medical applications. “If you can design particles that can feel their environment, and you went one step further into ‘smart’ particles that could direct themselves towards specific organs, you could think of particles that swim against the blood stream to fix clogged arteries,” said lead author Jeremie Palacci, a professor of physics at the University of California, San Diego, in a press release. Though he also added that this type of application is “clearly further down the road.”