The Delicious Taste Of Struggle

Why the hardest-working animals, plants, and microbes taste the best 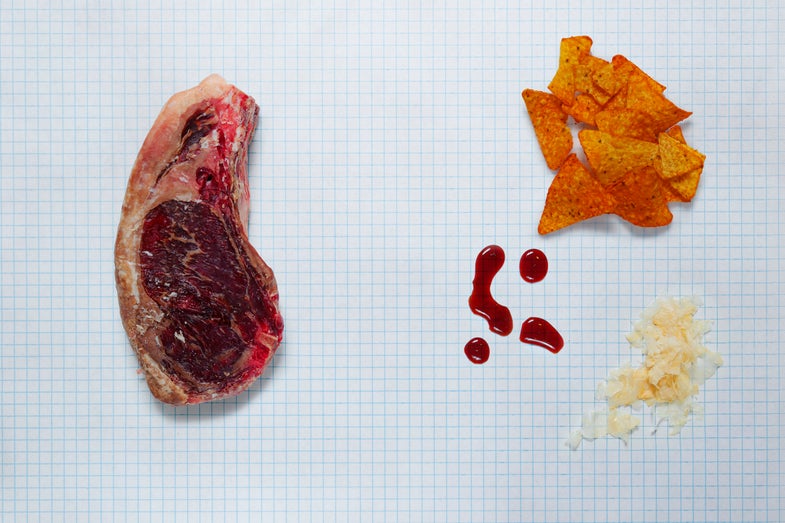 It’s not an ethical issue—I fully embrace the fact that the circle of life can be gnarly at times. Veal doesn’t appeal to me because of its taste, aroma, and color, or lack thereof. To rationalize eating a large, adorable mammal whose methane-rich excrement could seriously hurt my grandchildren’s chances of ever building a snowman, cow meat needs to be transcendent. I think beef should be a burgundy hunk of fatty flesh, a reservoir of flavor so deep and meaty that it can’t be found anywhere else in nature. Calves for veal production, babied as much as possible before slaughter, give us tender, lean, pink, mildly flavored meat. I’d rather eat good chicken, or plants.

Eating veal at this point is like listening to Top 40 pop music in a world where every song gives you a higher risk of ear cancer. If I’m going to be party to the production and slaughter of a cow for my nourishment, I want that meat to capture the bluesy, rich essence of an animal that has seen some shit. I also think that this principle should apply to more than just beef. Nearly everything we eat used to be alive, and all living things struggle through innumerable trials and tribulations in order to survive. That struggle isn’t just a cold fact of nature; it’s one of our most potent sources of deliciousness in the animals and plants that we devour and the microbes that we use to ferment them.

As a philosophical concept, struggle is emotionally charged and unendingly complex. As a biological phenomenon, struggle is the result of the most basic mechanisms of life. Beneath the surface of every living thing are cells: microscopic factories with furnaces that burn through energy reserves, demolition crews that tear molecules apart, and manufacturing lines where new molecules are fabricated from these pieces. Each time an organism encounters a challenge, its cells respond, firing up the furnaces to build the resources the organism needs to defend, attack, digest, heal, communicate with allies, and show off for potential mates. Those resources accumulate, weaving together an edible record of that organism’s life . . . and death, for that matter. The resulting scrapbook of molecules—ranging in size from bulky structure-builders to tiny messengers—creates what we eventually taste, smell, feel, and see on the plate. Over hours, days, and even years, life seasons our food with the flavor of struggle.

Most animals rely heavily on a single tool for dealing with the struggles of everyday life: muscles. They move to escape predators, attack prey, search for food, attract mates, and migrate as the seasons change. With movement, those muscles become darker and more sinewy. They stockpile iron to ensure a reliable supply of oxygen and collagen to create structural support for the wear and tear of frequent use. The plump, pale, watery breast meat of the average chicken is a clear reflection the bird’s flightlessness compared to the meaty, gamey redness of a powerful duck breast.

As an animal gets older and larger, its muscles become even darker and more sinewy to support moving more mass. The red meat of a duck breast pales in comparison to the tough, fibrous meat on the shank of a cow. For a cook, this accumulated mass of struggle-scarred collagen fibers represents latent succulence, as it can be unwound into gelatin after extended cooking to give body andluxurious viscosity to everything from broth to barbecue.

In addition to muscles, fat serves as an amazing barometer for the level of intrigue in an animal’s life. Animals that lead pampered, feedlot lifestyles ordinarily accumulate more fat than those allowed to blaze their own trails, but what little fat remains in an animal allowed to wander is almost always more flavorful. Animals that need to forage, graze, and hunt to survive accumulate a diverse collection of tastes and aromas that often eclipses the one-note blandness of animals fed the same gruel every day.

Plants Use Flavor To Communicate

The meat of well-lived animals can be incredible, but even the most interesting animal in the world would have a hard time competing with the sheer variety of delicious, aromatic, and colorful compounds accumulated and created in the cells of the average plant. This is because animals have the luxury of using brute force to survive. Plants must still deal with all of the realities of life—drinking water, eating, mating, defending themselves, and gossiping—only they have to do it without the luxury of gills, claws, mouths, or even brains for that matter. They have so little going for them in the way of movement that each plant is basically marooned on its own island, forced to rely on chemical smoke signals to interact with the rest of the world. Those signals are often delicious, and there are a lot of them.

One of the most potent ways to augment the flavor of plants is to threaten them. A lot of the aromas that we love in plant foods are really just those plants trying to kill us or tell us to get the hell away. Resinous herbs like thyme and rosemary use their fragrance as pesticide; onions and garlic manufacture their signature sulphurous compounds to attack our eyes and lungs; and the leaves of stone fruit trees send out almondy smelling benzaldehyde as a fair warning that you’ve just set off their internal security system. Exposure to the elements, pests, and minor physical damage can ramp up the production of these compounds as the plants stockpile defenses in a delicious arms race.

Another way to amplify the flavor of plant foods is by messing with their water supply. Crops obviously need some water to survive, but plants forced to ration their water yield concentrated flavor-bombs as produce. Dry-farmed tomatoes and water-stressed grapes are a great example—they yield fewer pounds per acre than the same plants watered more frequently, but the resulting flavor is unparalleled. If we go beyond the garden, into the wild these factors are even more magnified. Plants carefully stressed by a skilled farmer can be great, but it’s difficult to recreate the struggle that comes from random challenges encountered by wild plants. Wild herbs, vegetables, and fruits lead crazier lives than their domesticated cousins, and their heightened flavor usually reflects that journey.

The Flavor of Microbial Struggle

If cells are the factories that drive the struggle industry, microbes fill a floor-level role on the flavor production line. The flavor of microbial struggle stems from the community dynamics of vast legions of microbes, and ferments that feature a diverse range of activity often produce the most profound flavors. When resources are plentiful and everyone in the microbial community is comfortable and homogenous, they produce a lot of the same stuff. Refined, industrial white bread, for example, is baked with a focus on efficiency and consistency: easy-to-digest, simple grains are fed to a very homogenous population of yeasts, which are kept at their optimum temperature. The result is a quick-rising loaf that can be cheaply produced at scale. The downside is that in their efficient haste, those yeasts produce carbon dioxide and ethanol, and not a lot else.

Many of the best bakers in the world take the opposite approach, creating explosively flavorful bread by fermenting hard-to-digest, complex whole grains with a naturally diverse mixture of yeasts and bacteria at low temperatures. As they chip away at bits and pieces of their food, this struggling mélange of microbes generates a stream of taste and aroma compounds that is turned into a deluge by the transformative fires of the oven. This slow, tedious, inefficient slog of microbes is an investment in the long game, yielding less instant gratification, but a hell of a payoff in the end.

There’s Such A Thing As Struggling Too Much

Like most things, the flavor of struggle will inevitably yield to the law of diminishing returns if taken too far. Feral plants can become so bitter, pungent, and woody that they are inedible, ferments can be spoiled by the wrong interloper, and wild animals can have flavors that are too overpowering and gamey for even the most skilled cook to manage.

Even outside of these extreme cases, organisms need time to heal before the benefits of struggle manifest. Animals that recently gave birth, travelled a great distance, or overcame some other intense struggle become so depleted of the sugars, nucleotides, and fat which normally make meat sweet, savory, and succulent that their meat loses a lot of its flavor until the animals can replenish what the recent struggle depleted. Similarly, vegetables that have just gone to seed and molds that begin to form spores often decline in flavor quality as they funnel all of their resources into perpetuating the next generation.

The way that an animal is slaughtered also plays a huge role in the flavor of its meat. The meat from livestock slaughtered in calm, peaceful surroundings retains much better flavor, texture, color, and even shelf life than livestock unceremoniously dispatched in a putrid smelling, noisy slaughterhouse. The difference between struggle and suffering is one occasion where ethics and palate align.

Ultimately, the flavor of struggle, while robust and complex, is not for everyone. Plenty of people prefer food that is mild, tender, and easy to cook. But for the rest of us, it’s important to remember that what doesn’t kill flavor usually makes it stronger.

Ali Bouzari is a culinary scientist, educator, and co-founder of Pilot R+D, a culinary research and development company. His book Ingredient will be published in September 2016.