Scientists share the most dangerous things they work with 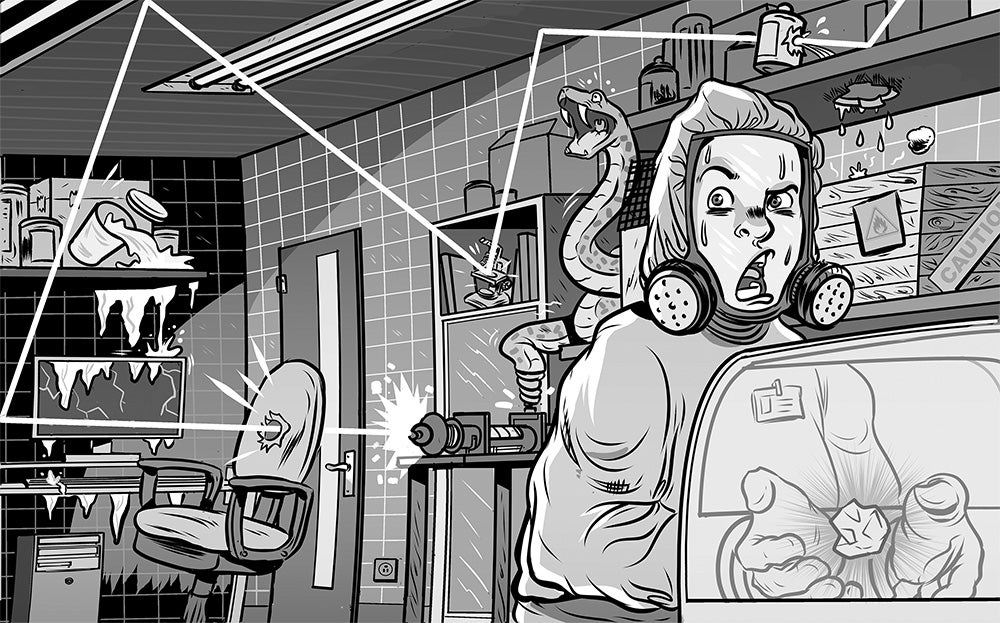 You might expect scientists to encounter hazards out in the field. But laboratories aren’t safe havens either. We asked researchers about the most dangerous things they work with.

To study the intrinsic properties of materials like atomically thin semiconductors, we need to get rid of heat, which causes subtle vibrations and makes our data fuzzy. We use liquid helium to cool substances to minus 453°F, a bit warmer than space. Our lab pipes it through a closed system to avoid having to transfer—and risk spilling—the expensive liquid. If that happened, the helium could evaporate, burn off your skin, or displace oxygen so you’d suffocate.

↑ Donald Umstadter, director of the Extreme Light Lab at the University of Nebraska at Lincoln

My lab develops imaging techniques using the Dio­cles Laser, which produces a beam roughly 1 billion times more intense than light on the surface of the sun. But with proper training, it’s actually very safe because we focus it in a pulse that’s less than a trillionth of a second long, in an area roughly a millionth of a square meter, and keep it all inside a closed box. Someday we even hope to supplement traditional X-rays with less-­radioactive Diocles imaging.

↑ Jeffrey O’Brien, recent doctorate in chemistry from the University of California at Irvine

Antivenins work for specific species. Our lab ­decided to make one from nanoparticles that inhibit the toxins of many types of snakes. To test it, we ordered about 15 venoms, which we stored in a frozen box marked with a skull and crossbones. These samples come from the world’s deadliest reptiles, such as the black mamba, so they must not get into your bloodstream. Even when you’re weighing out the freeze-dried powders, you’re hyperfocused.

I was one of four students to represent the United States in the International Chemistry Olympiad, competing against kids from 75 other countries. In one round, the judges tested our ability to synthesize 2-naphthoic acid and chloroform, a common anesthetic, from a food flavoring. The process also creates hypo­chlo­rous acid, which can cause serious burns and blindness. Even though this acid is dangerous (it’s very unstable and reactive), it’s pretty common in chemistry.

My team is creating a database that could help law enforcement trace plutonium, used in nuclear fuel and atomic bombs, back to its country, or even specific reactor, of origin. Something as seemingly ­minor as the temperature of the facility can give the material completely different colors. To under­stand these changes, we re-​create them in a lab. Naturally, we keep our plutonium samples in a lead-lined container, wear at least two pairs of rubber gloves, and track radiation levels in real time.