This easy-to-DIY cured beef delivers a power punch of spice. 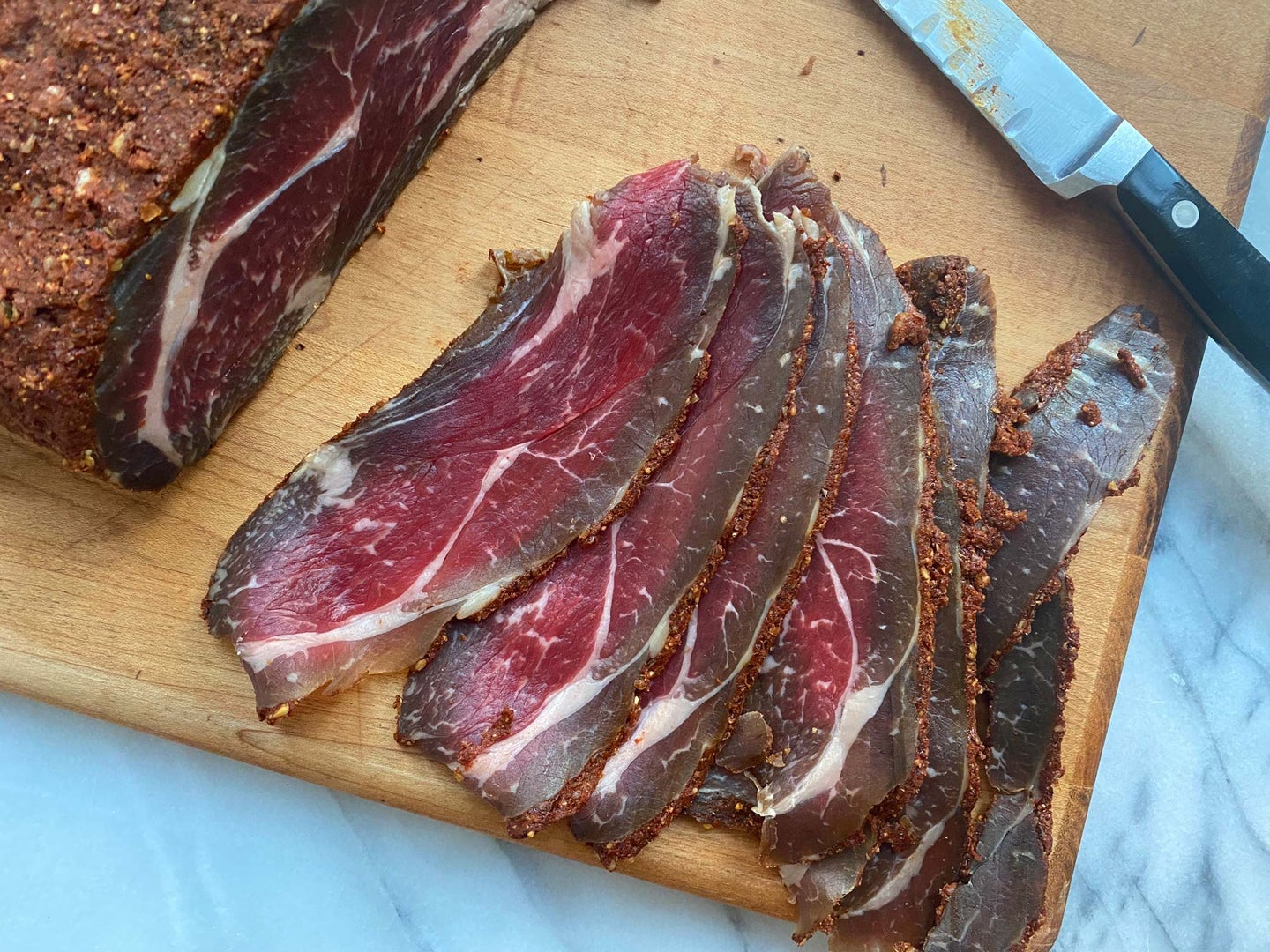 If this is the first time you've ever heard of basturma, boy, you are in for a treat. Kat Craddock
SHARE

Basturma is to Armenia what bresaola is to Italy and cecina is to Spain—a ruddy hunk of air-dried beef with more umami punch per mouthful than the fanciest dry-aged steak—except it’s far more exciting. Unlike its simply-salted European brethren, basturma is garlicky and piquant and spiced with industrial quantities of paprika and fenugreek. It’s the type of cheese board item that draws instant oohs and aahs thanks to its crimson core and out-in-left-field flavor profile.

As far as charcuterie goes, basturma is shockingly easy to make, as we learned in this month’s installment of Saveur Cookbook Club featuring Lavash, by Kate Leahy, Ara Zada, and John Lee. You don’t need a meat grinder, sausage casings, or any other gourmet gewgaws to make basturma; the hardest part of this recipe is probably clearing a shelf in the fridge, or finding a two-week stretch when you’ll be home to occasionally drain, flip, spice, and hang the meat. (That said, even the curing times are forgiving.) But before we get ahead of ourselves, let’s delve a little deeper into this iconic Armenian snack.

Basturma has two origin stories, one romantic and one…well, more likely. The former posits that the dish was invented by Central Asian horsemen. Before heading to battle, they would wedge fresh beefsteaks beneath their saddles. As they rode, the animal’s sweat—whew, stay with us—would salt the meat, while the constant pounding would tenderize it, yielding a protein-packed snack fit for quick consumption. (To our mind, the jury’s still out on what’s more hazardous: going to war or eating horsehair-covered carrion.)

Though saddle salami makes for a colorful tale, it’s more probable that basturma hails from the Byzantine city of Caesaria Mazaca (now called Kayseri) in present-day Turkey, where the ancient technique of pastron (salt-curing) is said to have been perfected by Armenians in Late Antiquity. In fact, basturma-making was such a popular vocation among medieval Armenians that Basturmajian (“basturma maker”) became a family name that’s still in use today.

Basturma is beloved to Armenians. In the country’s capital, Yerevan, the best place to enjoy this lean, air-dried beef flavored with garlic and chemen (the mix of pungent spices that’s heavy on fenugreek and paprika) is while sitting at the outdoor cafe named in its honor. Basturma, located on Abovyan Street in the city’s center, is owned by Jirair Avanian, also the proprietor of nearby Dolmama, one of Yerevan’s first, and still-venerated, fine-dining restaurants. Avanian had the idea right with this tiny location, as it is always packed with people leisurely enjoying a glass of wine while they snack on basturma and people-watch.

How to: a DIY primer

So, what defines a perfect basturma? Experts will tell you that the meat’s center must be deep red, a sign of freshness and expert curing. On the exterior, the spice coating, or chemen (sometimes chaman), should be fresh and fragrant on the nose and packed on generously. Most importantly, the meat must be stiff all the way through with a low moisture content, which translates to a long shelf life. Here are a few important tips from the authors on making basturma at home.

Choose the right cut. Leahy et al. recommend using eye of round—a lean, dense cut from the the upper hind leg of the cow. Fattier cuts don’t have the right fibrous texture and won’t dry out properly. (They’ll also spoil faster.) Other Armenian cookbooks recommend beef tenderloin; when in doubt, ask your butcher for a lean yet tender cut, and opt for the best-quality beef available.

Find a cool corner. To prevent spoilage and ensure the right consistency, hang the basturma someplace dry that doesn’t exceed 70 degrees Fahrenheit. A cold basement or wine fridge is ideally suited to curing, though a standard refrigerator will work in a pinch—just plan ahead, since at cooler temperatures, the meat will take longer to cure.

Check the expiration date on your spices. This recipe is all about the bold, floral flavors of Caucasian spices, but the most prominent one, fenugreek—ideally the Caucasian blue variety, available here—loses its tang more quickly than most. Source your spices from a trustworthy source, and make sure they’re less than a year old.

Shave paper-thin slices. Basturma’s soft, melt-on-your-tongue texture is half its allure, so clumsy chunks won’t do. Gearheads with meat slicers (like this beauty from Chefschoice) will have no problem churning out paper-thin ribbons, but for those of us doing the job by hand, Leahy et al. recommend throwing the basturma into the freezer twenty minutes before slicing and then reaching for the sharpest knife you own.

Think outside the board. Yes, fanned-out slices of carpaccio-esque basturma look fabulous on a charcuterie board, but basturma is equally delectable sandwiched between fluffy slices of Armenian matnakash or your favorite bread—just add pickled veggies and perhaps a scraggle of chechil (Armenian string cheese). Chopped into tiny bits, basturma also adds a pleasant funk to tossed salads and a meaty depth to omelets (wrap the egg up in lavash for the Armenian version of the breakfast burrito), garlicky mashed potatoes, and even mac ‘n cheese.

Time: 11-18 days, depending on the temperature