We asked for your best photos of frozen soap bubbles—and wow, did you deliver

PopSci readers made their own DIY ice orbs. 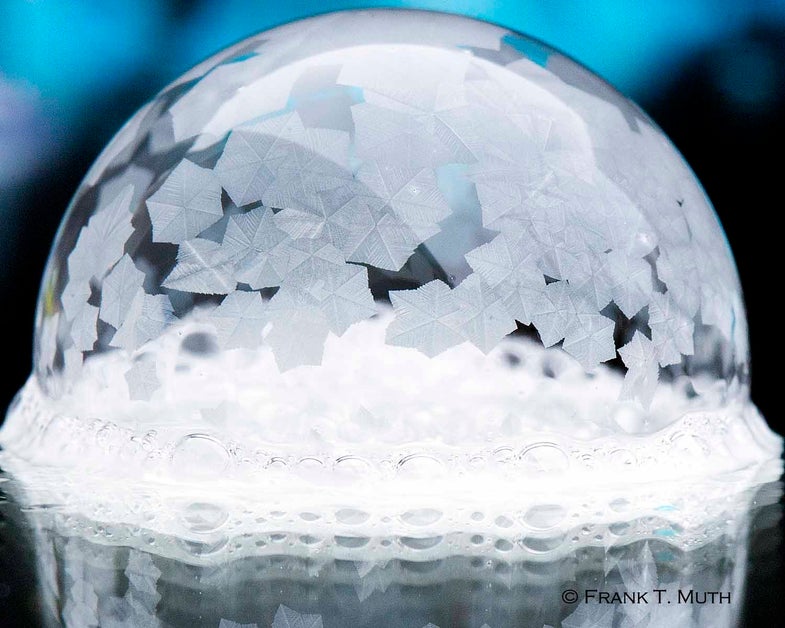 When most people experience a cold snap, they huddle indoors. But you, dear Popular Science readers—you venture out for a little DIY.

During the winter, Canadian photographer Chris Ratzlaff ventures into the great outdoors to photograph soap bubbles as they freeze. Naturally, we had to talk to him about how to make our own frozen bubbles. In our original story, we provided DIY instructions and invited you to try the same project, then to share your photos and videos with us at manual@popsci.com.

So, when temperatures plunged recently, a few readers braved the cold. The results are breathtaking. 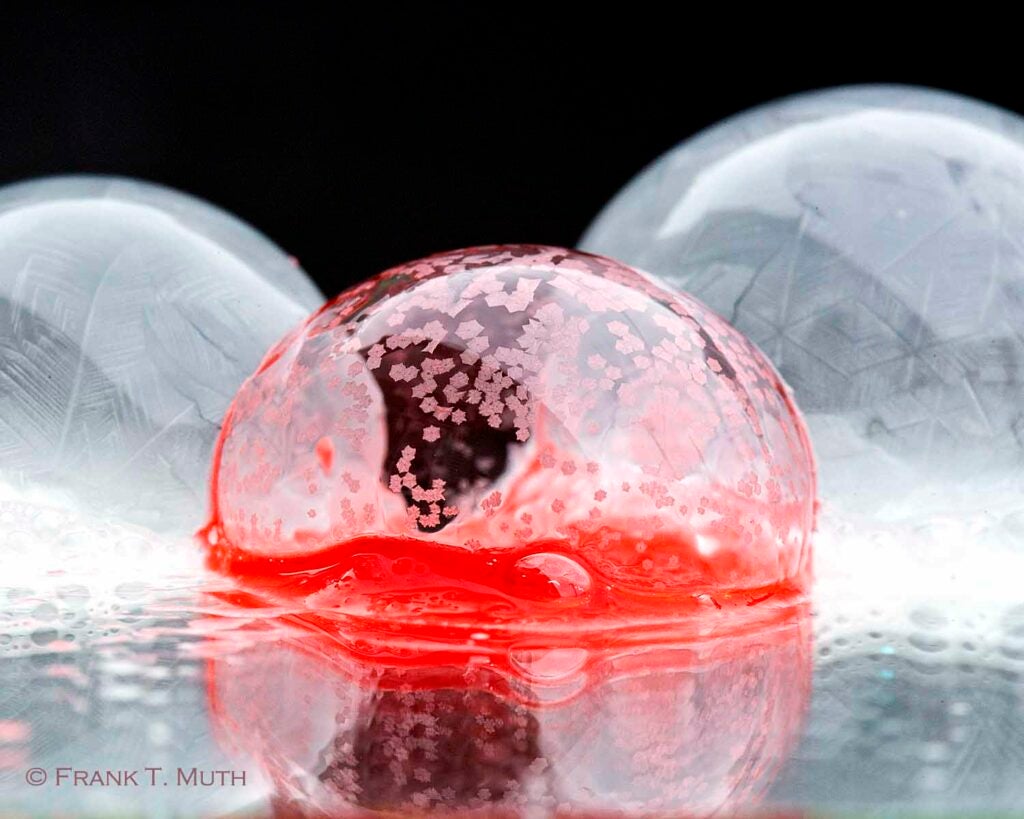 Although Ratzlaff recommended waiting for temperatures below -13°F in our original article, wildlife biologist and amateur photographer Frank T. Muth got the project to work in the warmer clime of Inwood, WV. Muth found that ice crystals would form at temperatures as toasty as 16°F.

To make his crystal-clear images, Muth asked his wife Jenn to place the bubbles on a mirror while he prepared his camera for the perfect shot. “If I tried [to place the bubbles], by the time I focused the 100 mm macro lens, the bubble was completely frozen,” he told Popular Science in an email.

Muth also experimented with adding food dye to his bubble solution. “The red, green, yellow, and blue food coloring worked well,” he said. “But I still prefer the pure white.” 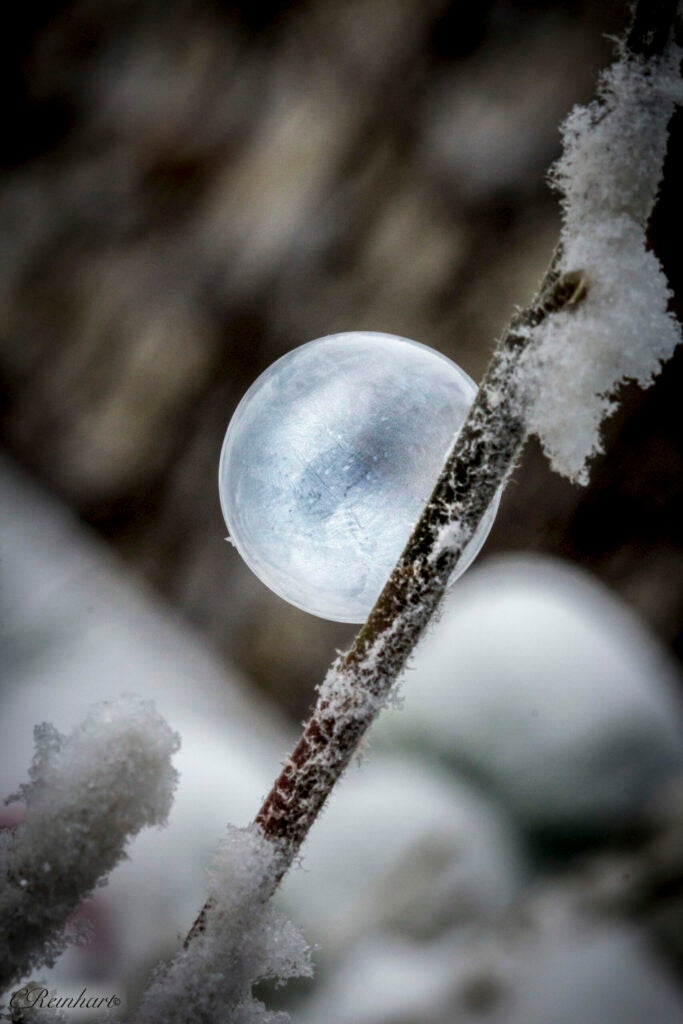 Perched on a branch

Teacher Catherine Reinhart braved Calgary, Canada temperatures of -13° to -22°F to place her frozen bubbles outside. “Not much can get me out of the house in -30°C [-22°F], but this sure did,” she wrote in an email to Popular Science. “The most difficult thing about shooting photos of ice bubbles is holding the bubble wand with mittens on your hands!” 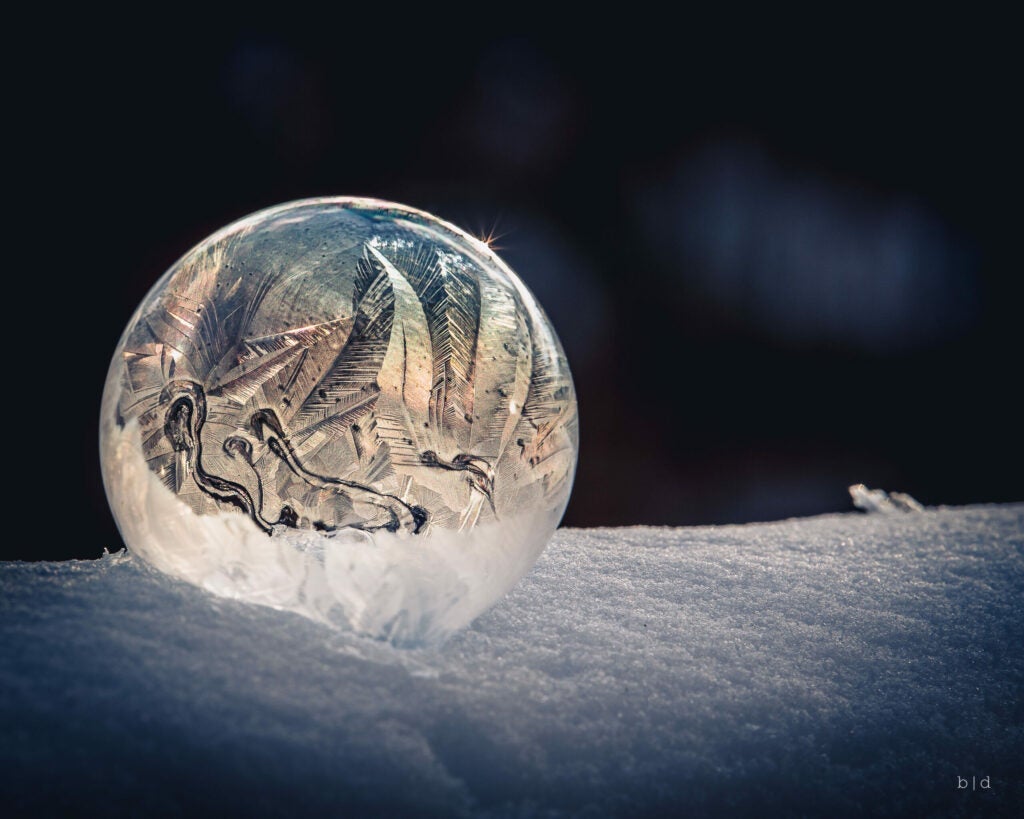 Ohioan Brian Dillinger—employed, in his words, as “IT by day, photography by fun”—included light corn syrup in his bubble mix, as our project instructions suggest. However, he’s eager to tweak the recipe. “I’m waiting for the temps to dip again to try it with glycerin,” he told Popular Science in an email, “to see if there’s different crystallization or strengths.”

Some of Dillinger’s pictures (keep scrolling to see more of his images) appear colorful. But unlike Muth’s bubbles, which incorporate food dye, Dillinger’s get their hues from the interplay of light and ice. 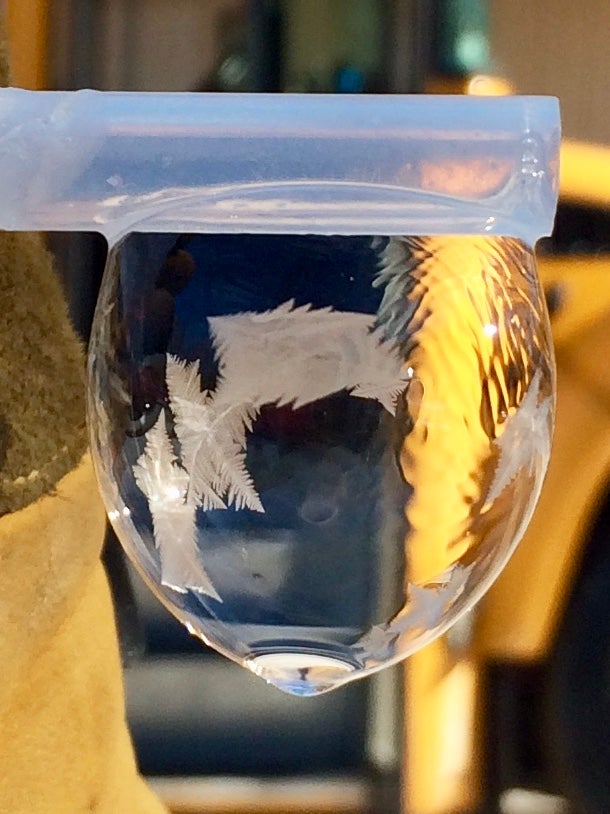 From Chad and Bri Swope in Iowa City, IA.

In Iowa, Chad and Bri Swope not only made their own bubbles, but also shared the project with young outdoor enthusiasts at the University of Iowa’s Snowy Owl Camp program.

“We had fun out at our Snowy Owl Camp with the bubbles, drilling holes in the lake, and making snow quinzees!” Chad Swope told Popular Science in an email. 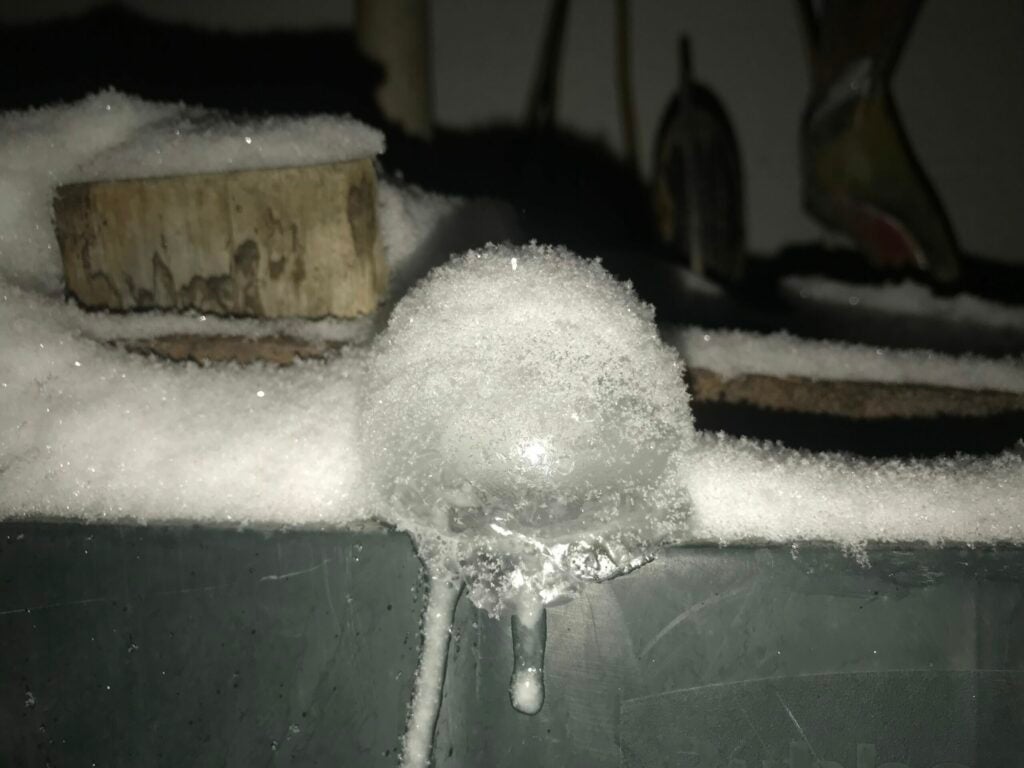 In Calgary, Canada, temperatures were so low that married couple Ken Chilton, an IT manager, and Ronaye Tanner, a child care professional, managed to create a frozen-solid bubble that lasted for days. They decided to try the project when they saw that temperatures had plummeted, ultimately reaching -15°F. Although the wind gave them trouble at first, they eventually found a relatively calm spot: a garden tool holder beside their shed.

“Most of the bubbles we did popped, of course, but this one stood strong, even as the snow started to fall,” Chilton wrote in an email to Popular Science. “It lasted about four days before the temperature started to rise and it melted away.” 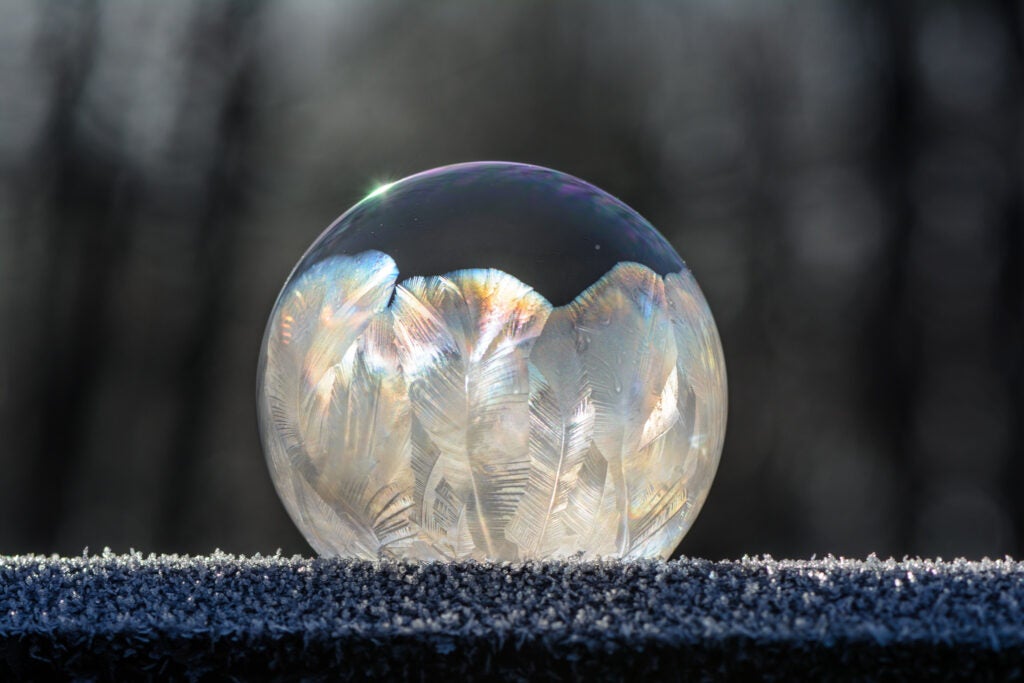 Mariette McDonald, a retired Systems Analyst, had better luck with the wind in Stillwater Lake, Nova Scotia. “Ideal conditions with lots of time to play around with different lenses,” she told Popular Science in an email. “I shot over 500 pictures of frozen ice bubbles in an hour.”

In addition to experimenting with lenses, McDonald tweaked the recipe for bubble mix, adding a tablespoon of glycerin to increase the orbs’ durability. Then she placed the bubbles on the frozen railing of her back deck. “It was so much fun,” she said. 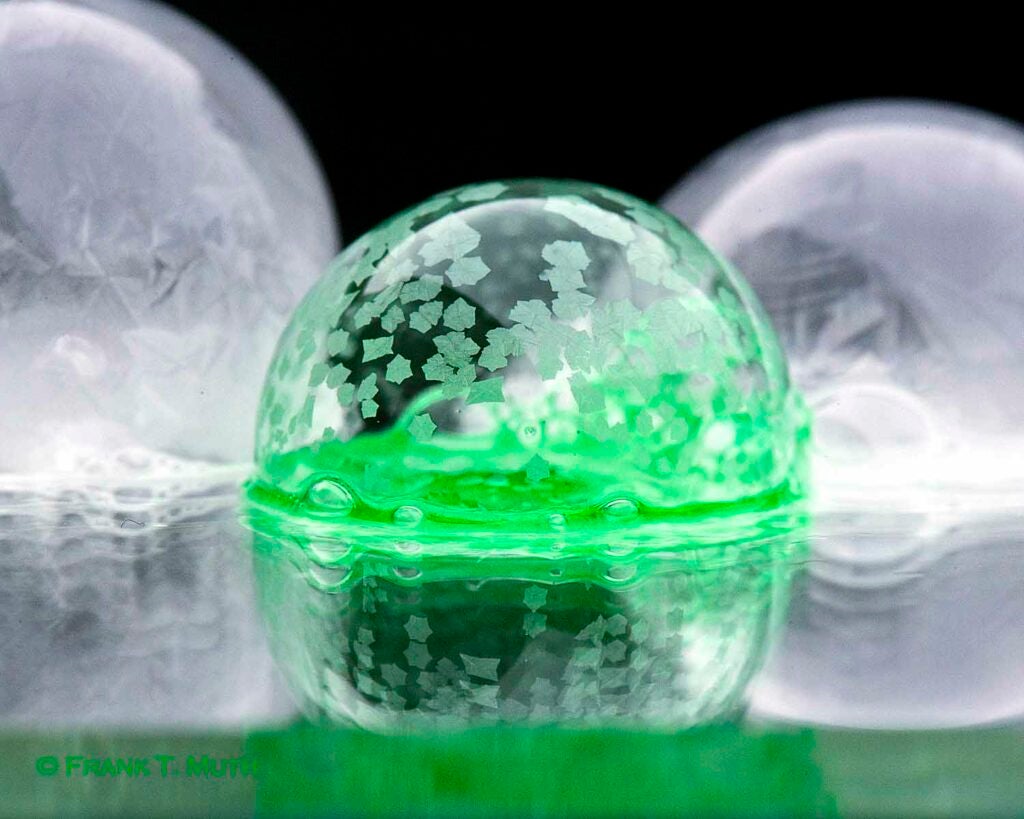 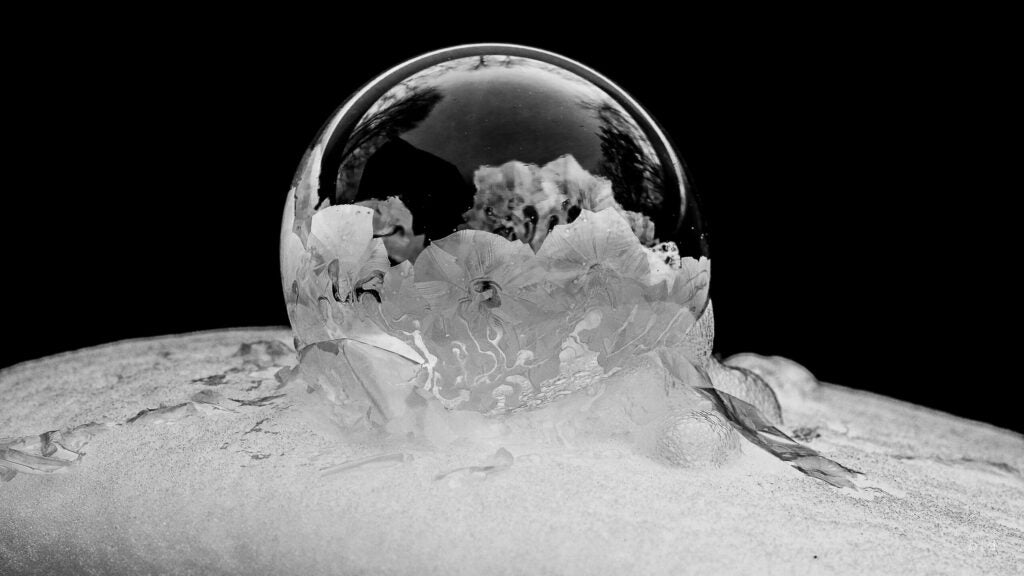 In addition to images, the Swopes sent us this video of a bubble freezing in real time. You can watch tiny patches of ice slowly form on the sphere’s surface. 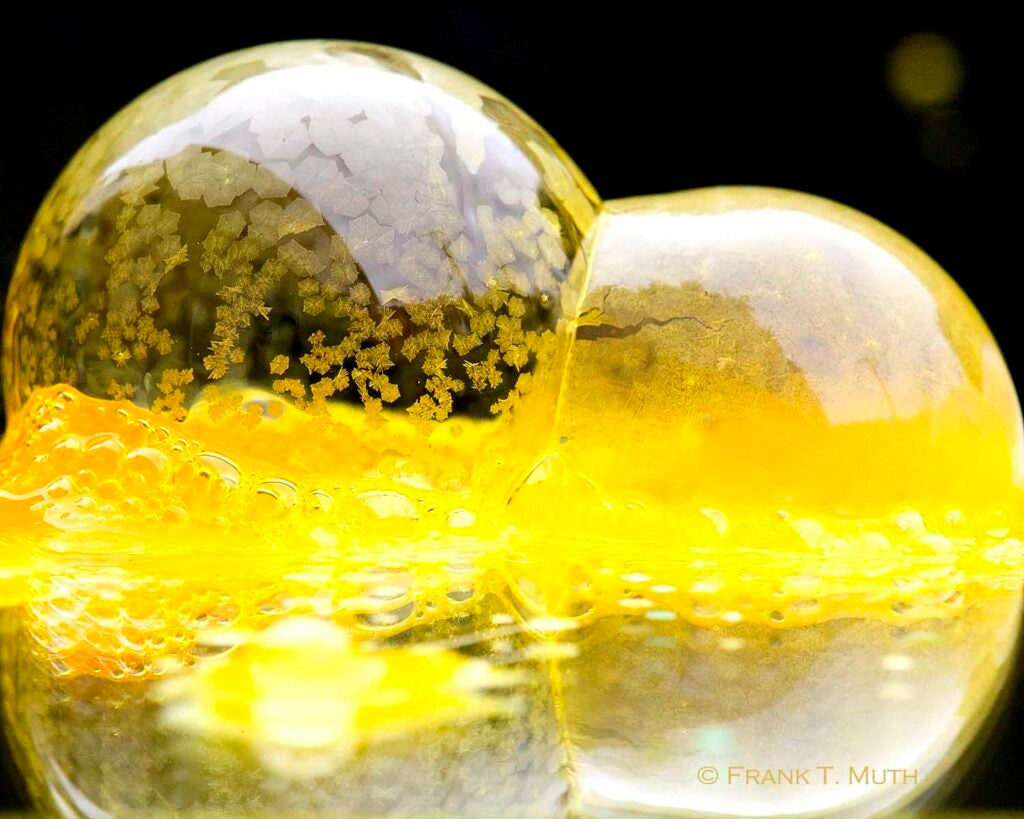 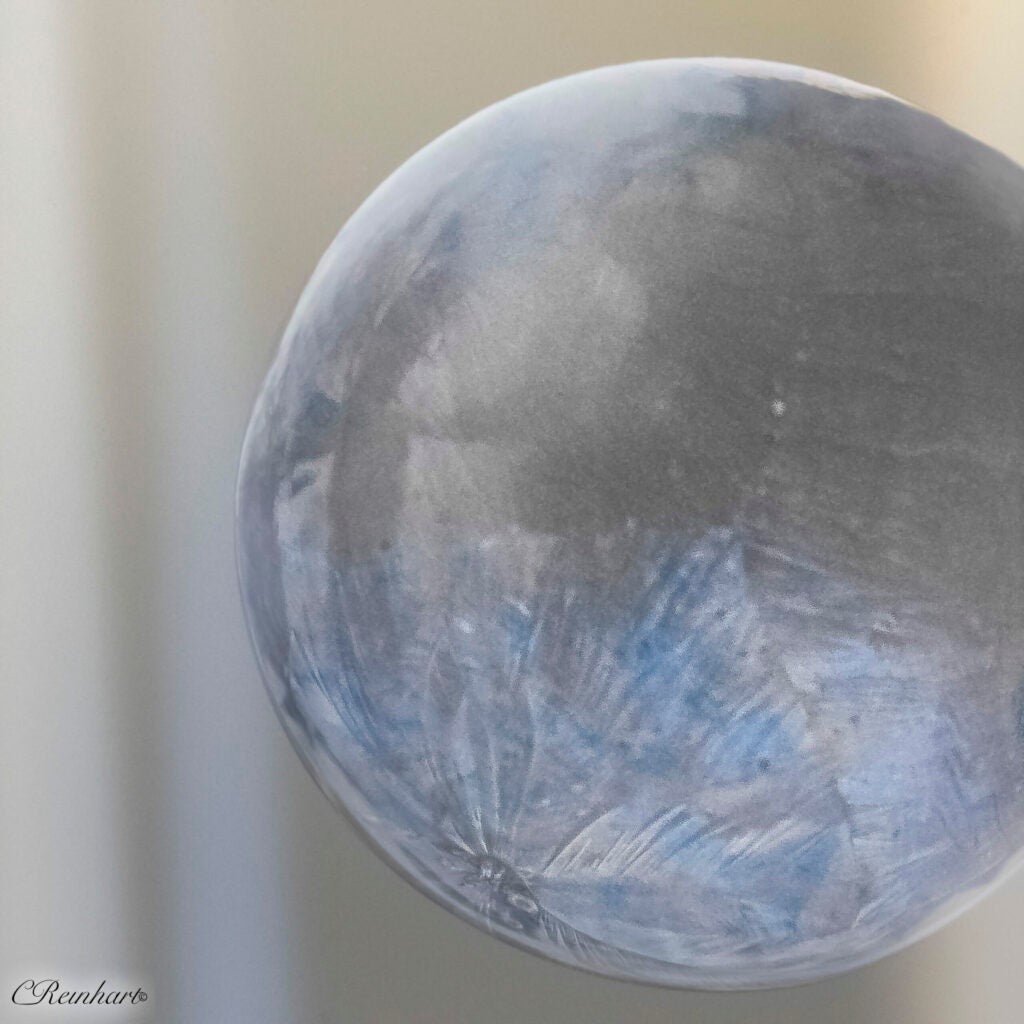 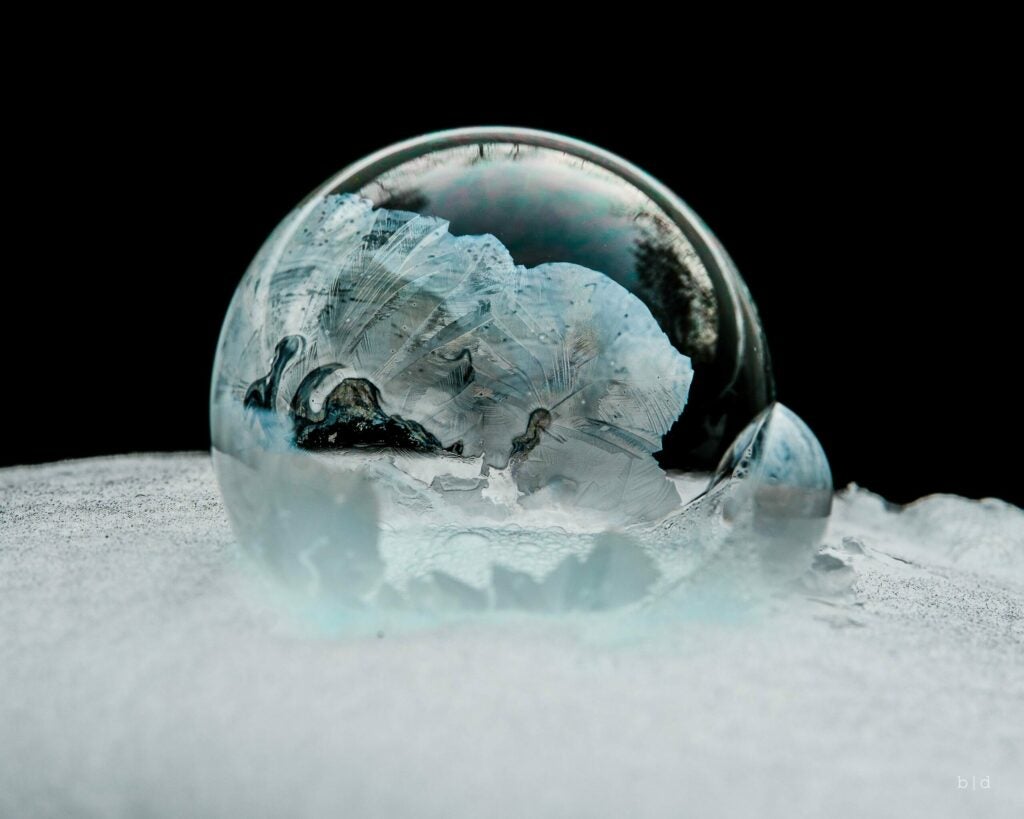 In Syracuse, NY, The Post-Standard photographer Scott Trimble created a video that shows off three bubbles freezing in real time.

“The temperature only got down to about -2°F and very windy,” he wrote to Popular Science in an email, “so I made probably about 2000 bubble attempts to get three decent ones to last long enough.” His work has already been published on syracuse.com, the website of The Post-Standard. 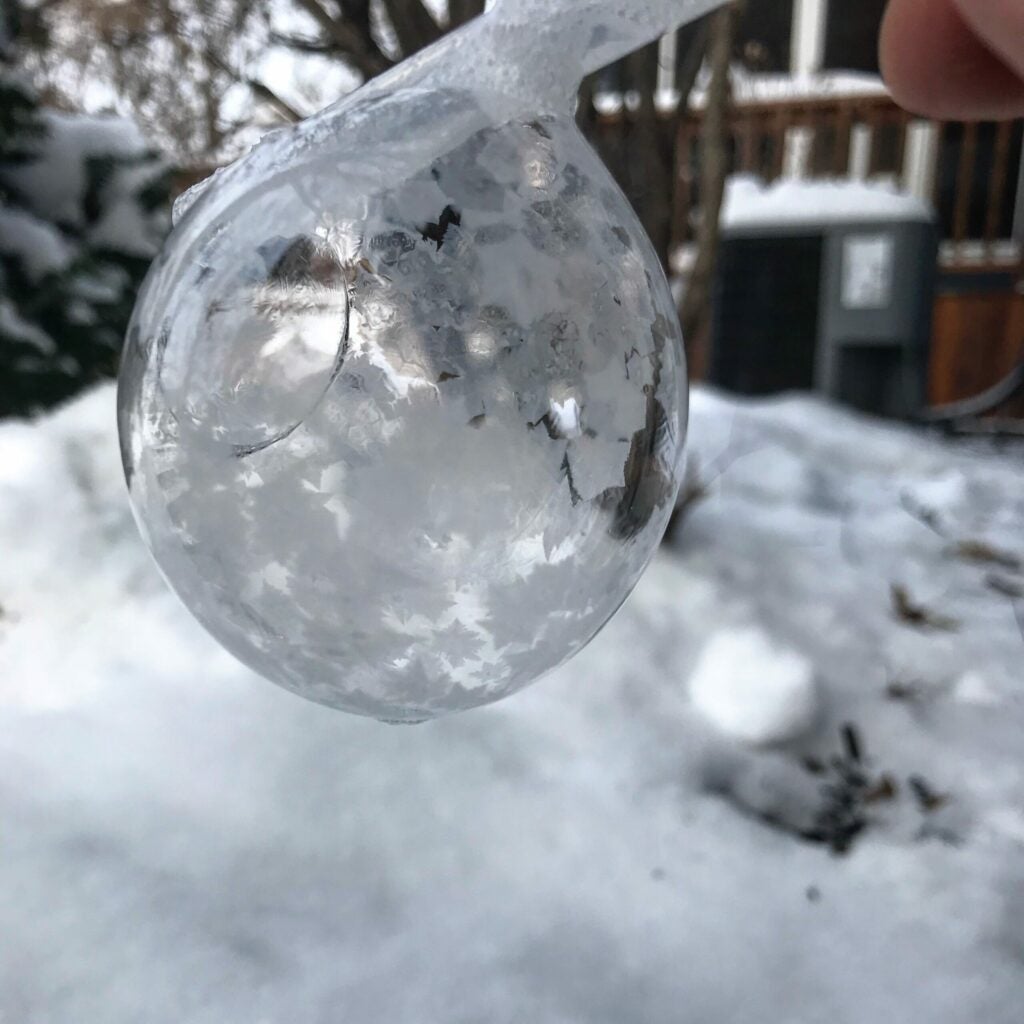 From Chad and Bri Swope in Iowa City, IA. 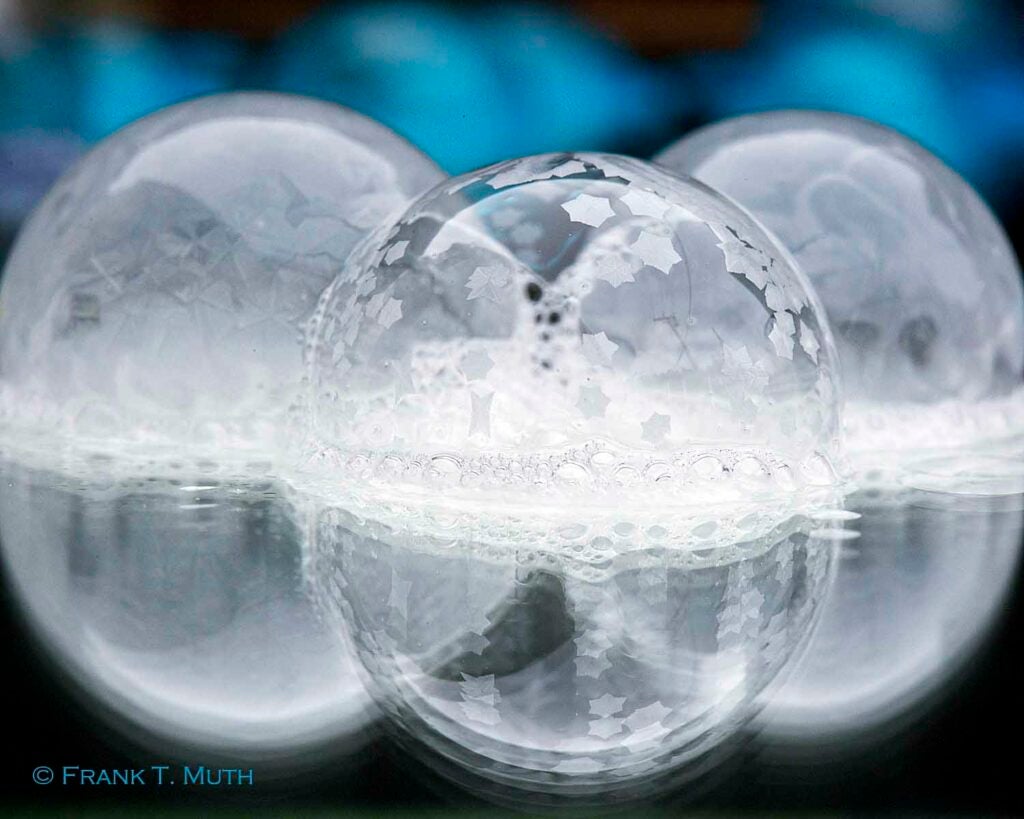 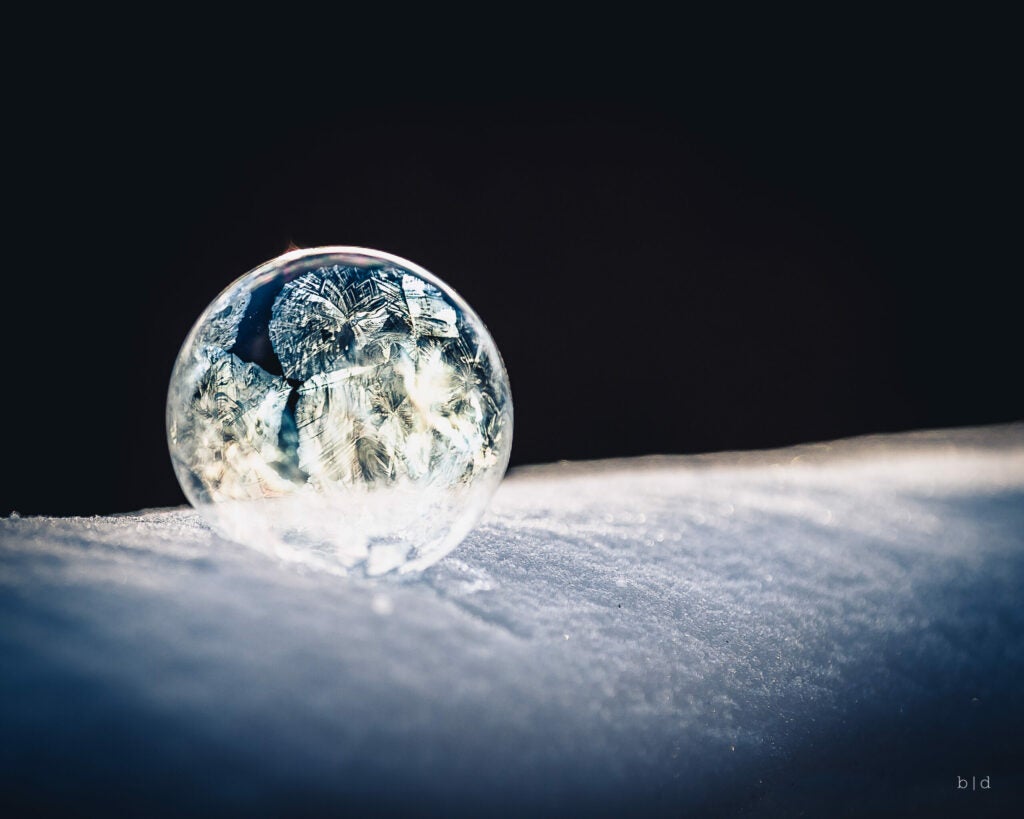