How to find the best apps—and avoid the duds 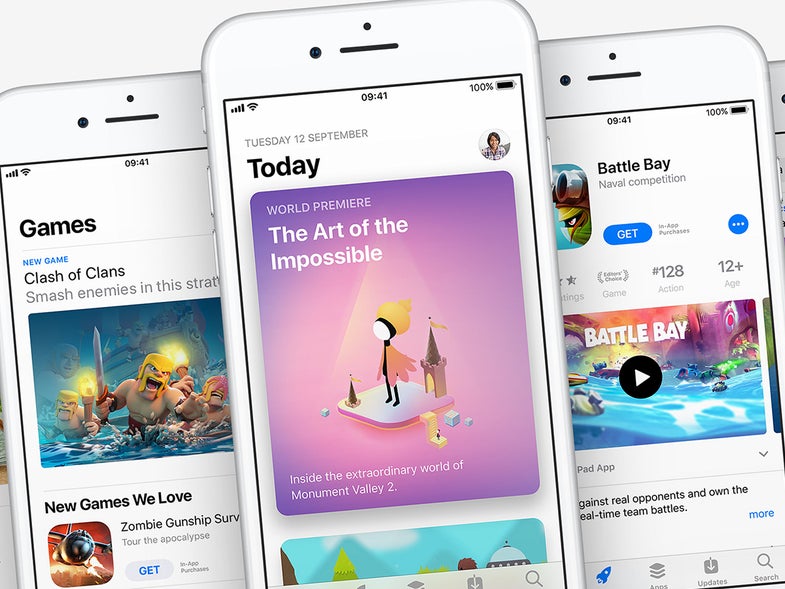 To make your life as convenient and productive as possible, you should fill your phone with the most fun and useful apps available. But with millions of app-store listings to check out, you can easily waste time on pointless or even dangerous programs. How can you distinguish the winners from the subpar offerings? Here are a few tips to improve your app-hunting game.

The tech giants behind iOS and Android devices want to help you find the best apps out there. In fact, they’ve designed their digital stores around this principle.

When Apple released iOS 11, they included a redesigned iOS App Store, giving it a visual overhaul that makes it easier to see the best apps. Open the App Store on your phone, and you’ll see it looks cleaner and more accessible than in its previous incarnation. Apple sorts everything into overarching categories, so select either the Games or Apps tab, depending on your objective. Within each of these sections, you’ll find subcategories like “New Apps We Love” and “This Week’s Favorites,” which promote apps that Apple staff and regular users seem to like. Keep scrolling and you’ll reach topical lists—around the holidays, for example, you might see games you can play with other people. Some of these lists target you specifically, based on items you’ve already downloaded. Browsing through these curated options can turn up great new apps.

On Android, you’ll find a similar situation: Google’s Play Store prominently displays the best new and classic apps for your enjoyment. Open the Play Store app on your phone to see staff picks, trending apps, and popular games. Further down, you’ll find recommended apps, chosen for you because of your past phone activity. You can also browse through categories such as entertainment or phone-customization apps. Finally, you can check out the very top-rated apps and games to make sure you’re not missing out on something good. However, the apps riding the highest in the charts tend to be big names that you may have already downloaded.

Venture outside the app stores

Want to learn about new apps before they show up on app-store rankings? Keep an eye on the latest tech news. Tech writers spend all day, every day immersed in apps and phones. This knowledge lets them recommend groups of apps that most other people have never heard of. You can also follow your favorite tech writers on

App fans can hear from their peers at the tech portal Product Hunt, which aims to help readers discover the hottest trends. Visit the website and then click the Tech or Games links on the left. You’ll see rated app recommendations, with rankings dependent on users’ votes.

Don’t forget social media. Review hashtags like #apps or #newapps on Twitter, for example, to find worthy programs. While this option can be more hit-or-miss than tech news or Product Hunt, it can occasionally direct you to hidden gems.

Speaking of social media, if you find apps you like, make sure to follow the developers on Facebook, Twitter, and other platforms. You’ll receive a heads up on new and upcoming releases, and perhaps see some recommendations for other apps and games. While you’re at it, follow your favorite tech journalists to see what they recommend.

Finally, friends and family members can reveal great new programs, especially games. The next time you meet up with a buddy who has similar tastes, get her to demo her favorite new app. You’ll get the opinion of someone you trust, and you can also see the app in action before installing it.

Apple and Google work hard to keep low-quality and harmful apps out of their respective stores. So as you browse, you’re unlikely to encounter anything that genuinely threatens your device’s security. Still, better safe than sorry—here’s how to minimize the risk of installing a bad app(le).

App reviews and ratings aren’t a perfect system, but they give you a general idea of other users opinions. Look beyond the number of stars to see what their reasons are—their objections may or may not matter to you. Low ratings don’t necessarily mean the app is bad, but they could indicate a bug or a troublesome update. To see whether the developer has resolved any problems, check for responses under the reviews.

Once you’ve found an app you’d like to try, remember to read the listings page before downloading it. This will show you how much the app costs and whether it charges in-app payments. Carefully read through the description to check what you get for free and what you don’t.

When you open the program for the first time, it will ask for certain permissions, such as access to location data. If you’re not comfortable granting that permission, then just say no. You can check which apps are allowed to do what in your phone’s settings. In the iOS Settings app, choose Privacy then a category; in the Android Settings app, select Apps & notifications, App permissions, and then a category.

Most of the time, you should be able to spot a bad app from its ratings, reviews, and screenshots. But if the worst happens and you do install a dud, just go ahead an uninstall it: On iOS, tap and hold on its icon, then tap the cross button; on Android, tap and hold its icon, then drag it up to the Uninstall box.